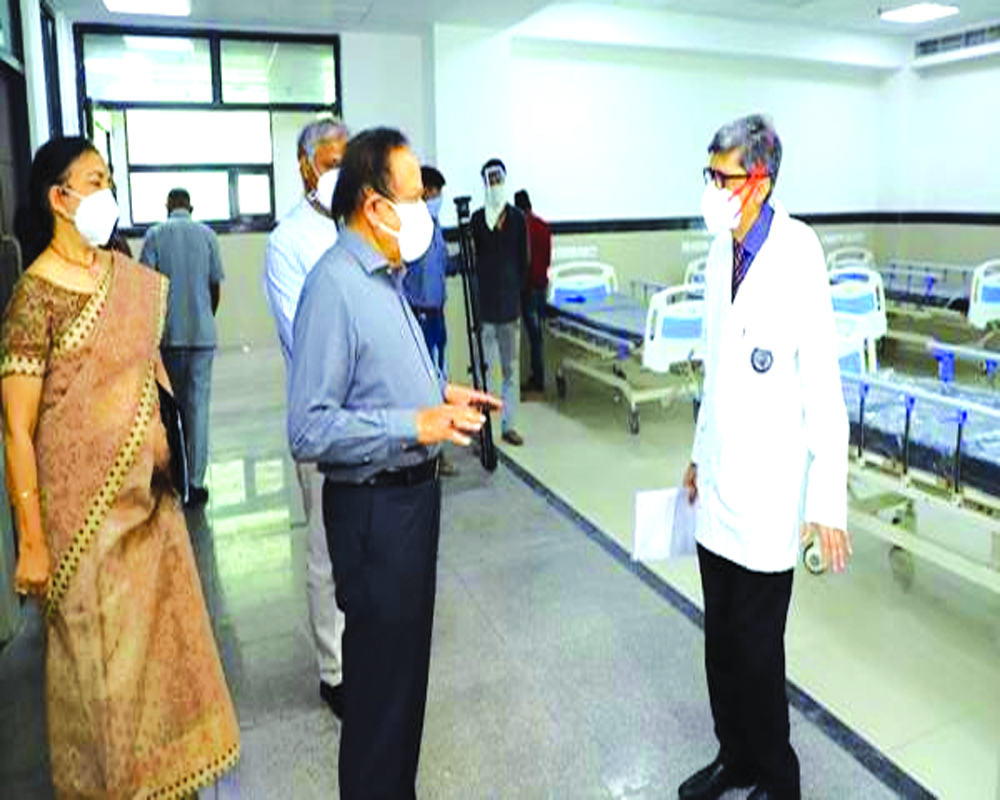 Burdening Ministers with three Ministries can seldom be a formula for success. It cannot be averred that the Modi Government has shed deadwood and found the manna

Under the much-touted logic of “perform or perish”, Sadhvi Niranjan Jyoti has apparently emerged more efficient than, say, Ravi Shankar Prasad or Dr Harsh Vardhan. The MoS, Rural Development, has not merely saved her own portfolio during Cabinet reshuffle but added one more charge, ie Consumer Affairs, Food and Public Distribution, to it. Several heavyweight Cabinet ministers were dropped like deadwood from their Ministry. There is no deal in sight on the lines “Kamraj Plan” (1963), which suggested that senior Cabinet Ministers in the Nehru Government should resign to work for revitalising the party.

Ravi Shankar Prasad, Harsh Vardhan and Prakash Javadekar were educated and suave faces of the Government. Each one of them came to occupy up to three Union Ministries. Was the Prime Minister’s trust in them so misplaced that these senior leaders had to be dropped for non-performance without any honourable rehabilitation plan? Why there was no mid-course correction applied?  Is the Prime Minister sure that he made the right choices now by inducting a large element of untested people? Does by dropping senior Ministers, he wishes to send a stern message to the inductees that in the long run no is indispensable? For better or worse, these people will lead the Modi Government’s programmes into the 2024 elections.

When one burdens a Cabinet Minister with three Ministries, performance is at risk. It was only under this Government that one sees that the Railway Minister might hold charge of two other Ministries. Previous Minister of Railways who was additionally holding the charge of Commerce and Industry Ministry, also found the Ministry of Consumer Affairs, Food and Public Distribution falling in his lap as Ram Vilas Paswan passed away in October 2020. Thereby Piyush Goyal had to negotiate with the agitating farmers alongside the Minister of Agriculture, viz Narendra Singh Tomar.

The new Railway Minister, Ashwini Vaishnaw, has also the charge of two more Ministries, Communication and Electronics and IT. The MR Cell — or the Railway Minister’s Office — will now work in two shifts lasting from 7 am to 12 am. The extended hours do not constitute overtime, but indicate the Minister’s efforts to juggle with three Ministries. While Vaishnaw might depend upon his razor sharp intelligence, the same might not be said about Mansukh Laxmanbhai Mandaviya, who has been in news for his old tweets in outrageous English. Promoted to Cabinet rank, Mandaviya has been given charge of two Ministries, including Health. It was not a good idea to remove a doctor-turned-senior politician from the helm of the Health Ministry in the middle of the pandemic. While one should not be culturally prejudiced against under-proficiency in English, it would become a handicap during the pandemic when a Minister has to pursue research briefs on COVID, mostly of foreign origin and invariably in English.

Despite the BJP’s hype on cultural nationalism, education and culture have remained two non-priority sectors in the Modi Government. It never had HRD and Culture Ministers who could instil confidence. Many of the research organisations went headless for years, or like Asiatic Society continued to be ruled by people averse to this Government. The AB Vajpayee Government had an academician in the form of Murli Manohar Joshi as the HRD Minister. There was a sincere attempt to revise the textbooks, which subsequently the UPA-I Government overturned in the name of “de-toxification”. In the Sangh Parivar circle, one frequently hears complaints about books written by “Leftist historians”. However, the Modi Government has done little to redress the situation in the last seven years. One of their HRD Ministers proudly declared that the Modi Government did not change even a chapter in history textbooks.

The Education portfolio is now in the hands of Dharmendra Pradhan, who has been Petroleum and Natural Gas Minister since the first day of Modi Government in 2014. A thorough gentleman and hardworking Minister, he might do his best for education. However, it shows that the Government is not inclined to treat Education and Culture any differently from say agriculture, petroleum, textile or chemical industries. If the PM can induct professionals/former bureaucrats/diplomats to head other Ministries, why not any eminent educationist/cultural personality was brought to head Education/Culture Ministries? All the tall talks about “Sanskritic Rashtravaad’ (Cultural Nationalism) actually holds very little water.

Babul Supriyo, once the blue-eyed boy of PM Modi, has also been dropped from the Council of Ministers.  Will Nishit Pramanik, the TMC-turned-BJP-MP, be able to prove his mettle as MoS, Home? Pramanik, who has several criminal cases pending against him, might be an expert turf dominator. However, when it comes to administration, it is a different ball game.

Apart from the pandemic, in the last two years, India had seen anti-CAA protests, Chinese incursion at Galwan river valley and the intense farmers’ agitation. The economy was not managed well, even before the COVID struck. However, not only the FM Nirmala Sitharaman survived the purge, but her deputy Anurag Thakur got promotion to Cabinet status. If one were to fix responsibilities, several other heads should have rolled by the logic. But an eye-for-an-eye principle would leave the world blind. The stakes are high for Modi’s new team in the remaining half of the Government’s tenure.