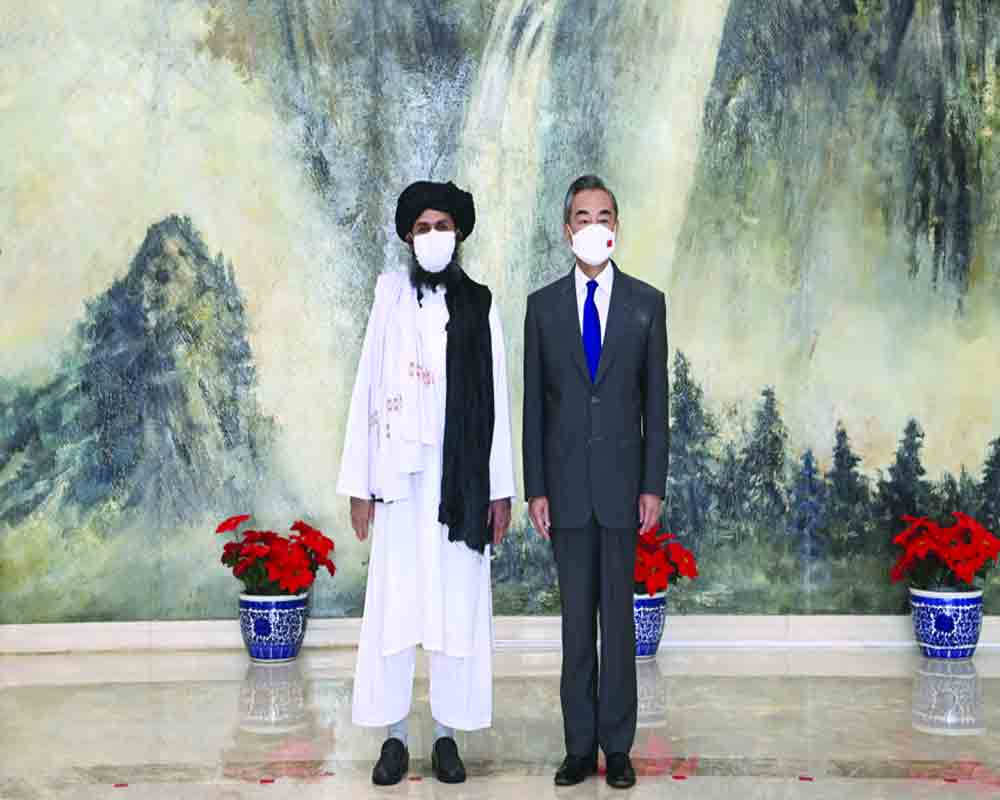 The Taliban leaders are desperately looking for global recognition and ties with world powers, while China under Xi aims to exploit the war-ravaged country for its economic interests. Therefore, the China-Taliban relationship seems symbiotic. However, looking at the Taliban’s past, the future of this new-found bonhomie looks bleak

China is in Taliban’s Afghanistan. President Xi Jinping is all out to make a deal with the mullahs. And it seems China is rejoicing the exit of the American and its allied forces from the Afghan soil. For China, it is a new ground to advance a unique model of foreign relations backed by crude economic interests with the Islamists in Kabul. But in Beijing’s objectives, there is no agenda to help bring back normalcy in Afghanistan wherein women, minorities and other vulnerable groups face threat to survival. It is clear that China’s goal in Afghanistan is its economic exploitation.

Now, the US withdrawal may mean many things. One, by moving away from one of the costliest wars, America will be able to focus on India-Pacific and most particularly on China’s growing aggression and expansion. Second, it has indirectly emboldened the Taliban, the Frankenstein America once created to take on its cold war arch rival and later fought with them fiercely to uproot the shelter of anti-US terror forces after 9/11. Third, the gap left by the US can be a new and ready ground to be filled by the Communists in Beijing. China under Xi has been desperately waiting for such opportunity, both to display their new world leadership and crude diplomacy.

However, the moot point is what China is expecting from war-ravaged Afghanistan. Truly speaking, it is really difficult to know how Chinese leaders are evaluating the fast-changing situation in this deadly country replete with rival tribal warlords and splinter terror groups from all around the world. Interestingly, the tribal warlords still hold sway over their redoubts. And all are waiting for their turn to come. The aim is to create more war fields and keep their frustrated cadre engaged.

Sources say that China aims to grab nearly $1 trillion worth value of mineral reserves still lying untapped across Afghanistan. It has been clearly outlined by a former colonel of the People’s Liberation Army, named Zhou Bo, in an article published in the New York Times last weekend. He wrote: “With the US withdrawal, Beijing can offer what Kabul needs most: political impartiality and economic investment. Afghanistan in turn has what China most prizes: opportunities in infrastructure and industry building, areas in which China’s capabilities are unmatched and access to $1 trillion in untapped mineral deposits.”

What a wonderful proposition to a deadly Islamic hardliner leadership that does not trust anyone, except probably the Pakistan Army and its intelligence. Xi and other Chinese decision-makers probably need to give it a second thought after analysing over two decades of America’s abortive trial and error methods to bring peace in Afghanistan.

It seems Beijing expects the Taliban will allow an inclusive government in Kabul for elusive peace to come and stay. It desires that the Taliban will form an inclusive government with the rival warlords, by allowing a basic minimum level of rights for women and minorities in the country. Besides, China claims that it wants the Islamists to keep in check all the terror groups that target the US, China, India and any other nation. These are all lofty dreams Beijing is floating to grab the economic opportunities in Afghanistan. But this would not be an easy game as it thinks. In fact, four decades of war in that country, really made any economic venture impossible for the natives as well as for outsiders. First the war started with the Soviet Army, the feuds between the tribal chiefs and finally the longest war was launched by the America and its allies in 2001 till date. All these conflicts have absolutely drained out the patience of the common Afghans who are now fully aware what is going to follow.

Kabul and Beijing are now partners in trouble. This week both the countries have established their first diplomatic contacts, as described a by a Chinese official as “unimpeded and effective communication”. However, this partnership can be troublesome looking at the past events and record of the group.

The Taliban took over Afghanistan by ousting the democratically elected Government of Ashraf Ghani on August 15. Ironically, the Islamists did not even wait for the formal withdrawal of American forces from their country that was supposed to come on August 31.

Unfortunately, the Americans have hardly learnt anything from this chaos and the war theatres from Iraq. Their big and powerful military have drawn a blank in both these countries. More particularly, their leadership has not shown maturity while dealing with the Taliban. So there is a lot for Washington to learn from the mess in Afghanistan.

The August 26 fidayeen attacks carried out by the Islamic State Khorasan Province (ISKP) outside Kabul Airport reflect a deadly combination of the Taliban and the dreaded ISIS in the country. One must not forget that while signing the peace deal in Doha in 2020, the Taliban committed to the US that the Afghan soil will not be allowed to be used by any other terror group. But then what the world has just witnessed is simply the proliferation of those evil and radical networks under the very nose of the Taliban in Kabul. The ISKP after conducting the ghastly attack aired that its fidayeen singled out the “translators and collaborators with the American Army” in the fatal operation. It clearly shows how the anti-American vengeance runs deep down among these Islamists.

However, experts say that the ISKP is an adversary of the Taliban, and they stand for different teachings of strict Sunni beliefs in their ideology. For now, it seems the group is all out to oppose any alliance between the Taliban and the US forces in Afghanistan. Their record of unleashing carnage in the past hints that any active economic engagement by foreign powers in the country may invite more trouble both for Kabul and Beijing.

Can the world trust the Taliban? Of course not and should not. The road ahead for war-torn Afghanistan seems bleak for now. Its people are simply afraid of the past and current brutalities demonstrated by the Taliban. The locals know them as fierce war mongers who could do anything to grab power to establish a brutal Islamist rule.

Beijing’s opportunism in Afghanistan will not take it further. It is better not to do business with the Taliban at least for now unless the radicals show some signals to respect international law and order. But Beijing too does not care for international laws if those are in conflict with its interest. It is absolutely unlikely that Beijing will be able to make any fruitful security commitment to this war-ravaged nation.

However, the early bird Xi Administration will be able to further diplomatic communication with Kabul. For now, the Taliban leaders are desperately looking for global recognition and ties with as some vital nations like the US, China, etc. Therefore, it is not an extra-ordinary development that the new rulers in Afghanistan are looking out for global engagements. Simply put, unlike the past when they took over amid bloodbath in 1996, this time the Taliban insurgents have displayed a little restraint so far. The symbiotic expectations may have given Beijing a renewed hope for the economic exploitation of Afghanistan.