Extending sympathies to the new laureate

Extending sympathies to the new laureate 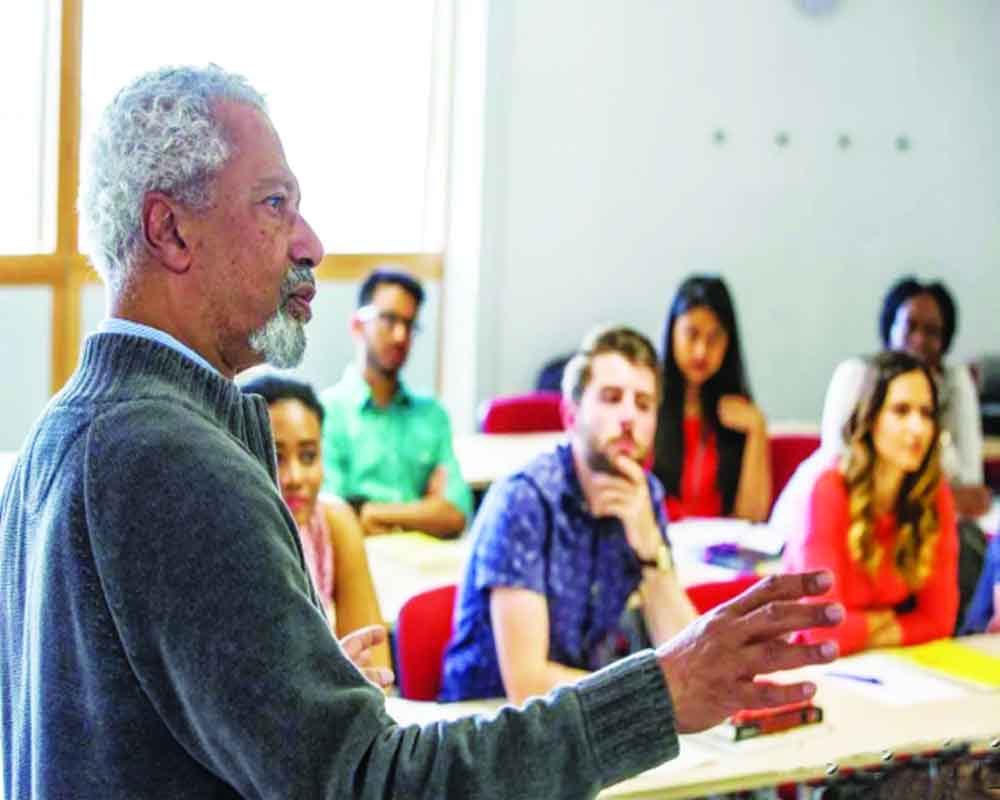 The French poet, Rene Proudhomme, who was the first Nobel Literature laureate in 1901, wrote in his famous ‘The Broken Vase’: Thus often does the hand we love, barely touching the heart, wound it. Then the heart cracks by itself and the flower of its love dies.

He’s speaking of a delicate and vulnerable aspect of us, and how easily it can dry up. Literature has always been about sensitivity and sensitization. It nourishes and rekindles the soul to fellow feeling. In the hurly-burly of our daily lives, and competitiveness and ambition, and the pursuit of profit, we are indifferent to the outcome for others, to their sentiments, or even their deprivation. There is an inherent conflict among us as we focus on our goals, and marginalise others whose interests don’t hold concern for us.

But there are witnesses compiling every injustice, recording every protest, and kindling people’s memories about glory and decline. A few of these observers serve not only to voice the experience of the victims, but give us insights on how humanity at large can live more sensitively. Their words stir us, find their way inside to lash at our conscience, and refocus our thinking on what it is to be essentially human.

Another Frenchman, especially famous for declining the Nobel prize for Literature, Jean Paul Sartre, declared: ‘Hell is other people’. There is a constant challenge to try to understand and empathise with others, further aggravated by differences in language, custom, and traditional beliefs. It is here that writers often build bridges by establishing commonalities and explaining away differences.

As the celebrated 1950 Literature laureate, Bertrand Russell, said at the Stockholm Concert Hall, “...sympathy is a genuine motive, some people at some times are made somewhat uncomfortable by the sufferings of some other people. It is sympathy that has produced the many humanitarian advances of the last hundred years.”

There are many literary prizes, so how is the Nobel Prize for Literature different, apart from perhaps, having the largest bounty? Because it is given out at the same time as awards in sciences — it accords the same prestige and acclaim to novelists, poets, and futurists as is enjoyed by biochemists, astrophysicists and developmental economists.

It also reflects the Nobel Foundation’s outlook of recognizing a broader contribution to modern human heritage. Rudyard Kipling was the youngest to win it at 42, but generally the prize recognises much older writers with eight or more books behind them. In terms of sheer number of copies sold, and cultural impact, Harper Lee could have been considered for her ‘To Kill A Mockingbird’, but that’s not how this prize is awarded - for one, that was her only novel, till she published a sequel several decades later with nothing in between.

The committee has also not looked towards any trailblazing authors in the sci-fi category despite it being the fastest evolving genre as technology itself has been racing at the speed of Moore’s Law. What the jury does seem to endeavour to do is to cast its net far and wide to ensure authors from many corners of the world are considered.

Possibly the most interesting reference to Zanzibar in the world of literature was in 1968, when Brunner wrote an imaginative sci-fi novel titled, “Stand on Zanzibar”. The book’s title refers to how large an island could hold the planet’s population if everyone had to get just enough standing space. Brunner’s speculation was that the Isle of Man (about 600 sq. km) wouldn’t suffice in the future and that by 2010, it would take a Zanzibar (about 1600 sq.km) to hold everyone. The theme of his Hugo award-winning novel was overcrowding, which is a common urban fear when there is an influx from faraway lands.

Which brings us to this year’s Literature laureate, Abdulrazzak Gurnah,  born in Zanzibar in 1948. Being on an important trade shipping route in the Indian Ocean, besides Bantus, there are people of Omani, Yemeni, southern Iranian, and even Indian descent. At the same time, it has been known as a hub of the slave trade where Arabs sold natives from Malawi and Mozambique to visiting ships. When the Zanzibar Revolution of 1964 overthrew the traditional oppressors, Gurnah fled as a teenager and started his life anew in the British Isles. So, he has experienced how complex and burdensome our identities can be.

In the early pages of his novel ‘Desertion’, he says about a character, Hassanali: “He could not disguise his anxiety and people who had known him all his life knew this about him, and made a joke out of it. They said it was something to do with his jinsi, his ancestry. Indian people are cowardly, they said, hopping about like nervous butterflies. His father was not timid. He had been a hothead in his youth, who sang and danced and raced the streets with anyone, and he was the Indian in his jinsi. It was God who made him like this, nothing to do with jinsi, and who was he to argue.”

Gurnah has been grappling with his African identity - as a Tanzanian (Zanzibar opted to merge with Tanzania after the Revolution) -- and how it relates to the history of migrations and colonialism in East Africa. He has taught in Nigeria, which also has ethnic as well as acute communal strife. And he’s known since his mid-teens what it is to adapt to life in a European culture.

As the last few years have caused waves of migrants out of West Asia and North Africa, and very recently, Afghanistan - the travails of the uprooted and the kinds of baggage they bring into their new places of residence will be in the spotlight.

Exiles who had to flee from their native lands are already distrustful of fate, and suffer to some extent from PTSD. Their attention is split between what’s still going on in the places they have departed from, and the challenges in their new environment. They haven’t the preparation that a graduate student has had before he or she lands up overseas on a good campus. Such exiles find themselves usually in less friendly locations than a university. Gurnah has been lucky in that regard.

The expatriate experience is very different depending on one’s age at arrival, line of work —whether a specialist in demand or unskilled, level of affluence, and aptitude for networking. Openness towards the way of life in the adopted country does help in integrating better, and gaining acceptance. An exile could have a sense of betrayal of their native culture when they move closer to a sense of belonging in their land of arrival.

In the future, we might think differently about the elements of identity, given the limitations that our instinctive ones about language, ethnicity, creed, and district have. We’ll then identify Literature laureates less by language of writing or nationality and instead emphasise their literary genre and individuality more. We’d then also be narrowing the ‘gulf between cultures and continents’ that the Nobel citation refers to in 2021.

(The writer is a Creative Director, advertising faculty, and an amateur epistemologist. The views expressed are personal.)