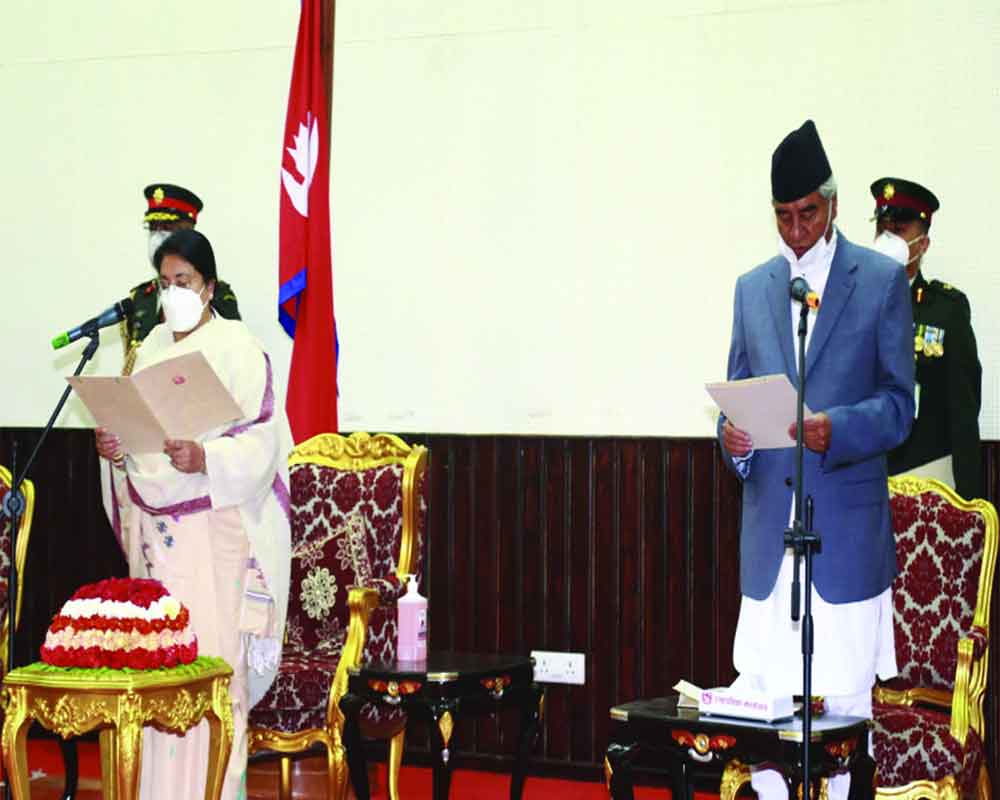 After a series of thunderbolts hit Nepalese politics, Nepali Congress president Sher Bahadur Deuba was appointed the 13th Prime Minister of the democracy on July 13. The Supreme Court had the previous day overturned the dissolution of the House of Representatives by former Prime Minister KP Sharma Oli on May 21 and ordered the appointment of Opposition leader Deuba within 24 hours under Article 76 (5) of the Constitution. Deuba managed to poll 165 votes in the 275-member House and secure clear majority. With Maoists and the Janata Samajbadi Party supporting the Government, a total of 22 members of the Nepal-Khanal faction of Oli’s UML party voted in favour of Deuba, including eight Oli loyalists. It was another eye-opener for the arrogant Oli, who had been misusing the Constitution and the Office of the President to cling to power.

Ensuring stability: During his one-and-a-half-year term, Deuba will have to ensure political stability and address the challenges of economy and employment amidst COVID-19. Although a no-confidence motion can be moved against the Deuba Government for two years under the Constitution, he will also need to put his own house in order as three major parties are supporting the Government. While a five-member Cabinet has been appointed and significant portfolios awaiting a Minister, including the Ministry of Foreign Affairs, Deuba will have a tough time keeping the Maoists calm, especially Prachanda, who continues to aim for the top post. Noteworthy, Maoists had aligned with the UML for the 2017 parliamentary and local body elections despite being in the Government with the Nepali Congress. Therefore, power-sharing with Prachanda will be an important element to look for in the months to come.

Rejuvenating ties with Delhi: Soon after Deuba won the vote of confidence on July 19, a congratulatory message was tweeted by Prime Minister Narendra Modi. Modi added: “I look forward to working with you to enhance our unique partnership in all sectors further, and strengthen our deep-rooted people-to-people ties.” The tweet was followed by a telephonic conversation. For many in India, it is a good start for India to engage with Nepal as bilateral ties have seen the lowest point under Oli. In the last one year, Oli had used anti-India manoeuvring to his political benefit, including unilaterally adding sovereign territories of India in the Kalapani region into the official political map of Nepal. Even though Oli was claiming that issues with India have been resolved, the border dispute remains a contention, whether Deuba wishes or not.

The Nepali Congress had supported the constitutional amendment moved by Oli to include Indian territories into Nepal’s political map. Therefore, India will have to make its diplomatic endeavours in Nepal carefully as on the border row, the Nepali Congress does not differ from what Oli had stood for. Also, with anti-India ultra-nationalistic elements working as catalyst in influencing the political mandate in Nepalese politics, Deuba might be seen taking that road. Meanwhile, with Oli gone, India has every reason to celebrate. However, India’s policy towards Nepal will need a more proactive instance than merely noting the events there. The existing trade deficit has often worked against India’s goodwill, and a competitive investment on a par or more than China will be needed.

Interestingly, Modi has promised to provide COVID-19 vaccines to Nepal during the telephonic conversation with Deuba. India had halted the vaccine supplies to Nepal after the second wave hit India in April. Thus, it should be seen as a welcome shift in India’s policy towards Nepal during such challenging times.

Overcoming coalition compulsions: Further, Deuba has a better chance to shed Chinese heavy-handedness into Nepal’s political and foreign affairs and mend ties with India. Against the popular image of Oli befriending China to serve Beijing’s interests in matters related to Tibet and India, Deuba does not come with the baggage of communist ideology. Therefore, he can work with India on the path to cooperation and development in Nepal. Meanwhile, his alliance partner Prachanda is known for his China leaning.

It was a similar coalition in 2017 with Nepali Congress when he persuaded Deuba to sign the Belt and Road Initiative, much to India’s unhappiness. On July 6, Prachanda was seen making overtures to Xi Jinping and the Communist Party of China during the Communist Party of China and World Political Parties Summit to mark the 100 years of its establishment. Prachanda had given a clean chit to China, claiming it as the most generous nation in “contributing to global prosperity and peace as well” and an advocate of “rule-based international order, peaceful resolution of conflicts, and global equity and justice are highly commended by developing countries, including Nepal”.