Good to focus on skill

Good to focus on skill 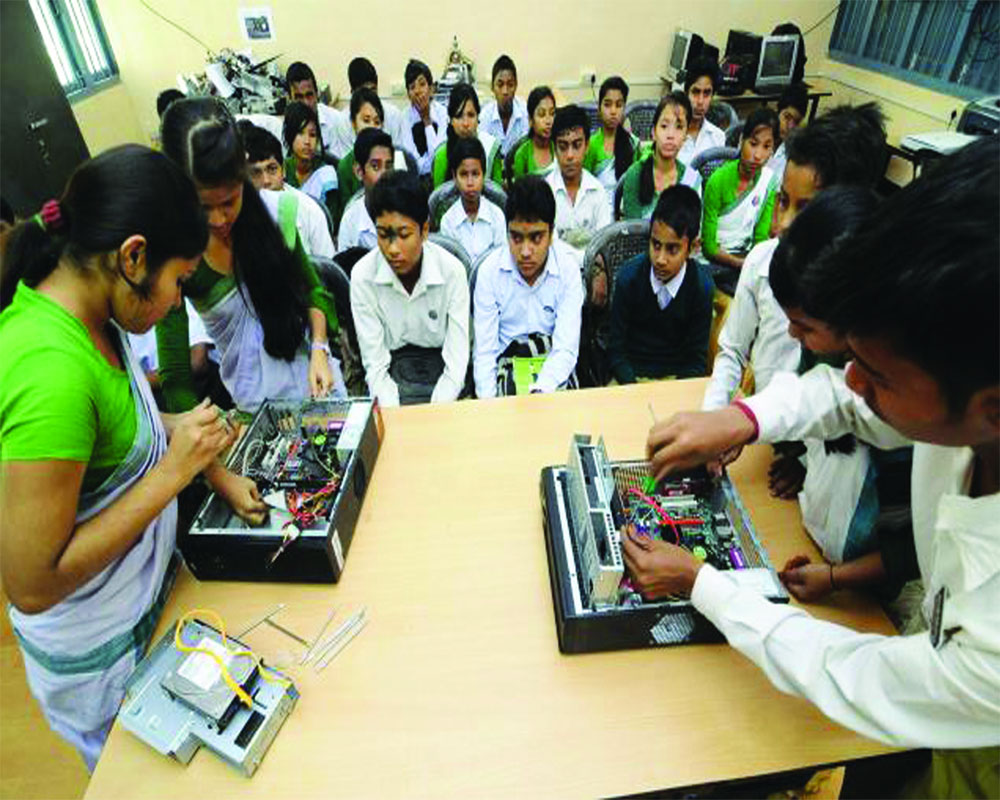 The NEP is more in tune with national priorities and contemporary realities. It pays attention to areas that had been neglected for long

After decades of intransigence, the Union Government and policymakers in the education sector have come up with a National Education Policy (NEP) which is more in tune with national priorities and contemporary realities. This is so because the new policy pays special attention to three very important areas that have been neglected for long — holistic and multidisciplinary education, vocational education and impartation of skills and equalisation of opportunity for digital education.

The Centre has drafted education policies in the past. However, like many things which were thought of earlier, these plans have fallen by the wayside for the lack of foresight, funds and commitment. Eventually they just ended up as a string of shibboleths — high sounding but vacuous prose — just meant for the printer contracted by the Government to make a killing!

But, this time it is different because it seeks to diagnose and confront the real problems that we  face in the field of education,  be it early childhood care and learning, curriculum and pedagogy in schools, language education, holistic and integrated learning, vocational education and  promotion of Indian languages, art and culture. It is difficult in a single column to cover all aspects of this policy, so better limit the attention to just a few aspects like holistic, multidisciplinary and vocational education.

The NEP talks about the multidisciplinary approach of universities like Takshashila and Nalanda where good education meant good knowledge of 64 “kalaas” or arts which included singing, painting, chemistry, mathematics, medicine, engineering and vocational subjects such as carpentry, cloth-making and soft skills such as communication and debating. In other words, it was holistic knowledge — complete, comprehensive education that gave an individual more than rudimentary understanding of various disciplines of learning and equipped him/her for life’s challenges. The NEP says: “The very idea that all branches of creative human endeavour, including mathematics, science, vocational subjects, professional subjects and soft skills should be considered arts has distinctly Indian origins.”  Therefore, this ancient understanding of education “must be brought back to Indian education, as it is exactly the kind of education that will be required for the 21st century.”

This statement of intent in the NEP, if implemented with utmost commitment, will revolutionise higher education in the country, which fell into the rut of clearly separating the arts and the sciences for decades as if these disciplines were enemies of one another. This policy was pursued with such ferocity that even students who acquired Masters’ and Ph.D degrees felt a sense of incompleteness to their education and understanding of the world, and consequently lost out to their peers in the western world who were blessed with holistic education.

It is indeed sad that our politicians, bureaucrats and educationists persisted with such a policy that segmented knowledge, put students into a strait jacket and virtually prohibited them from venturing into areas outside their syllabus.

All those responsible for this short-sighted policy must be identified and asked why they subjected millions of Indian students to such mindless compartmentalisation.

The second issue is vocational training. Since Independence, Indians were told that blue-collar jobs like running a lathe machine or being a fitter or turner in a factory; operating a bulldozer or heavy earth-moving equipment; carpentry, plumbing, basic electrical work and so on were meant for the less educated or those who passed out of Industrial Training Institutes (ITIs). Good middle class boys would go to college, acquire their degrees (with very little skills) and become “boxwallahs” or private sector executives or teachers. The less fortunate among them would become Government clerks, whereas the smarter ones would take civil service exams and become babus. Further, “safe” Government jobs became the ultimate dream for the youth. The system did not ignite the entrepreneurial instincts of students or challenge them to explore new avenues. Thus, persons with passable language skills and a smattering of English were the smart guys with good incomes, whereas the ones with real skills — the lathe operators, the electricians and so on, who ran our industries and the manufacturing sector, who kept the country’s Gross Domestic Product (GDP) rising — belonged to a lower grade, the working class.

This anomaly persisted for decades because the Indian middle class declared that a degree certificate was a must to enter its precincts and to be in its marriage market.  This could have been easily set right by awarding degrees after three-year training at an ITI to those passing out. Finally, the new NEP recognises this lacuna and seeks to remedy it.

It is indeed a shame that this convoluted middle class habit of honouring skill-less education was allowed to persist for over  70 years after Independence.

As a result “vocational education is perceived to be inferior to mainstream education and is meant largely for students who are unable to cope with the latter”, says the NEP. It also seeks to overcome the social status hierarchy associated with vocational education.

So, now, the plan is that 50 per cent of students through school and higher education should have vocational education by 2025. It will also be possible for students with vocational skills to get Bachelor’s degrees. Alternately, students in undergraduate courses can join four-year multidisciplinary programmes and walk out with worthwhile skills apart from their degrees. In short, the apartheid created by the education system separating the skilled and qualified certificate holders from the unskilled but “packaged degreewallahs” will come to an end. The day we see the skilled workers getting their due, India will take a big leap forward.

We must now keep the pressure on the Government and policymakers to see that the NEP is implemented with utmost honesty and diligence.

(The writer is an author specialising in democracy studies. The views expressed are personal).