Lakhimpur Kheri— Was it avoidable?

Lakhimpur Kheri— Was it avoidable? 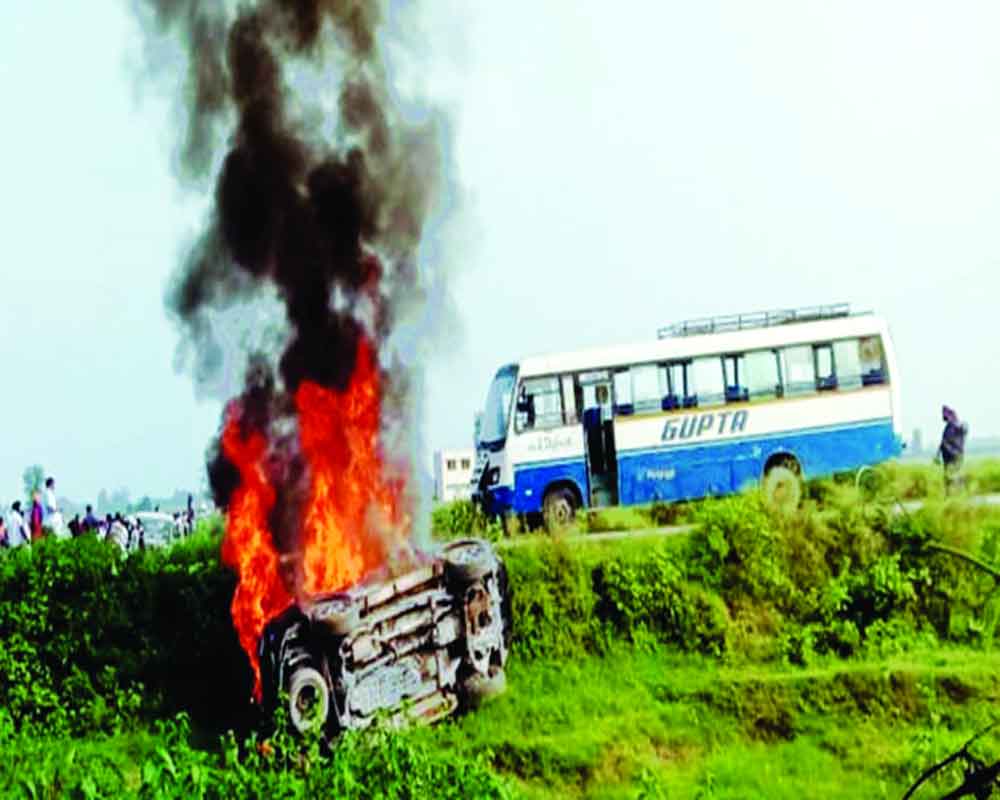 A protest must have a specific purpose and an endpoint resolution of conflict. It cannot be an open-ended exercise free of any stipulations

The Lakhimpur Kheri incident in which 8 people lost their lives during the farmer’ protest was a colossal tragedy that was avoidable. Paradoxically, it was also a calamity waiting to happen. A political cauldron of noxious ingredients had been brewing for some time. Dogged stubbornness and thoughtless provocative utterances had heightened the tension; the bottled-up frustration of a jaded and over-stretched protest was waiting to explode. A frontal collision was inevitable.

The spark came on October 3 when a cavalcade of Union Home Minister of State Ajay Mishra allegedly ploughed through a group of protesting farmers killing four of them. Angered by the killing it is alleged that the protestors went on a rampage. dragged the BJP members out of cars and mercilessly beat 4 of them to death.

Details of this gruesome incident are murky. As per an FIR lodged by Jagjit Singh, a farm protestor, “We were holding a peaceful protest at Maharaja Agrasen Inter College ground….when the Union MoS for Home Ajay Mishra’s son Ashish came in an SUV along with two other four-wheel vehicles, with arms and weapons, at a high speed. Ashish Mishra, while sitting on the left side of the Mahindra Thar car, fired shots and crushed people while moving forward.”

This version is contested by Ajay Mishra who claims, “Stones came flying at the vehicle when it was on the way to receive the chief guest, the driver lost balance...and some could have died in that accident. My driver and three BJP workers who were in the vehicle were chased and attacked with rocks, sticks and swords…they were lynched.”

He had earlier denied that his son was at the scene of the incident. Which of these two conflicting versions is true is difficult to ascertain at this stage. However, a series of sequential videos that surfaced online suggest that pelting of stones was the initial trigger for this mayhem.

Nevertheless, a proper enquiry is warranted so that the guilty may be tried and punished as per the law. Accordingly, CM Yogi Adityanath has announced a judicial inquiry headed by a retired judge to look into the incident.

In parallel with a call for an enquiry, however, a dangerous and mischievous narrative is being played out in certain sections of the media that is disturbing and concerning; a partisan description that tends to favor one side over the other and places a premium on one set of lives in comparison to the other - all with an intent to put the Government in the dock for an offence, the culpability of which is yet to be determined.

A well known newspaper avers: The BJP Government has a playbook…vis a vis popular protest...Let the issue fester, and try to tire out the protesters, while actively seeking to delegitimise them, by labelling them “anti-national” and calling them other names. Then, if matters escalate, bring out the barricades and the force. Treat it like a law-and-order issue in a police state, and don’t let leaders of the Opposition come to the site of the protest or the violence, to do what is surely their job as politicians and people’s representatives.

First to invoke presumptuous theories to pre-determine guilt in a sensitive case like this devious. Second, by using the phrase,’ bring out the barricades and the force’ to describe the BJP’s modus operandi, the editorial has sealed the BJP’s guilt without a trial. Such statements uttered without evidence are reckless and misleading.

Additionally, the Government cannot be faulted for keeping opposition leaders away. The intent was to calm the situation and maintain peace. In fact, it was done at the behest of farm leader Rakesh Tikait who feared that the politicians were there to exploit the situation as indicated by some news reports.

Coming to the million-dollar question: Was this incident avoidable? Dissent and protest are an integral part of democracy. However, one must also realise that protest is only a means to an end and not an end in itself. A protest to be valid must have a specific purpose and an endpoint resolution of conflict. It cannot be an open-ended exercise free of any stipulations. A prolonged directionless protest becomes a fertile ground for frustration, violence and even killings as illustrated by this incident; anti-social elements are also likely to take advantage of the situation.

Justice Khanwilkar of the Supreme Court on October 1, when responding to a farmer’s outfit seeking permission to hold a protest in Jantar Mantar rightly posed this question to the farmers “You are saying you want to protest, protest what? The Act has been stayed by the Court. The Centre has said it will not be implemented.” Referring to the deaths in Lakhimpur, the honorable judge had also stressed the lack of accountability: “When such events happen, no one takes responsibility!”

And this is not the first time that violence has overtaken the farmer’s protest - January 26 is still fresh in our minds. The farmers’ protest has outlived its utility. Prolongation inadvertently provided a fertile milieu for this ugly altercation. With a little good sense, it could have been avoided. It is time to call off the protest to prevent more Lakhimpurs. Concomitantly, all those guilty for each of the 8 deaths, whoever they may be, must be arrested and prosecuted to the fullest extent of the law.

(The writer is an academic and political commentator. The views expressed are personal.)