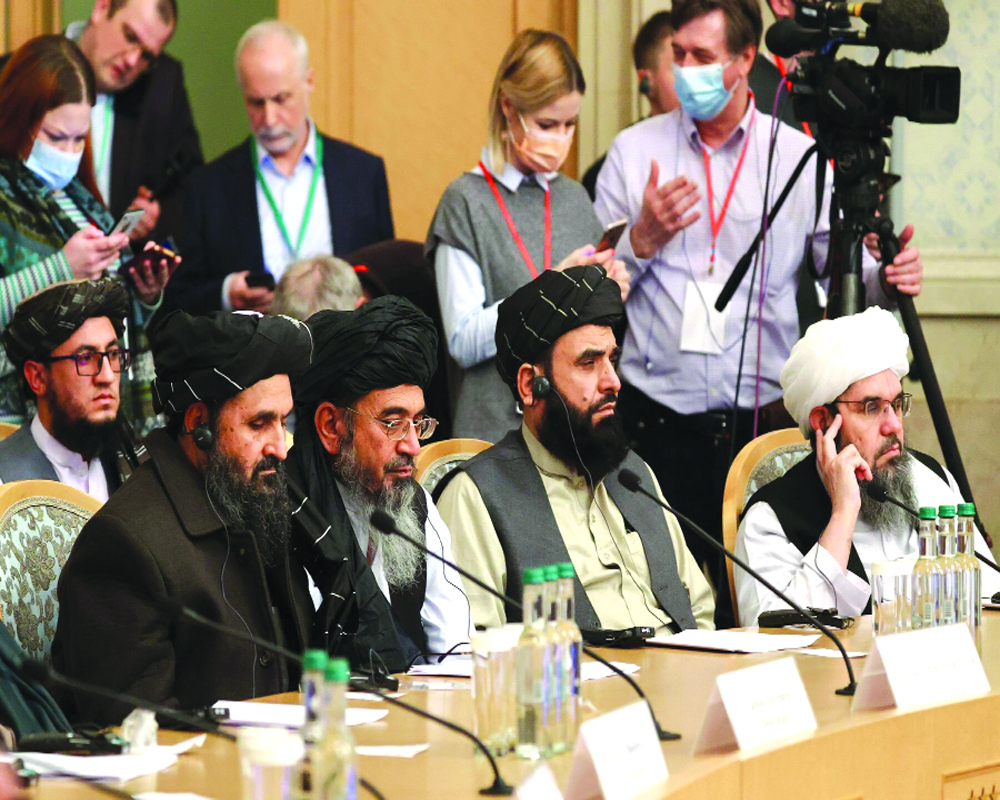 Given the reach and lethality of ISIS, the Taliban may not withstand pressure from the international terror group in the long run unless Al-Qaeda is roped in for countermeasure

The Taliban's outreach to the international community is driven mainly by the existential crisis the outfit is facing back home due to both the presence and lethality of the Islamic State Khorasan Province (ISKP) that holds the potential to challenge and overthrow the current regime in Kabul essentially supplanted by Pakistan's covert agency Inter-Services Intelligence (ISI).

The Taliban is seeking to first get the Interim Cabinet members' designated terrorist tag removed. At least 14 members of the Interim Cabinet are designated terrorists of the UN as well as the US sanctions lists. With such a designation, Taliban cabinet representatives cannot move around freely amid apprehension of fatal drone strikes against them. The Taliban is also vying for international recognition from the global community or at least as many countries as possible in the region and beyond.

Once recognized by the international community, the Taliban will be able to put across its viewpoints at various forums of the UN as also seeking funding assistance for its messed-up economy from the IMF and WB.

The Taliban will then also be able to negotiate military assistance from the UN member-states in the name of countering terrorism on Afghan soil by anti-Taliban groups like ISKP.

The Taliban is habituated to survive on illicit financing through extortion and garnering proceeds from sale of narcotics. The recognition of its regime will help Taliban in transforming the black economy into white money channels.

These factors have compelled the Taliban to pitch in for international recognition and portray itself as Taliban 2.0, radically dissimilar from the outfit's regime that ruled the roost in Afghanistan till 2001.

Notwithstanding the Taliban propaganda ruling out any threat from ISIS, the fact is that ISKP is a profound and dangerous competitor to Al Qaeda to whom the Taliban owes allegiance.

The Taliban is essentially a local terror group with influence being limited to Afghanistan and completely unlike the ISIS that has a cadre and funding base from multiple ethnicities and geographies.

In a worrying fact, the ISIS has some significant presence on the ground and has been able to inflict four major terror attacks on the Afghan soil post-takeover of Kabul by Taliban on August 15, including the deadly Kabul airport hit amid the then ongoing US troops' withdrawal and fatal attacks on Shia mosques in Kunduz and Kandahar.

With active connivance and assistance from the ISI, the Taliban has been able to deceive the international community in seizing power in Afghanistan in a swift advance and without any resistance either from the erstwhile Afghan National Defence Force or any militia.

But the Taliban cannot deal with the situation at the international level on its own after it has grabbed power in Kabul.

By engaging in multilateral meets like the Moscow format, the Taliban is buying time to gain international recognition and keep the anti-Taliban forces at a relative bay by participating in such overtures.

Taliban has been mainly trained in perpetrating insurgency but tackling insurgency is an altogether different ball game. The ISI masterminds have deliberately kept the outfit away from gaining such craft.

The Taliban apprehends that if ISIS continues with its bombing spree and spreads traction among the Afghan society and enlarges the area of influence, all the other anti-Taliban forces will rally under it to overthrow the current regime in Kabul.

Given the reach and lethality of ISIS, the Taliban may not withstand the pressure from the international terror group in the long run unless Al Qaeda is roped in for the countermeasure.

In this backdrop, the Taliban is left with two broad choices for survival---one to get recognition for its regime in Kabul and subsequently get military assistance to counter ISIS or ally with Al Qaeda which can pool in its fighters from various countries to check ISIS or its Afghan affiliate ISKP.

In its bid to seek international recognition, the Taliban is also portraying that it does not want Al Qaeda fighters and this is the reason why it is seeking sanctity from the global comity of nations for its regime in Kabul.

For its international recognition project, the Taliban has fielded Anas Haqqani, the Home Minister of the interim government and Amir Khan Muttaqi, the Foreign Minister, for addressing the internal and external dimensions of the Afghan challenge.

While Haqqani is seeking to update the international community on the need to check dissidence in the Afghan society as well in the pockets on the Afghanistan-Pakistan region dominated by a large population of the Pakhtun ethnicity who could come in handy for taking refuge in the event of the international community or a group of countries deciding to decimate the Taliban to protect their own sovereign interests.

Haqqani is also tasked with the onus to keep Baloch insurgents in check so as to deny foreign agencies like the Mossad and Research and Analysis Wing the opportunity to carry out anti-terror action in Pakistan from Afghan soil.

Muttaqui is tasked to ensure external security by checking Iran from attacking Afghanistan through the ISIS or bombings by the Russians who see the turmoil in the war-ravaged country as a threat to their respective sovereign interests.

The Taliban leadership is also clear that it has reached the stage of forming an interim government with ISI help but is also aware of the need to balance between the ISI and the international community.

Taliban is further aware that despite being helped by the ISI to control Kabul, it cannot be seen as a puppet of Pakistan beyond a point as international recognition eludes the regime.

Despite its overtures and pledge to form an inclusive government in line with the desire of the international community, Taliban has so far been getting help exclusively from China because of its strategic location and Pakistan's back- channel support in roping in Beijing to rescue the Taliban from the plethora of mess it is facing.

Now, the Taliban is aiming to have a direct communication with China to maximize the cooperation it is getting from Beijing and simultaneously sideline Pakistan to shed its image as an ISI puppet.

Fully aware of the Pakistani machinations in both Kabul and within Taliban, Russia did not invite the Pakistani pointsman Gulbuddin Hekmatyar heading the Hizb-e-Islami faction of Taliban for the Moscow format dialogue underway in the Russian capital. Hekmatyar has issued a statement that Moscow talks would fail as all sections of Afghan society have not been represented in the talks.

While 10 countries including India and China participated in the Moscow talks, none of the countries, not even China, is willing to grant recognition to the Taliban.

The Taliban was initially buoyant over the vast number of American equipment left behind by the allied forces but now it is realizing that these machines could threaten its existence if ISIS gets hold of them. The Taliban cannot use American weapons due to lack of training.

The complexity of the Afghan problem makes the situation in Afghanistan pregnant with all possibilities including bombing by the Russians or an onset of a Shia insurgency.

(The writer is a Special Correspondent, The Pioneer. The views expressed are personal.)