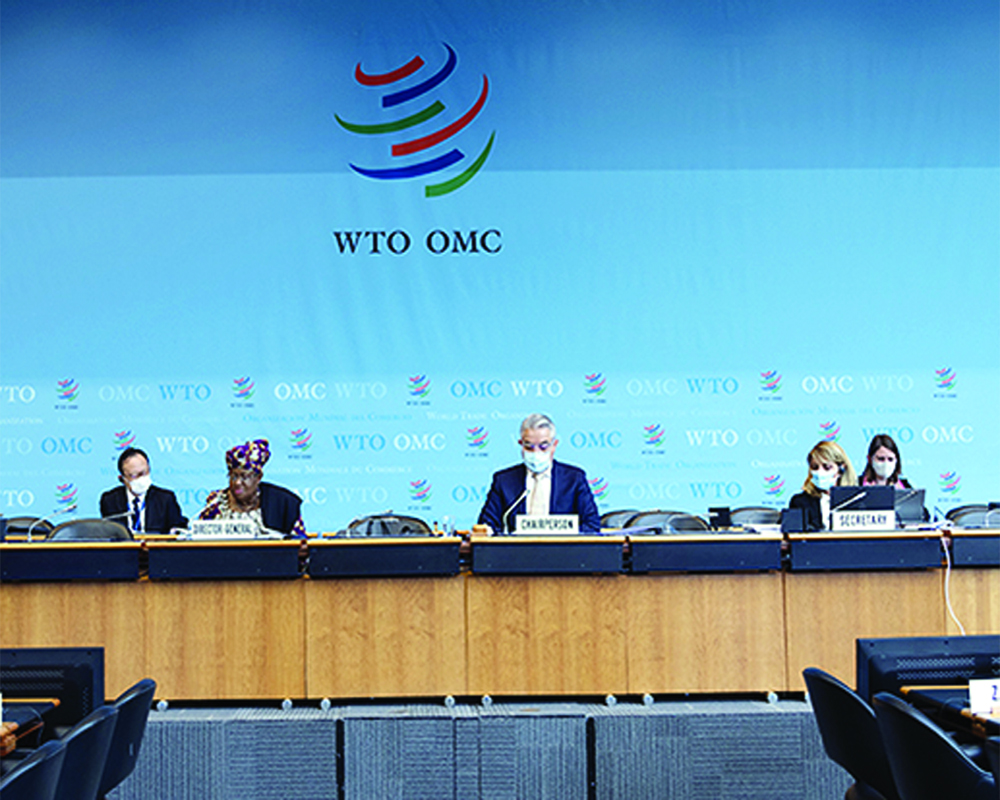 Covid-19 vaccines are developed with the help of public funds, therefore, the argument in favour of retaining monopoly rights with the MNCs is not convincing

The Agreement on Trade-Related Aspects of Intellectual Property Rights (TRIPs) came into effect in January, 1995. It protects four intellectual property rights - patents, copyrights, industrial designs, and trade secrets. At the same time TRIPs contains provisions to relax or suspend these IP rights during health emergencies. Covid-19 pandemic has shaken the world. No country has been spared from its devastation. Vaccines are considered to be a lasting solution to controlling it. But availability of these vaccines in the developing countries has become a huge issue- multinational companies have the monopoly over these.

For the first time in the history of WTO, as many as 62 countries led by India and South Africa have approached this august body for a temporary waiver of IP rights in vaccines and other essential medicines and therapeutics. This proposal has emanated from the belief that developed countries are stocking up the vaccines and developing countries are being denied access to these.

Developments of the last few months are pointers to this: developed countries have cornered 70 per cent of the vaccine production while over 100 low-income countries have had not a single dose of vaccine. Some countries have termed it as 'vaccine apartheid'. Many of the countries in Africa dread a repeat of the 1990s when HIV/AIDs ravaged the continent, and there was no access to the newly launched triple cocktail of drugs to treat this illness as it cost over US$12,000 per person per year. Big Pharma had the monopoly with patent rights over it and they put up a strong resistance to launch of cheaper generics.

Ultimately under huge pressure from governments, civil society and other groups, generic production was allowed to companies like Cipla. The result was a drastic drop in prices to US$1 per person per day (in 2001). The Doha Declaration on the TRIPs Agreement and Public Health in 2001 (by WTO Ministerial Conference) reiterated the flexibilities in TRIPs for public health. It recognized the rights of member states to make use of these at times of health emergencies. Despite all this the developed countries and Big Pharma have always resisted use of TRIPs flexibilities.

As in the past, most developed countries have opposed the proposal to suspend the IP rights in vaccines and other medicines, even if temporarily. They give the oft-repeated argument that it will harm innovation and discourage private investment into research and development. Further, since the current crisis is witnessing a mutating virus, it needs constant tracking and innovation, hence more investments. It is also being said that most developing countries do not have the capacity and competence to handle the production of complex vaccines. Instead, these countries have offered to supply vaccines in charity to the low-income countries through the COVAX facility created by WHO and three other international agencies. This charity-based model has not been found sustainable during the past epidemics.

The developing countries are highly sceptical of the motives of the developed countries and want to tap the flexibilities offered by the TRIPs agreement - collectively this time rather than individually. What can be a more extraordinary public health emergency than the present one?

Last month efforts of the developing countries got a shot in the arm when the USA reversed its earlier stand and announced support to their proposal in WTO. Still, the road to the final destination is paved with uncertainties and would need all the acumen and perseverance at the level of the proposers.

Two other significant developments took place last week. First, to break the deadlock, the 62 co-sponsor countries have on 21 May amended the proposal to limit the waiver period to three years with a provision to review the position at the end of it. It is hoped that the revised submission will help reconcile the two opposing positions.

Second, the date for the long-pending meeting (12th) of the Ministerial Conference, the highest decision-making body in WTO, has been announced. It is scheduled to be held from November 30 to December 3, 2021. The delay is due to the Covid-19 pandemic but this may also delay a final decision on the proposal of the developing countries. This decision will be taken based on the consensus of all WTO members. If consensus is not reached, the decision will be taken by voting with a majority of three-fourth members voting in favour.

Covid-19 vaccines have been developed in a short period, primarily with the help of public funds from the USA, EU and other sources. Therefore, the argument in favour of retaining monopoly rights with multinationals is not wholly convincing. There is so much logic and urgency for suspending IP rights and sharing technology with a larger number of companies and this demand is getting louder.

Among other positive moves is the EU initiative worth $1.2 billion on manufacturing and access to vaccines, medicines and health technologies to Africa. Big Pharma comprising of BioNTech, Pfizer, Johnson & Johnson and Moderna, have together pledged 1.3 billion doses for low-income countries at no profit and to middle-income countries at lower prices by the end of the year -- mainly through the COVAX facility. Italy has pledged Euros 300 million (1.8 billion doses). Gavi, the Vaccine Alliance, which oversees COVAX, has been able to pool over $7 billion of the targeted $8.3 billion for 2020-21 for COVAX for the lower-income countries.

Despite all the above developments the developed countries remain divided on the issue of waiver of IP rights. Further discussions in TRIPs Council are held up.  Since access to vaccines in all countries is the key to control the pandemic, it is essential that an early decision is arrived at the pending proposal. There is need to multiply and diversify the production capacities and the production centres without further loss of time. It is heartening to see India and South Africa emerge as the voice of over 100 low-income and lower middle-income countries of the world who are the most vulnerable needing greater access to vaccines. Hopefully, with pressure building up on the developed countries, there should be a breakthrough in WTO and collective efforts of all countries will bear fruit. We have to win the fight against Covid-19, so that everyone feels safe and protected.

The author is a retired IAS officer from Rajasthan. The views expressed are personal.