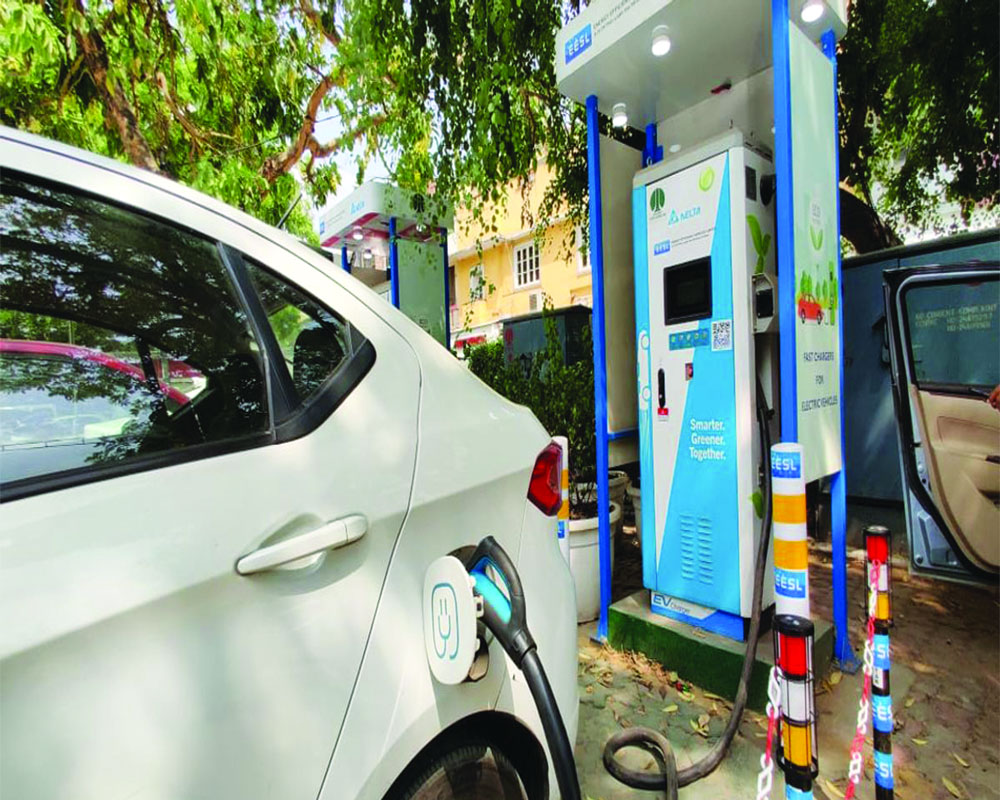 Higher fuel prices are convincing more people to think electric for next vehicle even though, ironically, the Government is subsidising eventual revenue loss

During a recent round of increase in petrol and diesel prices, many crocodile tears were shed by the politicians of all hues. The Centre and State Governments have raised incredible sums of money from excise duties, surcharges and cess on petrol and diesel. But the recent price surges saw the reality of Rs 100 a litre petrol in some States, and with Black Swan events continuing to take place, such as the Suez Canal blockage, and oil producers’ cartel OPEC talking of production cuts, crude oil prices will not dramatically decline anytime soon. With the Reserve Bank of India keeping the rupee’s exchange rate against the dollar steady, prices at the pump might not come down soon. With an ambitious infrastructure building programme and higher agricultural expenditure on the cards, the Centre will need funds and the amount it takes from every litre of petrol or diesel will only go up. Petrol at Rs 100 a litre will be a reality nationwide sooner rather than later, and at the current rate of increase, Rs 120 a litre for ordinary petrol will be a reality by the next general elections.

Why talk about fuel prices in a column about vehicle electrification? Because fuel prices are both the greatest opportunity as well as the biggest challenge for this. The opportunity is simple, because whether we like it or not, a cogent argument can be made that higher taxes on petrol and diesel are like a carbon consumption tax. If you do not want to pay this tax, go electric. As an automotive reviewer for almost two decades, this columnist has driven several electric vehicles, even living with them for a few weeks. This gave me the opportunity to evaluate their running costs in a real-world situation and on something like the Hyundai Kona and Tata Nexon EV, this came to a rupee a kilometre even at the peak unit rate of power in Delhi. A similar vehicle with a petrol or diesel engine would have running fuel costs between Rs 6-10 per km at the current rates.

There are many arguments against electric vehicles. The more fallacious ones surround the fact that polluting thermal energy constitutes a majority of India’s power mix. But again, like fuel prices at the pump, that is being a victim of the present. India is aggressively changing its energy mix with more solar and wind energy sources coming onstream. But the one that cannot be escaped is the fact that electric vehicles are much more expensive than internal combustion engine vehicles and leave India vulnerable to a whole new cluster of nations that dominate natural resources in this arena, much like India was beholden to oil-producing Arab nations for years. And in electric vehicles, India has been very slow compared to China; not only has China hoovered up Lithium and other vital resources but also by establishing a manufacturing ecosystem around electric vehicles and batteries, poses an existential threat to Indian automotive manufacturing.

The automotive industry in India directly employs close to 15 million people, indirectly employing five-six times as many in varied other sectors, from components to logistics to sales and even the vibrant automotive media. There is a realisation that the industry has to pivot to cleaner alternatives as air pollution and fuel prices are a concern. However, it is not going to be an easy task, although increasing consumer preference for electric vehicles will be a major driver for change.

But to truly drive electrification, the products have to be desirable, and affordable. The perfect electric motorcycle considered by a large industry player has what that company calls the ‘70 Trifecta’, a range of 70 km, a top speed of 70 km per hour and costs Rs 70,000. Fulfilling the first two criteria is relatively easy to fit a bigger and better battery, the third is the challenge in India. And if prices of important raw materials go up, the price of Lithium Carbonate has doubled since bottoming out in late 2020, it will only drive prices higher. And similar issues exist in passenger vehicles; even if lower-range urban commuter hatchbacks are a model chosen for India, would a consumer be willing to pay 50 per cent more, say Rs 9 lakh vis-a-vis Rs 6 lakh, even if they knew that over a lifetime of eight years and 1,00,000 km of driving they would save Rs 6-7 lakh in running costs if benchmarked at today’s petrol prices? May be. But would they pay Rs 12 lakh for such a car even if net-net they will end up saving money?

And then there is the biggest problem for the Government. If mass electric vehicle adoption takes place in the next five-six years, have the Governments thought about just how they will make up for the lakhs of crores of lost petroleum taxation? Here is the bizarre irony of the situation: The Central, State and city Governments are incentivising people to buy vehicles that will eventually cost them their lunch. After all, even the most dedicated petrolhead will not be able to argue with the fuel costs involved.

While a bureaucrat will come up with ideas to cover the revenue shortfall, but what will that entail? The reduction of electricity subsidies for one, and maybe even increased taxes on electricity including a cut from fast-charging stations? Of course, even if there is rapid adoption of electric vehicles in India, it will not replace internal combustion engines totally. Far from it, recently the Delhi Government and Tata Motors got into a disagreement regarding the range of the Tata Nexon EV, proving that not only is range anxiety real, but it can impact policy issues as well.

This is the first part of a series on electric vehicle adoption and policy issues around the same in India.