The empowering sound of music

The empowering sound of music 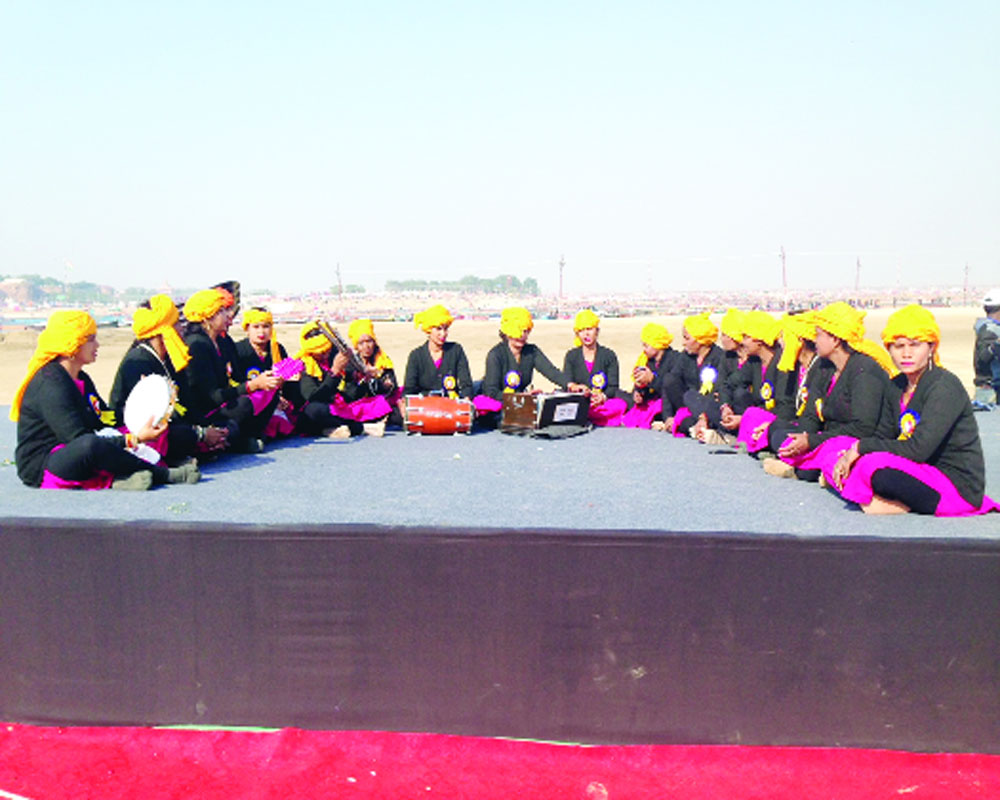 Supported and trained by the State Mahila Samakhya, an all-women band Arohini has travelled through UP, singing songs of women empowerment and creating awareness

The eldest is 56-years-old and the youngest is 21. Despite this age difference, the members of the all-women rural band in India ‘Arohini’ are united in a common bond to push for women’s empowerment. All band members are marginalised village women who were almost never allowed to leave the house. But ever since ‘Arohini’ was born, they became agents of change in Uttar Pradesh (UP).

“I was married young and not allowed to study. I got the opportunity to express my pain and life of oppression through this band. Now I write and sing songs to raise awareness against chid marriage so that other girls can be stopped from meeting this fate,” says 56-year-old Pushplata Devi.

In fact, a majority of the 20-member band were child brides. Both their natal and marital families did not consider education important and denied them opportunities to pursue studies. This is not unusual for a State where every one in five girls has been married before the legal age of 18. Neither is it surprising that UP tops the list of the most out-of-school girls in the country and has scored the lowest on the gender equality indicators among all States, according to the 2018, Sustainable Development Index report by the Niti Aayog, the Government’s policy institution.

However, this is what the band was hoping to change. Supported and trained by the State Mahila Samakhya (MS), an organisation working for rural women’s development that is run by the Government, the band travelled to different districts across UP, singing songs of women empowerment. Through their songs, the band tried to debunk myths related to menstrual hygiene, early marriage, domestic violence and the critical need for the girl child’s education. But since December 2020, the band and over 600 MS women employees have been out of work after the Government issued a formal notice of closure of the MS programme. This came as a double whammy, with the women already reeling under a financial crisis due to the non-payment of salaries since 2018. Their situation was further exacerbated by the Covid-19 pandemic in March 2020 and the subsequent lockdown in the country.

Although the State Government has often stated its commitment towards empowerment of women and promised requisite funding for related programmes, it has not deemed it necessary to address the resource crunch faced by the MS. The Budget allocation for the programme running in 19 districts has been steadily dipping. In 2018-19, the State Government approved Rs 10 crore for it while presenting the annual Budget but released only half the amount. As a result, the remaining sum of Rs 5 crore lapsed as it couldn’t get used.

Any hope that this lapse would be rectified in the 2019-2020 State Budget was dashed when only Rs 2 crore was allocated. With such a meagre budget, it was only a matter of time before the programme, running in the State for the last 30 years, collapsed.

The closure of MS means the end of the dreams of over 2,00,000 rural women who got an opportunity to exercise their agency and realise their potential. It also rolls back years of untiring work to raise awareness of women’s rights and their empowerment through literacy programmes. For this to happen on a sustained basis for three decades in a State steeped in patriarchy, is admirable.

Expectedly, this wasn’t easy in the beginning because the first hurdle that the women had to overcome was opposition from their own families. So MS first began by bolstering the women’s self-confidence before embarking on their education programme. It was only after they learnt about their rights that the women gathered the courage to step out of their houses and form collectives. “When I first started going for the MS meetings, my family forcibly stopped me from going out of the house. They said a woman’s place was in the house and not outside. But I was determined. I was also beaten up, but even then I didn’t give up and became a member of the MS women’s group. Thanks to them, I also started to study again. Then I became a member of the band,” recalled Pushplata Devi.

It was when feisty women like Pushplata began articulating their thoughts and hopes through songs at the MS meetings that the idea of forming a band that could use their stories to inspire others germinated. Smriti Singh, then State Director, felt that with a membership of over 1,20,000 rural women in 19 districts, the band was the perfect platform to showcase their talent. She wanted the band to give members the chance to fulfil their dreams and also motivate other women to come forward.

In order to give representation to all districts where the MS works, all women groups were asked to showcase their talent. Out of these, 20 women were chosen and then trained. To give them an identity, the band was named ‘Arohini’ (meaning moving forward). It was decided that band members would wear identical pink kurtas, black salwars, and yellow turbans during their performances.

This uniform has become a prized possession of 32-year-old band member Seema Kumari. A resident of Araria district, Kumari had to drop out of school and get married at the age of 15. “Since then, my only identity has been that of a wife, daughter-in-law and mother. When I wear this uniform and sing, it gives me an identity of my own. Now I have a voice in the decisions in my house,” she reveals.

For Maya Devi, being a part of the band gave her the opportunity to learn new things and use the learning to inform others through songs. She now knows that under the Prohibition of Child Marriage Act (PCMA), 2006, the marriage of a woman below 18 years of age is illegal and is punishable with imprisonment up to two years. She also knows that girls aged 15-19 are twice as likely to die in childbirth as compared to women in their 20s.

“When we give this information through our songs, it is better understood by the communities because the message is given in an entertaining way. We know we are making an impact when they share their problems with us and seek our help,” she said. The evidence that MS provided the impetus for women to challenge rigid social norms is reflected in their stories, their increased participation and greater voice in household decisions. Greater awareness and knowledge has improved their mobility and boosted their visibility in public spaces. The performance  at various district and State public events is just one example.

When the women and child rights forum project started under the direction of the State Government in 2017 to eliminate child marriage, they took the lead. They took the help of their collectives to prevent 437 child marriages over the next two years.

Work by all such women and child rights forums set up in each of the 19 districts has come to a halt now. Just as it has in the 150 MS Nari Adalats (women’s courts). Thanks to these courts, women had access to affordable and speedy justice that addressed complaints of violence and economic discrimination. With courts being closed, many women will no longer have access to justice.

Crimes against women, especially from the Dalit, Adivasi and Muslim communities, are on the rise in the State. The child sex ratio stands at 885 girls per 1,000 boys. This is likely to skew further in favour of boys, according to recent research which indicates that UP is likely to have the most missing female births due to son preference. This underlines again just why programmes like MS that promote gender equality are urgently needed. Is the Government listening?