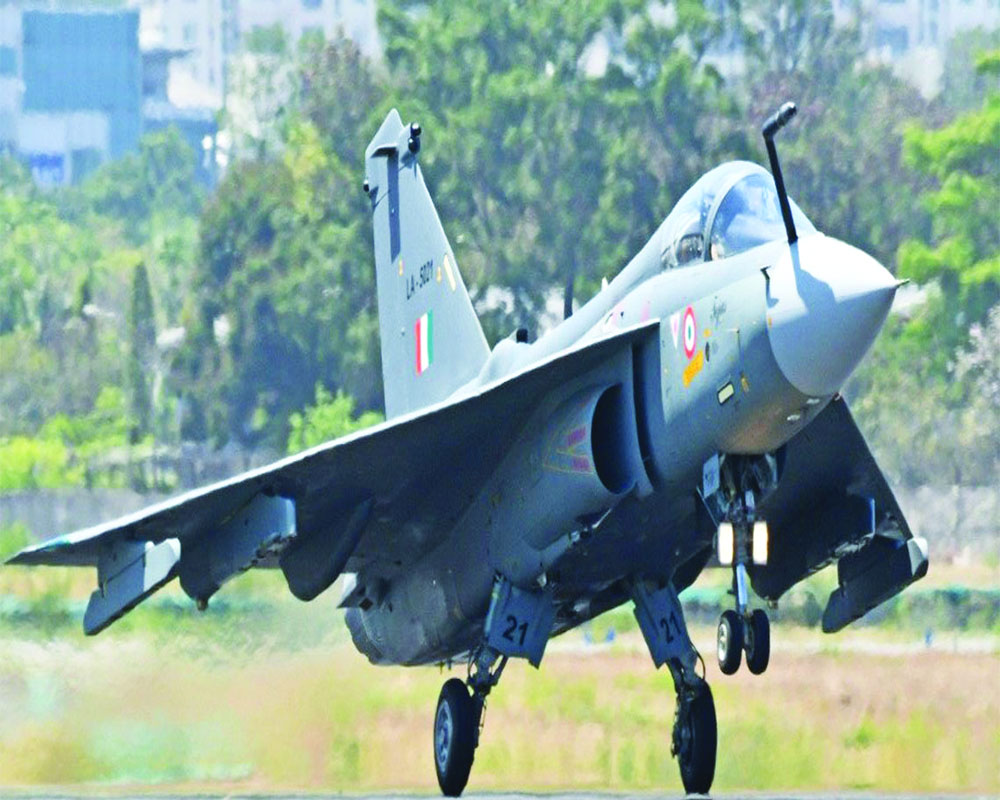 In a major boost to indigenisation drive in defence manufacturing, the Government on Wednesday approved a Rs 48,000-crore deal for producing 83 Tejas light combat aircraft (LCA) by the Hindustan Aeronautics Limited (HAL).

The induction of these aircraft will give a much-needed push to the IAF’s efforts to modernise and stabilise its dwindling fighter jet strength. While the sanctioned strength is nearly 40, the IAF has now only about 30 squadrons. One squadron has 18 to 20 jets.

If the production schedule is on time, the fleet of 83 jets will start coming into the IAF by 2026. A contract between the IAF and the HAL is expected to be inked next month. At present, the IAF has 18 Tejas manufactured by the HAL and these jets are operating from the IAF base in Sulur, Tamil Nadu.

Given the current security scenario where the armed forces have to be ready to face the possibility of fighting a two-front war simultaneously with Pakistan and China, the IAF urgently needs to shore up its number of fighter jets.

The Defence Ministry said the Union Cabinet approved procurement of 73 Tejas (LCA) Mk-1A fighter aircraft and 10 Tejas Mk-1(LCA) trainer aircraft at the cost of Rs 45,696 crore along with Design and Development of Infrastructure sanctions worth Rs 1,202 crore.

The MK-1A variant is an indigenously designed, developed and manufactured state-of-the-art modern 4 plus generation fighter aircraft. This aircraft is equipped with critical operational capabilities of Active Electronically Scanned Array (AESA) Radar, Beyond Visual Range (BVR) Missile, Electronic Warfare (EW) Suite and Air to Air Refuelling (AAR) would be a potent platform to meet the operational requirements of the IAF.

It is the first “Buy (Indian-Indigenously Designed, Developed and Manufactured)” category procurement of combat aircraft with an indigenous content of 50 per cent which will progressively reach 60 per cent by the end of the programme.

The Cabinet has also approved infrastructure development by the IAF under the project to enable them handle repairs or servicing at their base depot so that the turnaround time would get reduced for mission critical systems and would lead to increased availability of aircraft for operational exploitation. This would enable IAF to sustain the fleet more efficiently and effectively due to availability of repair infrastructure at respective bases.

Underlining the importance of the decision, Defence Minister Rajnath Singh said in a message, “The Cabinet Committee on Security (CCS) chaired by the Prime Minister today approved the largest indigenous defence procurement deal worth about Rs 48,000 crore to strengthen IAF’s fleet of homegrown fighter jet ‘LCA-Tejas’. This deal will be a game-changer for self-reliance in Indian defence manufacturing.”

He also said, “The LCA-Tejas is going to be the backbone of the IAF fighter fleet in years to come. LCA-Tejas incorporates a large number of new technologies many of which were never attempted in India. The indigenous content of LCA-Tejas is 50 per cent in Mk1A variant which will be enhanced to 60 per cent. The project will act as a catalyst for transforming the Indian aerospace manufacturing ecosystem into a vibrant atmanirbhar-self-sustaining ecosystem, Rajnath added.

The HAL has already set up second line manufacturing facilities at its Nashik and Bengaluru divisions, the Defence Minister said, adding, “Equipped with the augmented infrastructure the HAL will steer LCA-Mk1A production for timely deliveries to the IAF.”

The procurement of Tejas will considerably expand the current LCA ecosystem and help in creating new job opportunities, the Minister said. The HAL follows a system integrator model in LCA Mk1A programme and acts as an umbrella organisation, fostering manufacturing & design capabilities in private industry, he added.

Under the Atmanirbhar Bharat Abhiyaan, India is continuously growing in its power to indigenously design, develop and manufacture advanced cutting-edge technologies and systems in the Defence Sector. The manufacturing of the LCA by the public sector aeronautics conglomerate HAL will give a further push to Atmanirbhar Bharat initiative and boost indigenisation of defence production and the Defence Industry in the country.

About 500 Indian companies including MSMEs in the design and manufacturing sectors will be working with the HAL in this procurement.