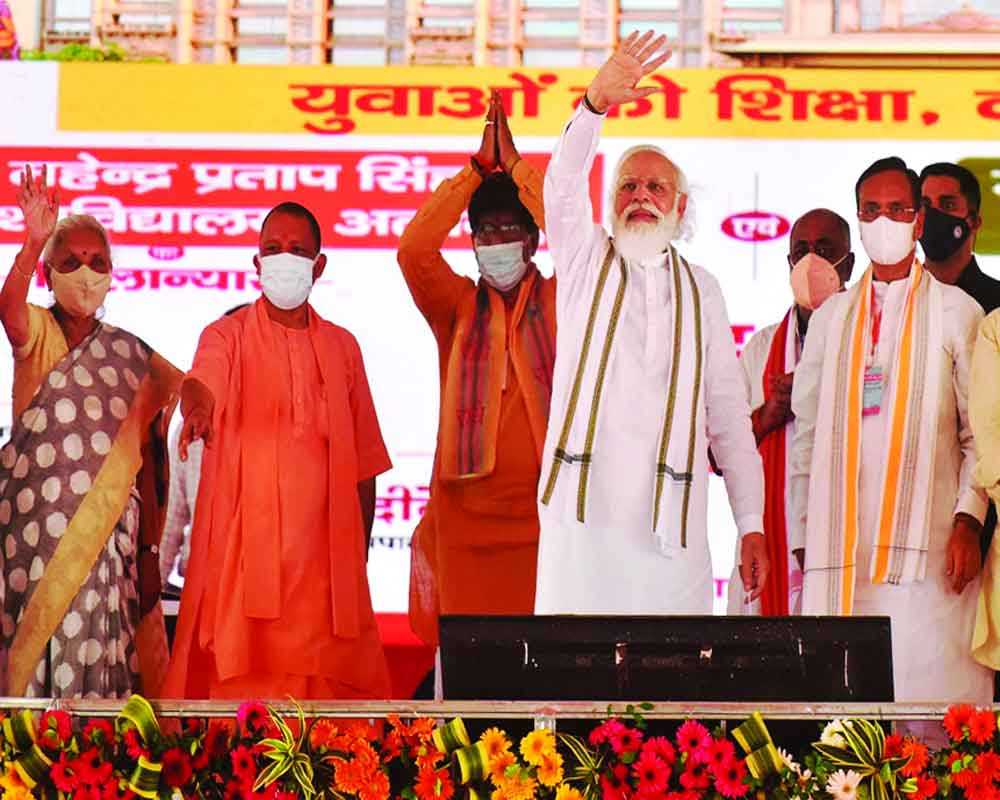 With foundation stone for Raja Mahendra Pratap  varsity in Aligarh, PM sounds bugle for UP 2022 polls

Prime Minister Narendra Modi on Tuesday laid the foundation stone for the Raja Mahendra Pratap Singh State University and reviewed the progress of work on the Aligarh node of Uttar Pradesh defence corridor, calling it a “big day” and sounding the bugle for the 2022 State Assembly polls.

Locks manufactured in Aligarh used to secure houses and now the defence equipment made in Aligarh will secure the nation’s borders, he said.

In his 40-minute address, apart from introducing the youth to Raja Mahendra Pratap Singh, Modi also highlighted the importance of Aligarh.

Praising the work of Yogi Adityanath, he said the Chief Minister has created an environment of investment in UP, wooing a large number of investors to the State.

He said the Yogi Government has given a new identity to the locks and hardware industry of Aligarh. Industries and SMSEs will get special benefits from this, and in the next few years `900 crore will be invested, he said.

UP defence corridor is bringing huge investment and employment opportunities. This happens when the necessary environment for investment is created, the PM added.

Calling it a big day for UP, Modi said Aligarh, which was known to manufacture locks for securing houses will now play an important role in securing the boundaries of India by manufacturing defence equipment. He said India will not only become self-reliant in defence but will also become a major exporter in the sector.

Talking about the defence corridor, the Modi said India is moving ahead with an aim to carve its identity as a global defence exporter and UP will come out as the country’s largest and advanced defence manufacturing centre with the manufacturing of the next-gen State of the art “BrahMos missiles” in Lucknow node of defence corridor.

“Development of Aligarh, will give it a new identity and also to nearby regions. Aligarh will work to protect the borders of the entire country,” he said.

Modi praised the level of development and the efforts being taken by the Yogi Government in the State as he said laying the foundation stone of the Raja Mahendra Pratap Singh State University in Aligarh was a big day for Aligarh and West UP.

“The occasion of Radha Ashtami today makes it more holy. Today, when India is moving towards development, the university established by the state government is a perfect tribute to Raja Mahendra Pratap Singh, a freedom fighter, educationist and social reformer,” he said.

The university set up over 92 acres in Lodha and Musepur Kareem Jarouli villages of Aligarh’s Kol tehsil and will provide affiliation to 395 colleges of the Aligarh division.

“Many of the national icons, whose contributions towards the nation have been immense, were ignored and forgotten over the decades since Independence by previous Governments. But today, be it, Raja Mahendra Pratap Singh or Suhel Dev, or many others, are being given the importance they truly deserve,” Modi said.

Lauding Yogi, Modi said the Government is working towards development in the State. “Today, Uttar Pradesh is becoming an attractive place for every small and big investor in the country and the world. This happens when the right environment is created for development,” he said.

“Under ODOP, the Government has done the work of giving a ‘new identity to the ‘locks and the hardware of Aligarh’, which has in turn given a major platform nationally and internationally to the MSMEs and the youth. The Aligarh node of defence corridor will provide a massive boost to the existing and new MSMEs and will create new opportunities for small entrepreneurs,” he said.

Hitting out at former Government led by SP and BSP, he said people of UP cannot forget what kind of scams used to happen here, how the governance was handed over to the corrupt.

Modi said before 2017, for execution or implementation of any welfare scheme in UP, we had to send letters to the State Governments frequently and even then the work used to be delayed or was not carried out in the way it should have been.

Modi said UP, which was seen as a hindrance in the development of the country is now leading the country’s big campaigns.

Stating that the Yogi Government is working towards uplifting the poor and deprived, the Modi said, “Under Yogi’s leadership, Uttar Pradesh has administered more than 8 cr vaccine doses so far free of cost. The State has a record of administering the highest doses of vaccines in a day. The State Government has worked to protect each and every life by fulfilling the mantra of Sabka saath, sabka vikas aur sabka vishwas.”