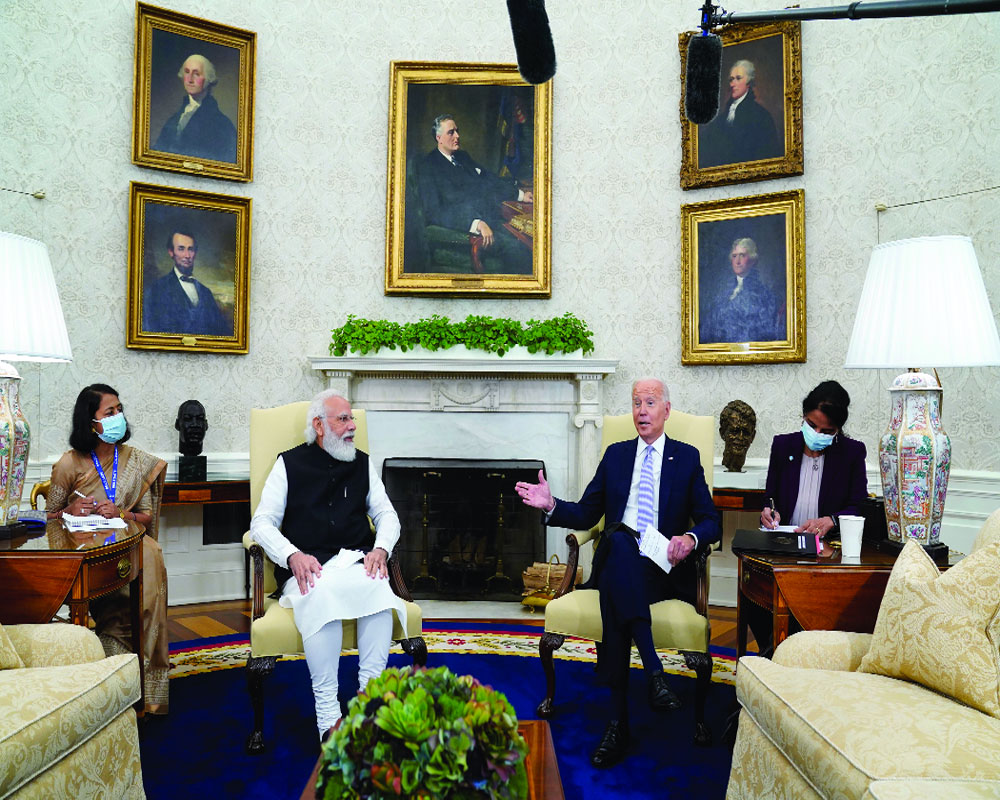 Seeds have been sown for even stronger friendship, says Modi

India and the US on Friday resolved to take their growing ties in all spheres to a new high and face the emerging global challenges in a united manner as two democracies.  They also noted technology and trade will play a major role in forging strong relations and address many issues.

This was the crucial take away from the nearly two-hour long summit between Prime Minister Narendra Modi and President Joe Biden in Washington on Friday. It was the first in-person meeting between the two the leaders since Biden assumed charge early this year.

The high-profile meeting took place against the backdrop of the raging Covid-19, growing assertiveness of China in the Indo-Pacific and the Afghanistan situation, besides the scourge of terrorism.

The two leaders acknowledged the deep ties that the countries share, with Biden and Modi saying they had met each other before and had the opportunity to exchange ideas before. Biden said he knows Modi for a long time and the first in-person meeting between the duo as US President and Indian Prime Minister will begin a new chapter in the Indo-US relationships.

“Today we begin a new chapter in Indo-US relationships. Four million Indian Americans are making America stronger every day,” Biden said. Reciprocating the gesture, the Prime Minister said he had the opportunity to exchange ideas with Biden in 2014 and 2016.

“In 2014 and 2016, I got an opportunity to talk to you. You had shared your vision for Indo-US relations. Those visions were inspiring. Now you are implementing those visions as the president,” Modi said.

“We are meeting at the start of the third decade of this century. Your leadership will certainly play an important role in how this decade is shaped. The seeds have been sown for an even stronger friendship between India and the US,” the Prime Minister noted.

“I’ve long believed that US-India relationship can help us solve a lot of global challenges. In fact back in 2006 when I was the Vice President, I said that by 2020 India and the US will be among the closest nations in the world,” Biden said.

Highlighting the relations between the two countries, Modi said trade and technology will be the driving forces of India-US relationships. “Trade holds importance on its own between India and the US. In this decade, we can be complementary to each other. There are many things with the US, that are needed by India and many things with India that can be useful for the US. Trade will be a major sector in this decade,” he observed.

Modi also said, “This decade will be shaped by talent and people-to-people linkages. I am glad the Indian diaspora is making an active contribution towards USA’s progress.”

“Today’s bilateral summit is important. We are meeting at the start of the third decade of this century. Your leadership will certainly play an important role in how this decade is shaped. The seeds have been sown for an even stronger friendship between India and USA,” the Prime Minister said.

In response, Biden said, “Relations between India and the US are destined to be stronger. We should explore what more we can do to fight Covid-19, climate challenge and work for a safer Indo-pacific. Upholding democratic values, joint commitment to diversity, respect for non-violence and tolerance are more relevant today than ever."

The Prime Minister also met his Australian counterpart Scott Morrison in Washington. The meeting came a week after they spoke over phone and reviewed the rapid progress in the India-Australia Comprehensive Strategic Partnership, including through the recent "two-plus-two" dialogue, and exchanged views on regional developments and the forthcoming Quad meeting.

Modi also met with Japanese Prime Minister Yoshihide Suga. This was Modi's first in-person meeting with Suga after he took over the reins from Shinzo Abe in September last year.