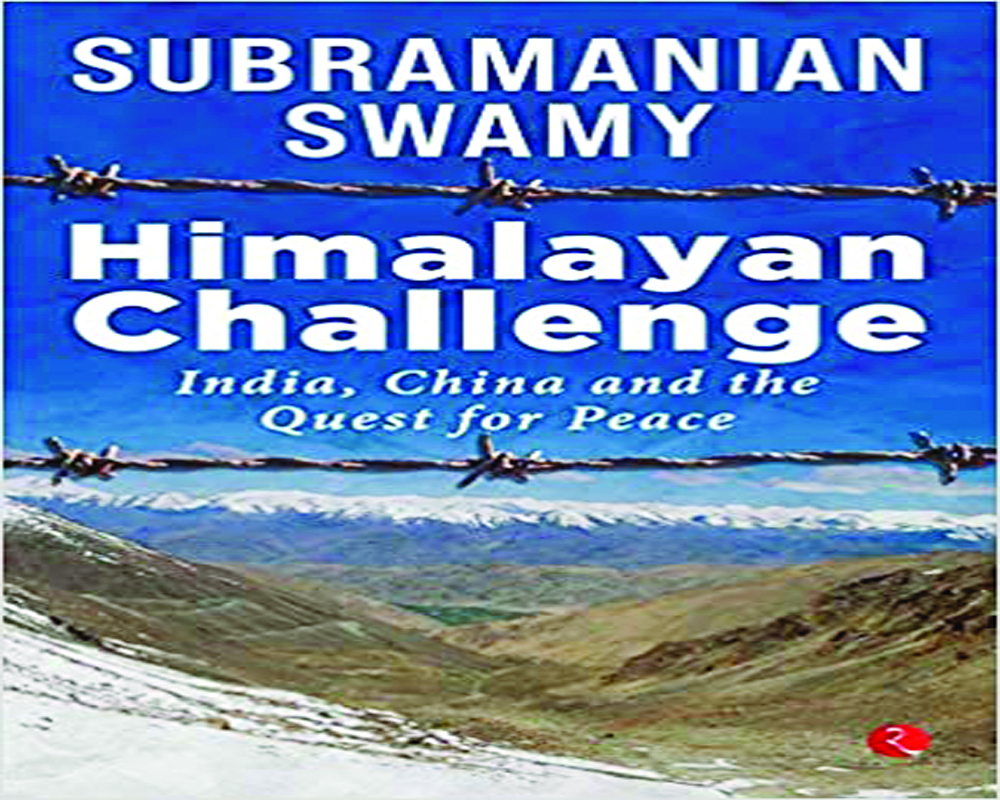 Himalayan Challenge: India, China and the Quest for Peace

Himalayan Challenge: India, China and the Quest for Peace is a book as scholarly and interesting as Dr Subramanian Swamy. A must read for those interested in India-China ties, says Kumar Chellappan

A number of former diplomats and foreign policy experts based in India have published books and research papers on India-China and India-Pakistan ties, but nobody has been able to, so far, furnish a solution to the underlying issues of discontent. Daily we see news channels and magazines accord the status of international foreign policy specialists to many “experts”, and yet these “experts” fail to come out with a China or Pak policy that can help put the apprehensions behind us.

Instead of former diplomats who take pleasure in patting their own backs for their prowess in golf courses and international connections, what our country needs is real experts who could resolve its age-old issues with the neighbouring countries. In my view, what we need is a person with the brain of Harish Salve, the patience of Nani Palkhivala and the executive skill of KPS Gill to manage China and Pakistan.

It is at this juncture that Dr Subramanian Swamy, MP and former cabinet minister, has come out with the book Himalayan Challenge: India , China and the Quest for Peace, published by Rupa Books. The book carries forward several issues that Dr Swamy had addressed in his earlier book, India’s China Perspective (2001, Konark Publishers).

Dr Swamy is an experienced Chinese hand and in my view, if there is anyone in India who is capable of highlighting the real issues haunting India and China, it is him. Dr Swamy teaches economics to policy makers in China, speaks fluent Mandarin and enjoys a powerful rapport with people who matter in that country.

Even today, the trade between the two nations continues to be in favour of China. The firecracker industry in Tamil Nadu’s Sivakasi has gone bust because of smuggled firecrackers from China.

All eyes turn to the two neighbours whenever a meeting between the premiers takes place. A lot of hype was generated when Indian Prime Minister Narendra Modi entertained Chinese President Xi Jinping in Ahmedabad immediately after the former’s swearing in as Prime Minister in 2014. Ironically, while Modi and Xi were having “Chai Pe Charcha” in Sabarmati Ashram in the backdrop of various dance items, the Chinese Army were infiltrating into Indian borders and having a stand off with Indian soldiers. The matter did not end there. During Modi’s return visit to China, the stand off was repeated at a different place.

When Xi came to India after the 2019 Lok Sabha elections for the Mahabalipuam summit, Modi charmed his Chinese guest wearing a typical Tamil Nadu veshti, angavastram and cotton shirt, much to the surprise of Tamil Nadu politicians.

If the words of K R Nagarajan, founder of Ramraj & Company (the pioneers in manufacturing branded Veshti) are to be believed, sales of veshti and angavastram shot up after the Mahabalipuram summit! That was the only positive outcome of the high profile meeting. Within months, whatever positive vibes were generated at the sea side resort gave way to animosity and India lost the lives of her gallant army officers. However hard Indian leaders try to charm the Chinese leadership, the latter continue with their treacherous approach, says Dr Swamy in his book. Even if India bends backwards to please the Chinese by recognising that country’s hegemony over Tibet, they view India with suspicion.

According to Dr Swamy, India and China constitute 36 per cent of the world population and the two countries would be able to control global affairs if they work in tandem. “Issues like visa, line of control and Tibet are mere pinpricks which could be addressed if India speaks to China from a position of strength,” he had said.

He is of the view that the issues between India and China could be resolved if our government have structured its policy based on intentions and capacity. “You should understand your as well as the Chinese’ intention and capacity,” said Dr Swamy.

He also wanted Dalai Lama, the spiritual leader of Tibet, to be told in no uncertain terms that Tibet was an integral part of China. “Dalai Lama is welcome to stay in India to propagate spirituality but not politics. Two Prime Ministers of India, Jawaharlal Nehru and Atal Behari Vajpayee had declared Tibet an integral part of China and the subject ends there. The Chinese are afraid whether India would join USA in the eventuality of an uprising in Tibet. It is our responsibility to clear that apprehension from the mind of the Chinese leadership,” says Dr Swamy.

Though the Chinese has built a series of ports at strategic points in the Arabian Sea, Indian Ocean and Bay of Bengal, India can counter it in association with Indonesia, feels Dr Swamy. “Build a major port in the 90 km stretch between Andaman Nicobar islands and Sumatra. China’s international trade passes through this region and we can call the shots. Moreover, Indonesia is not at all disposed favourably towards China,” he writes.

Dr Swamy pointed out that the ties between the two Asian giants dated back to 3000 years. “Before 1962, there never was any military conflict between India and China. The 1962 war was a fall out of the short sighted policies followed by former Prime Minister Jawaharlal Nehru,” he said.

According to Dr Swamy, Tibet was handed over to China by Nehru though he was advised by Sardar Patel not to do so. “The 1959 disturbances in Tibet which saw the Dalai Lama seeking asylum in India proved Nehru wrong,” Dr Swamy pointed out. Sardar Vallabhbhai Patel in a letter dated 7 November 1950 had cautioned and warned Nehru about the perfidy the Chinese has reserved for India. Nehru chose to ignore words of wisdom from the Sardar and the country continues to pay for his foolishness.

He also said the Chinese economy could be ruined if India starts importing electronic and other manufactured goods from east Asian countries like Taiwan and opt for value addition. “Nearly 80 per cent of the goods dumped on India by China are goods purchased by the Chinese from East Asian nations in semi processed stage. They complete the processing and re-export the same to India,” he said.

Most of the East Asian nations were willing to set up their manufacturing plants in India. “But our infrastructure facilities are in a state of mess. Unless it is rectified and revived, no one would come to India,” said Dr Swamy.

The book has reproduced the interview/discussion Dr Swamy had with Deng Xiaoping in 1981. That explains everything. Has any CPI(M) leader met Deng and held discussions with him? For the Marxists, Deng was their Tiruppati Balaji or Lord Ayyappa (to get a darshan for 30 seconds and that too from a distance of 50 meters!).

Himalayan Challenge is a book as scholarly and interesting as Dr Swamy. A must read for those interested in India-China ties.