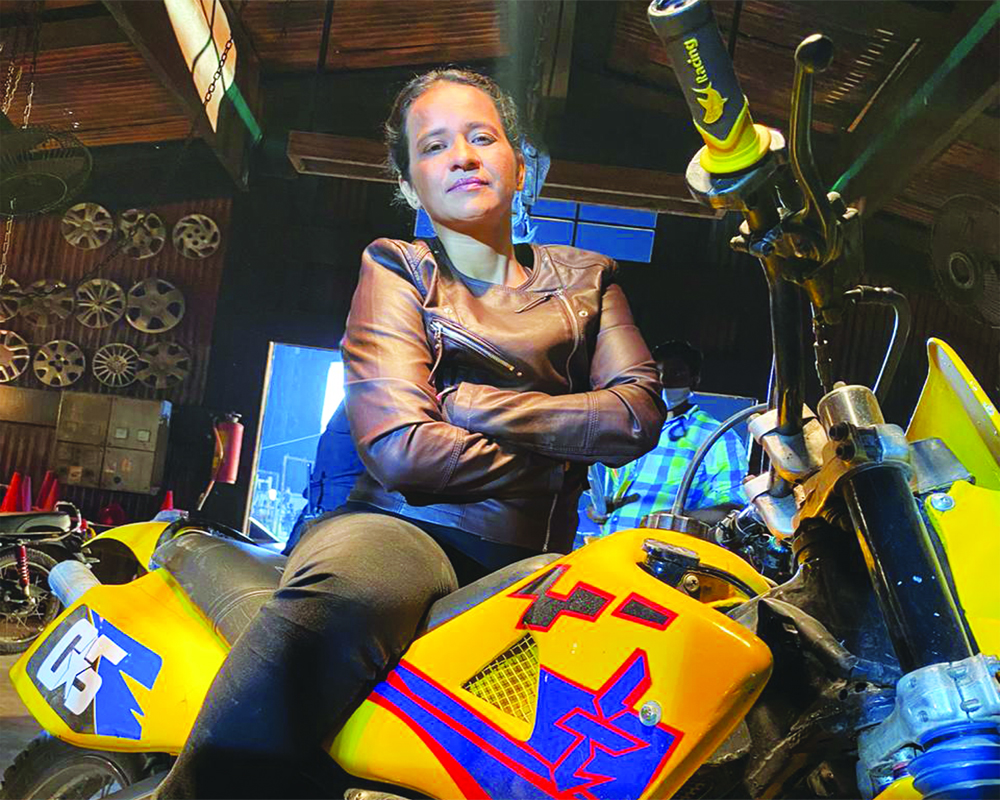 Remember all those menacing stunts that Nila did in Robot 2.0? Did that make you skip a heartbeat and left you wondering how is it possible? Or for that matter other action sequences in Bollywood films where you wonder how those petite women manage to do such life-threatening stunts? Well, meet Geeta Tandon, the Bollywood’s stunt woman, who has been a part of the industry for about 14 years now, for whom leaping from a skyscraper, or driving a burning car or even putting herself on fire is nothing but a piece of cake.

Ask Tandon, how she ended up in the field and she is quick to answer the field chose her. It was only after walking off a bad and abusive marriage, that she decided to take up each and every work that shall come her way in order to stand on her feet.

“I never got a chance to pick and choose things in life. Whatever came my way, I took that up. It all started when things went extremely bad in my married life. After many years of going through the torture, one day I decided to leave my in-laws place and start a new life. Being a mother of two, it was indeed a difficult step to take, but it was very well needed,” Tandon tells you.

Until 2007, Tandon did all kinds of work, from working as a house help to giving people massages and to dancing at weddings, but she never lost hope.

“I wanted to make a name for myself. Anyone can earn and live a life, but I wanted to live a life where I was being respected. I wanted to spend a meaningful life. Even when I started working, things didn’t go as planned. I had to shift places multiple times. My husband would come and shout. He used to call me names and said everything he could. It was a routine. Gradually, I became thick-skinned and learnt to give it back to him, even at the cost of having to shift places again,” she says.

It was only after getting a chance to work as a stunt woman in Bollywood that Tandon’s life changed once and for all.

“In 2007, I had started going to shooting to perform folk dance. But somehow, I was not satisfied with my work and was on a lookout for something better. One day, I met a person who asked me if I would be interested in performing stunts. That very moment, I knew that it was the field I was looking for. I immediately nodded and started working from the next day,” she tells you.

Tandon’s first day on the sets was difficult, with having zero knowledge of performing stunts, she learnt on the job and so well that now she is one of the renowned stunt women in the industry.

However, things didn’t go as smooth in Tandon’s life. Just when her career was about to take off, she met with an accident on sets which left her bedridden. “In  2009, I suffered a spine injury during a stunt. Back then, I was a newcomer and didn’t know much about how it works. Before any stunt, the action department has to check for the safety of the stunt person. But I didn’t have much knowledge about it and hence the accident happened,” she says.

It was a scene, where Tandon had to suffer a bullet and fall down from a one-floor building. “During that fall, an iron fence came between the ground and my back. I suffered major injuries of spine from that blow and life went off track for six months,” she recalls.

It was then, she says, when she started losing hope. She started questioning God about what next and how many difficulties are still waiting for her on the way. “That time, I was living hand to mouth and no work meant no food. Somehow, I gathered courage and started taking therapies. I began to stand and walk without any support. Once I was back on my feet, I started calling people for work. In return, I had to hear that they won’t take a risk by signing me for the job. I had to convince people that I was doing fine and is ready to take the responsibility. Soon after, I started getting work  again, but on a slow pace,” she tells you.

Tandon recalls a time where she had to do the same stunt 100 times  in a day.

“It was for Robot 2.0 and the action director wanted it to get as smooth as possible. Hence, I ended up performing the same stunt 100 times and in the exact same way. But that helped, when I was called on the sets for the shoot, I managed to do it in one go,” she narrates.

She tells you that there is nothing called a man’s job. “There were some people who doubted my capability of performing stunts. Some even gave me weird stares. Many said: “Agar nahi ho payega to woh ladka hai na, usey bula lenge”. But I never took their words seriously, I just shut them up with my actions. I showed them how well I can do it. Not that this happens only in this industry, it happens everywhere. One just has to learn to brave all these stares and taunts,” Tandon says. She adds that she prefers to perform stunts without retakes because that way there is less danger.

“I always try to give the best of the shot so that there isn’t a need of a retake. I recently gave a fire shot where I suffered minor burns on my face. But I still completed that shot and then laid down. If I would have had stopped then and there, I would have had to do it again all the way and it would have been a problem for me. Hence, I try not to do retakes and stay calm and patient in such situations,” Tandon, who till date have performed hundreds of stunts in serials, films and ads, mentions.

Her favourite stunt, however, is chasing cars. “I enjoy chasing cars, that is one of my favourite,” she says.

For what Tandon does, apart from a strong-willed heart, one also needs just as strong body and to maintain that exercise is the key. “I exercise for about two-three hours a day, depending upon my schedule. As for the diet, I eat normal ghar ka khana. It does the trick for me,” she says.

There are many upcoming projects in Tandon’s kitty. “I have got my hands full. There are some projects that I am working on and will share details soon,” she says.