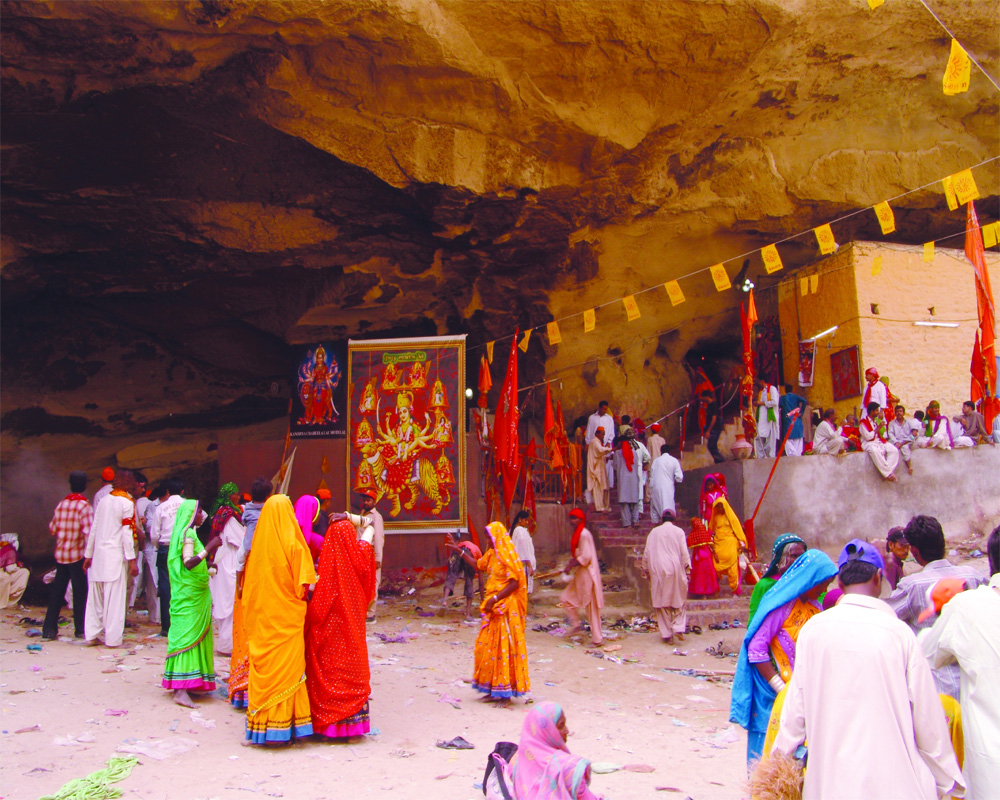 Renowned writer and historian Dr Alka Pande narrates that while the Shakti Peethas represent a single philosophical fold, they are a testament to the diverse legends of Shakti. An edited excerpt

Originating from Sanskrit, the word ‘Peetha’ means ‘seat, altar, shrine or dwelling’. In the case of the Shakti Peethas, it is very specific. It is the sacred space where the Supreme Goddess rakes a strong, well-founded sear on Earth. Each of the Peethas have been turned into shrines for the Goddess by the very people who believe in the absolute power of the feminine. Each site where the 51 body parts of Sati fell, came to be known as a Shakti Peetha.

A teertha is a crossing. As with most Sanskrit words, there are multiple meanings of this too. Teertha is also the passing of the atman to the parmatman the crossing from the physical world to the metaphysical world. These 51 sacred sites are also linked by theologists and scholars to the 51 alphabets of the Sanskrit language. In each of the Peethas also resides Kaalbhairava, which is another name of Shiva. Most of the Shakti Peetha shrines contain a naturally appearing stone which becomes the object of worship around which the temple shrine is built.

Vindhyavasini is an additional Shakti Peetha, which I have deliberately not included in the 51 Peethas. While a powerful dwelling of Shakti, Vindhyavasini is not the abode of Shakti as Sati’s body parts. It is, however, the preferred choice and home of Yogamaya, the sister of Krishna, who escaped from Kamsa’s prison at Mathura.

Kalika Purana indicates that there are four Adi Shakti Peethas, which is further affirmed in the commentary and text of Brihat Samhita. It lists the names of the location at various places in India such as Vimla temple, Odisha, where her feet fell, Tara Tarini temple in Behrampur, Odisha, where her breasts fell, Kamakhya temple in Guwahati, Assam, where her yoni or vagina fell and lastly, the Kalighat temple in West Bengal, where her right toe fell.

THE ICONOGRAPHY OF THE DEVI

Since antiquity, Goddess worship has been part of the Indic tradition of India. In fact, the Goddess is even more popular than Shiva and Vishnu. All the manifestations, avataras or appearances of the many forms of Devi belong to the pantheon of the Shakti cult. The Supreme Goddess can be a gentle life-giver as in the case of Lakshmi, Saraswati or Parvati, or as the mistress of death in the form of Durga, Kali and Chamunda. She is a fascinating juxtaposition, both life-perpetuating and potently destructive. In her life-giving form, Shakti can be represented as beautiful, benevolent, maternal, knowledgeable, compassionate and even desirable to the best. She invigorates, cheers and brightens the entire universe. She is represented and described as an idealized woman who is imbued with beauty, virtue and righteousness, and adorned with jewels. In fact, her iconography is drawn from the pre-modern depictions of the salabanjikas, apsaras and surasundaris. In this form, Shakti embraces and enlivens all aspects of reality. As the goddess of destruction and disease, she takes on rather unattractive and repulsive forms. As Sitala Devi Manasa, or Kali, the Devi is shown as haggard, ugly, unkempt and emaciated. However, whatever the form, it is always powerful.

I have dipped into both Puranic and Shakta texts to read the many interpretations and mythologies associated with the iconography, rituals of worship, devotion and representation of the Shakti Peetha as sites of immense power and energy. Each devotee enters the site of the Peetha through their own path of worship, through their respective understanding of the Great Goddess. The wama panthis or Shakt worshippers, for whom Shakti/Devi is supreme, enter through the tantric path, which is a sectarian movement.

The 51 Peethas have their own singular iconography and their own specific modes of rituals, worship and even prasada, with some standard common offerings like flowers, sweets and vermilion.

RITUALS OF PRAYER AND DARSHAN

While the Shakti Peethas were specific to the body parts of Sati, the rituals of adoration, prayer and worship differed from region to region, given the culture and history of the place. Over time, the Peethas became linked to their respective regions. The local people took ownership of them and started claiming rights over the teerthas and sites. Naturally, the local food and religious and cultural traditions started getting preference over the stated Puranic or standard Sanatan dharmashastras.

In the temples, the daily rituals of worship were similar to the presiding deity, who was normally male, i.e. Vishnu or Shiva, and the feminine was worshipped in the form of their consorts. However, in the Shakti Peethas, the presiding deity was a body part, which while having its own specific service or prayer, was enfolded in the larger narrative of the worship of Shakti in the form of Devi.

The purpose of puja (prayer) is to appease, soothe and mollify the powerful Goddess and embrace the divine energy expressed as life force. The life force itself has many variations, from auspiciousness, health, desire for children, wealth and success, gaining power over intellectual and artistic skill, even victory over enemies. The ritual of puja is heavily invested in darshan. While doing puja, the concept of making eye contact with the deity is the key. Darshan is a two-way concept where the devotee sees the divinity and in turn, the divinity sees the devotee. The concept of darshan crosses all spaces, from intimate puja corners at home in domestic spaces to large public temples including the 51 Shakti Peethas.

The very act of darshan/view is the crucial key that creates the iconic moment where the devotee and the divine are in complete sync. This is the reason why ‘Shakt’ worshippers make long and arduous journeys to the Shakti Peethas. The idea is to take the energy of the Supreme Goddess while receiving her blessings. The religious rites have three distinct classifications: Nitya, which is daily, normally done at home; Naimittika, which are important days of the deity, and particular festivals (some special to the ishta deva at home or to the presiding deity of   the temple); and finally Kamya, which are optional, but a highly desired teertha being one of them.

The ritual of prayer to Shakti is also vested in the panchbhootas, where the five jnanaindriyas, or senses, are included in the aspect of puja:

Prasada is both an offering and a blessing. It is offered by the devotee when he/she begins the ritual of puja. In domestic spaces, the devotee performs the puja at an individual, intimate level, often making prasada or an offering of fruits, and a rice and milk pudding with saffron strands and sprinkled with mewa/ nuts, particularly almonds and raisins. What I have observed in the offerings by the devotees, is that for Shakti, it is a bali, or animal sacrifice, normally a lamb and sometimes even a buffalo. The very basic prasada for Shakti is meat, alcohol for Bhairava, and a sweet, normally a rice pudding. Since the Shakti Peethas have been appropriated by the devotees of the region, naturally the prasada of the Peetha also acquires a local flavour. In Eastern India, it is primarily khichdi and kheer with poori and potato curry; in South India, it is a variation of the local rice, i.e. pulihora; in Andhra Pradesh, a jaggery laddoo; and in Western India, at the Amba temple in Banaskantha, a delicious sweet made of chickpea flour, the mohanthal, is offered along with sindoor, and makhanas, or dried lotus seeds. In this way, almost every region brings in its regional flavour and speciality as part of the prasada offered at the Shakti Peethas.

Meat as prasada is served in the temple community kitchens only on special occasions when specific sacrifices are conducted. Holding water in the palm of their hands, or achaman, the devotee asks for forgiveness and blessings before beginning their prayer. In the large public temples, it is the priest who becomes the conduit of devotion and reverence. He is the intermediary who while performing the ritual acts, offers food and flowers to the presiding deity of the temple. Worship in a temple begins by circumambulating the temple and the garbhagriha where the deity lives.

The myth of Sati and the 5l Peethas is an important myth in the worship of the Supreme Goddess. It lays down the template for all those who believe in the Absolute Power of the Mother Goddess, crossing borders from Tantra to Mantra, from Devi Bhagwat Purana to Yogini Hridya Tantra, right down to the popular Grama Devi in a village to the Kula Devi of a Rajput clan.

SHAKTI AND HER BHAIRAVA

A typical feature in each Shakti Peetha is the presence of a manifestation of Shiva in the form of Bhairava. Sati, whose body parts create the Shakti Peethas, is married to the primordial god, Shiva. However, the Shakti Peethas are completed with a Bhairava shrine within the complex.

The fierce form of Shiva is Bhairava, who himself has many manifestations. He is even present in Buddhist and Jaina iconographies. In Vajrayana Buddhism, he is known as the Bodhisattva Majushri, Heruka, Vajrabhairava and Yamantaka.

Bhairava is also known as the wandering form of Shiva-the fearful form who is the annihilator. As Mahakaal Bhairava, he is the keeper of time. As Dandapani, he holds a danda/rod to punish the sinners. And as Swaswas, he is one whose mount or vehicle is a dog.

Bhairava moves into the realm of the tantric and with his consort Bhairavi. In this, he is prayed to at midnight during which time, the couple give darshan to their faithful devotees. It is believed that there are 64 Bhairavas, who are divided into eight categories, known as Astabhairavas, the guardians of the eight directions. They are Asithaanga Bhairava, Ruru Bhairava, Chanda Bhairava, Krodha Bhairava, Unmattha Bhairava, Kapaala Bhairava, Bheeshana Bhairava and Samhaara Bhairava.

Along with Ganesha and Hanuman, the two most popular gods of the Hindu pantheon, the Mother Goddess or Maa is present in every home in the form of the domestic mother herself. I would like to end with a shloka from Devi Upanishad where the complement of man and woman in the form of Shiv and Shakti is expressed, which is also the base of the Samkhya Philosophy:

‘It is only when Shiva unites with thee, O Shakti, that he becomes the all-powerful Lord. Left to himself, he lacks even the strength to raise his little finger.’

Excerpted with permission from Shakti: 51 Sacred Peethas of the Goddess by Alka Pande, Rupa, Rs 295