Reminiscing the era of Dons

Reminiscing the era of Dons 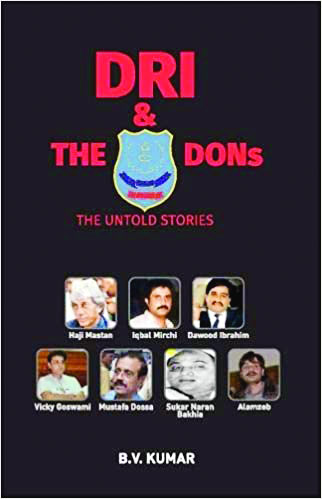 DRI & The Dons: The Untold stories

The book is BV Kumar’s memoirs as an officer and boss of DRI where he spent nearly four decades tracking the smugglers of precious metals, currency and narcotics, writes Kumar Chellappan

There was a time when hawala operations were not secret, at least in Kerala, which had ties with West Asian countries. The expatriates from Kerala who went to these nations in search of greener pastures could find well paying jobs, but they faced a major hurdle in sending the money back home. Taxes were high and there were restrictions on the amount which one could send. The easiest way was hawala which ensured that the sender’s family received the amount within hours.

Same is the case with gold smuggling. The yellow metal was cheap in Dubai, a free port. In India, gold costs at least 60 to 70 per cent more than what it costs in Dubai because of taxes. No wonder, many people took to gold smuggling in a big way in Kerala. Over the years, smuggling of the precious metal was accorded a social status. I have heard that a movie Moghul from the State who made it big through gold smuggling introducing himself to friends: “Hello, I am Mr ….. and a smuggler from Kerala”! With off-white pants, shirts, a thick gold chain visible through the unbuttoned shirt and a packet of 555 cigarettes made the typical Malabar businessman till the 1990s.

The stature accorded to smugglers were out in the open as viewers went into a state of delirium when Mohanlal and Mammootti, portrayed the characters of Dons hoodwinking Customs and Police to smuggle in gold and currencies.

It was in 1990s that Prof Arun Kumar of JNU published The Black Economy in India in which he remarked that the parallel economy in India is more than Rs 1 lakh crore and described it as the after effect of smuggling, commission, corruption and hawala. Economists and policy makers are of the view that the parallel economy has grown manifold since the liberalisation of the economy in 1991.

Smuggling and trading of precious metals have assumed alarming proportions in India. Seizure of smuggled gold and foreign currencies at airports have become a routine affair in all major airports of the country. News related to these seizures are read and forgotten within hours because there are many other interesting incidents are reported from all over the country thanks to 24X7 news channels catering in all languages.

The recent seizure of gold which was being smuggled in through diplomatic channels at Thiruvananthapuram International Airport caught national attention mainly because of the involvement of Swapna Suresh, a middle-aged celebrity in Kerala’s social circles. Her arrest by the NIA has opened a pandora’s box and it is the hotly discussed issue in South India. The involvement of the powerful people in the State and the close liaison aunty Swapna had with government secretaries, IPS officers and sons and nephews of ministers and politicians are the current rage.

It is at this juncture that B V Kumar, the former director general of Directorate of Revenue Intelligence, a Government of India elite organisation hitherto kept away from media attention, hit the bookshelves across the country with DRI and The Dons: The Untold Stories. Kumar, known for his integrity, honesty and dedication has always led from the front his men and officers against smugglers. This IRS officer is credited with taking on Dawood Ibrahim, world’s most wanted fugitive, much before the latter’s ‘elevation’ into the big league of crime.

The 445 page book is Kumar’s memoirs as an officer and boss of the DRI where he spent nearly four decades hunting and eliminating the enemies of the nation who were out to subvert the economy of the country with the help of illegal gold, silver and narcotics. What makes the book special is not because of its account about the Dons of Dongri but the description on the magnitude of the havoc caused by a miniscule section of mobsters whose actions have made life difficult for us. The book has topical significance as Kumar describes Kerala as Gold’s Own Country and quotes an anecdote which sums up the reason behind the State’s insatiable hunger for gold.

The author could have summed up the influence wielded by gold smugglers in the State’s politics. A person who was incarcerated in jail for 19 months on charges of smuggling rose to become the minister in Kerala Government during 2001 to 2004! No prize for guessing the name.

The modus operandi followed by even educated people engaged in gold smuggling could be understood from what my school fried Abdul Rehman told me. His brother who was employed as an engineer in West Asia ‘smuggled’ in gold in bottles of olive oil. This happened in the 1970s. The Rehmans are millionaires now!

There were no mobile phones, speed boats or hi-tech detectors those days. Still, Kumar and his men performed their duties with the limited facilities at their disposal. Gold and drug smuggling have grown leaps and bounds in India. It is for the policy makers to chart out means to prevent the cancerous growth of this anti-national activity. The other day I saw a CPI(M) leader declaring in one of the channel debates that gold smuggling is not a criminal offence and there is nothing to be ashamed of about it. It is time we had a supersleuth like BV Kumar in the DRI.

More than a book, DRI and the Dons is a treat to read. One gets to enjoy all the information told in Kumar’s own style. Once you read the book in full, you become richer in knowledge. It gives an insight into persons like Sukar Naran Bakhia who in Kumar’s words, had for a fondness for virgins which led to his downfall.

But at the end, the book evokes a sense of pathos through the story of K N Entee, a customs officer who chased a group of smugglers in a rickety Government vehicle and lost one of his legs in the ensuing fight with the criminals.