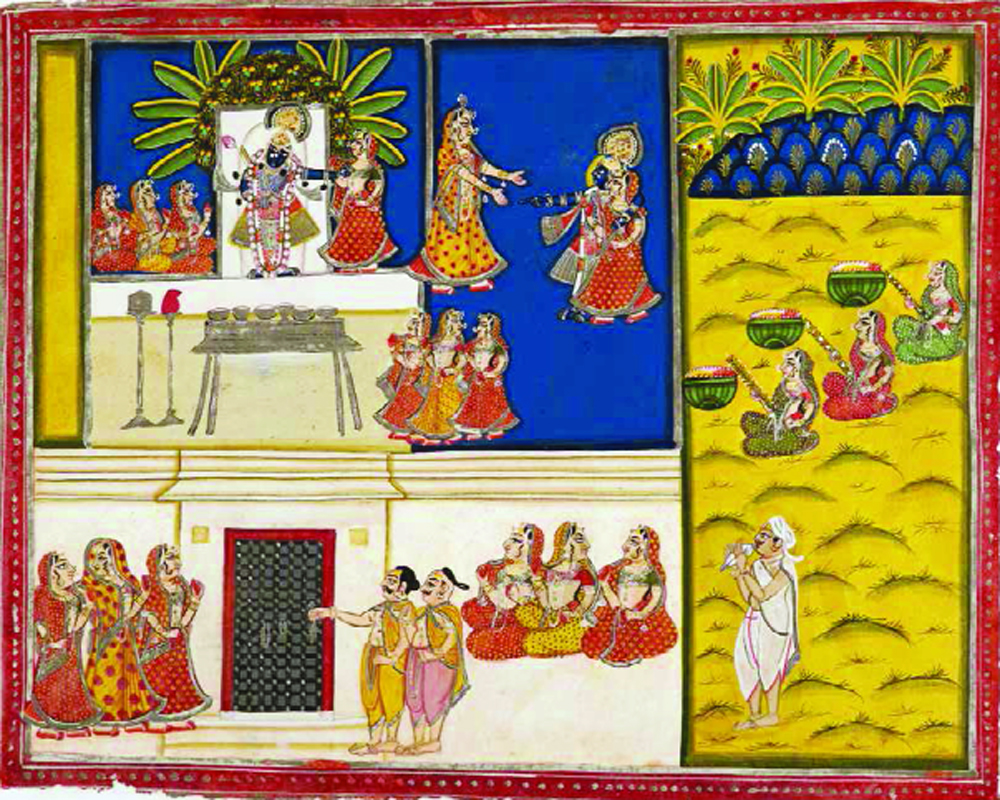 Tucked into the folds of the Aravalli Hills, about thirty miles north-east of Udaipur, is the bustling pilgrimage centre of Nathdwara, home to Shrinathji, the living image (svarup) of Krishna raising Mount Govardhan. The establishment of the deity’s haveli (mansion/temple), in Mewar in the seventeenth century, gave rise to a town that completely revolved around Shrinathji and the activities at his palatial shrine. The haveli brought together a myriad of diverse social groups such as masons, potters, tailors, silversmiths, embroiderers, brocade weavers, enamel (meenakari) workers, cooks and carpenters, all performing divine service (seva) for the child-god Krishna. Most importantly it fostered the growth of a painting community, drawn from various towns in Rajasthan, that came to serve the needs of the haveli and the pilgrims.

Nathdwara became a unique centre, its rituals and traditions remaining virtually unchanged for over 300 years. Until recently it was in a time capsule, maintaining artistic traditions that had vanished from the Rajput courts. It was the archive for the styles and techniques of the courtly painting studios of Rajasthan as well as the home to its own unbroken artistic tradition for over three centuries. There were hundreds of artists from the Jangir and Adi Gaur castes dedicated to serving the temple and providing painted icons for the pilgrimage trade. It is sad to learn from Madhuvanti Ghose that all this is now being threatened, eroded by the growth of the town and the encroachment of the twenty-first century.

Over the last forty years Nathdwara’s uniqueness has garnered the attention of scholars and produced an explosion of research on the pilgrimage centre. When we first worked on the Calico Collection of Nathdwara pichhavais (Indian Pigment Paintings on Cloth) in the early seventies there were very few publications about Nathdwara. Most notable were Robert Skelton’s Rajasthani Temple Hangings of the Krishna Cult (1973), Renaldo Maduro’s Artistic Creativity in a Brahmin Painter Community (1976) and Rajendra Jindel’s Culture of a Sacred Town (1976). Since then outstanding art historians such as Tryna Lyons, B.N. Goswamy, Amit Ambalal and Madhuvanti Ghose have made significant contributions to the understanding and preservation of the history of Nathdwara’s artistic community. In addition to the art historical aspect of the sacred town, there has been an avalanche of material published on the literary, political, socio-economic and anthropological facets of Nathdwara. The plethora of online texts and translations as well as the new publications bowing the library shelves attest to Nathdwara’s continuing appeal as a research subject.

Until the seventeenth century Nathdwara (Door to the Lord) was only a remote dusty village called Sinhar in the state of Mewar. It soared to fame when Shrinathji and his followers, threatened by the rise to power of the iconoclastic Mughal Emperor Aurangzeb, fled Krishna’s sacred homeland of Braj and sought refuge in Rajasthan. It is said that the Maharana of Mewar with a retinue of 100,000 warriors went out to escort Shrinathji personally to his capital of Sesodias but that the bullock cart carrying Krishna became bogged down in the mud in the small village of Sinhar. It was taken as a sign that Shrinathji had selected this spot along the Banas River as a haven.

This is the most commonly accepted version of the move and one that we subscribed to in our 1979 publication, but it is debatable whether the Vallabhacharis, so named for their guru Vallabhacharya (VS 1535-1587; 1478-1530 CE), fled the area out of fear of persecution or whether they made a judicious decision to resettle in Rajasthan. It is possible that the uncertainty caused by Aurangzeb’s threats reduced the pilgrimage trade and affected the temple revenue. The Shrinathji ki Prakatya Varta records that Aurangzeb’s messenger delivered an ultimatum to Vallabha’s grandsons that ‘either the fakir of Gokul show some miracle or leave the Mughal Empire’. This rude warning must have come as a shock. Prior to Aurangzeb’s reign the Vallabhacharis had enjoyed Mughal favours and were protected by several firmans issued by Akbar and Shah Jahan that gave them grazing rights over the land stretching from Gokul to the whole district of Mahaban. In addition, they enjoyed the privilege of being exempt from taxation. It is debatable whether they fled or simply decided to reestablish the sect in the land of wealthy Rajasthani maharajas whom they had cultivated as devotees. E. Allen Richardson argues that Maharana Raj Singh of Udaipur, beginning in 1665, with the gift of the village of Asotiya in Mewar to two goswamis, was preparing a place for the Vallabha Sampraday and that Maharana Raj Singh foresaw the economic and social benefits of bringing the popular sect to Mewar.

Among the Vallabhacharis there is a story that explains the situation without tarnishing their relationship with the Mughals. On one of his missions, Vitthalnathji (VS 1572-1642; 1515-1585 CE), the son of Vallabhacharya, had visited Sinhar where he initiated into the sect one Ajabkunvar, the sister-in-law of the legendary Bhakti poetess Mirabai. Ajabkunvar became so passionately attached to Shrinathji that she asked him to visit her every night. Shrinathji granted her wish and came every evening, traversing hundreds of miles from Braj, to play with her his favourite parcheesi-like game of chaupar. Finally, seeing him red-eyed and exhausted from his travels, Ajabkunvar requested Shrinathji to settle in Mewar permanently. Shrinathji replied that it was not possible for him to do so now but that he would in the future after the time of Vallabhacharya and Vitthalnathji. In 1669 when the persecution grew acute, Vitthalnathji and Vallabhacharya had both passed away. It was time for the promise to be fulfilled. The bullock chariot carrying Shrinathji reached Sinhar in VS 1728 (1671 CE) and it came to rest beneath a pipal tree where Ajabkunvar’s house had been located. It was to be Shrinathji’s new home. Tradition holds that Shrinathji’s shrine is the only one in the sect with a tiled roof in imitation of Ajabkunvar’s house.

Interestingly the account of the move in the Shrinathji ki Prakatya Varta records none of the pomp that James Tod describes in his Annals of Rajasthan. According to Harirai (b.1590), author of the Shrinathji ki Prakatya Varta, and a member of one of the thirty-six families that accompanied Shrinathji to Rajasthan, the move was done as quietly as possible. Perhaps it was the Maharana of Mewar who wanted to make a great show of Shrinathji’s arrival whereas the Vallabhacharis wanted only safety for their svarup.

No doubt the flight was a major disruption for the Vallabhacharya Sampraday. When the upheaval occurred in 1669, the sect had been established well over 150 years on Mount Govardhan, the location where Shrinathji first appeared. It was a shift not taken easily for this was Krishna’s birthplace, the playground for his lilas (sports) and most importantly the site of Shrinathji raising Mount Govardhan as an umbrella to protect his people from the punishing deluge sent by the storm god Indra. Even though the teenaged Tilakayat Damodarji (VS 1711-1760; 1654 -1703 CE) was supported by his uncles, Gopinathji and Balakrishnaji, it must have been an emotionally trying decision for him to make. The sect had strong roots in Braj.

Yet the Vallabhacharya Sampraday was an immensely popular sect with many adherents. Both Vallabhacharya and Vitthalnathji had made extensive pilgrimages throughout Gujarat and Rajasthan recruiting new followers. Besides Shrinathji’s appeal to the common people, almost every royal house of Rajasthan could be counted among Shrinathji’s devotees.

After Shrinathji’s arrival in Sinhar a shrine was erected in VS 1728 (1671 CE) which was purposefully designed as a haveli (mansion) instead of the traditional shikara-style (towered) temple. The architect of the new temple built on the pattern of an aristocrat’s mansion was Gopaldas Ustad under the supervision of Hariraiji, the author of the Shrinathji ki Prakatya Varta. Every part of the new structure was to recall the sacred topography of Braj, Krishna’s homeland.

Today pilgrims throng the halls of the haveli for every ceremony, jostling each other to reach the Nij Mandir where Shrinathji resides. The viewing periods are short, and thousands seek his darshan (viewing). Although the seva (service) is done with the utmost respect the crush of pilgrims tries the patience of those attempting to feel at one with their Lord. Outside in the streets there is almost a carnival-like atmosphere. Entire lanes are dedicated to outfitting the private shrines of pilgrims. There are shops filled with embroidered fabrics to embellish the sacred chambers and glittery brocade dresses fashioned for every size and shape of image as well as a profusion of painted, printed and sculpted images of Shrinathji. Prasad, which is made in the haveli kitchens in great quantities, is available for purchase. There are piles of ghee-laden laddus, pots of thick sweet rabri and mounds of savoury besan sev — all Krishna’s favourites. Nathdwara fosters an entire industry dedicated to the worship of Shrinathji.

Since the founding of Nathdwara, artists have been drawn to this sacred place to fulfil the needs of the haveli and to provide pilgrims with painted devotional images for their shrines. While the other schools of Rajasthani painting have died out for lack of royal patronage, Nathdwara has continued, fed by the passionate desire of devotees to serve Shrinathji and to be one with their Lord.

Excerpted with permission from Nathdwara Paintings from the Anil Relia Collection: The Portal to Shrinathji by Kalyan Krishna & Kay Talwar by Niyogi Books, Rs 3,500