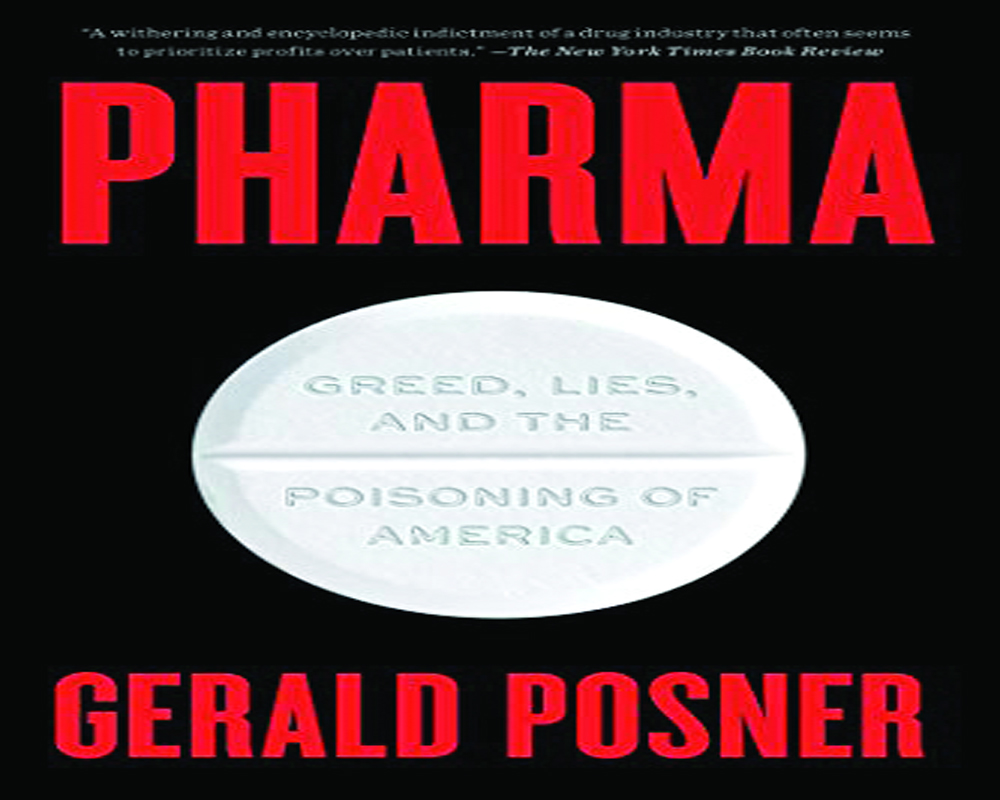 Pharma: Greed, Lies, and the Poisoning of America

What makes Pharma: Greed, Lies, and the Poisoning of America a must read is the lucid style in which Posner shares the evolution & history of global pharmaceutical giants, writes Kumar Chellappan

When Gerald Posner, a top US journalist, writes a book, one can be rest assured that what he brings out is the last word on the topic. Pharma: Greed, Lies, and the Poisoning of America is the first attempt by Posner to tread in a hitherto unexplored world: the world of pharmaceutical companies.

Everyone in the age group of 50-plus  in India has heard of Parke-Davis, Geoffrey Manners, Nicholas Laboratories, Wyeth Lab, Roche, Sandoz or E Merck. The products churned out by these companies range from Anacin, Saridon, Aspro, (pain killers which were the most sought after products once someone is hit with headache or common cold or flu) to Forhans (a toothpaste created by dentists! That’s what the manufacturers claimed) besides other medicines and drugs.

Way back in the 1970s and 1980s, students in B Sc degree classes whose specialisation was Chemistry had dreams of joining these pharma companies as chemists and make a reasonably good life in the corporate world. Nobody among us were aware of the crimes committed by some of the pharma companies to manufacture diseases along with medicines.

It took us years to know that the drug that cured blood pressure made the user a heart patient or a diabetic. The diabetic patient who consumes the medicine for blood sugar ended up as kidney patients and this cyclic process made pharma companies part of a vicious circle. The end of one disease lead to the beginning of another and there was no end in sight to these phenomenon.

Dr B M Hegde, who was honoured by Padma Vibhushan by the president of India and who is described as a cardiologist with a big heart is on record stating that in 2016, more people lost their lives because of drugs that those who succumbed to car accidents, gun violence and AIDS. Should one elaborate on why and how the pharma companies sustain their huge profits year after year and pay huge dividend to the share-holders?

One is reminded of the battle waged by Prof Hegde and Dr C V Krishnaswamy of Chennai (both classmates and colleagues in their battle against pharma companies engaged in under the table dealings) against the drug Statin, a globally banned product (except in India) used in diabetes.

Posner conveys a wonderful message through Pharma. All that glitters is not gold and not good. Most of the pharmaceutical companies do not operate in a transparent manner because they are motivated only by the urge to make cash. For that to materialise, they resort to all kinds of dirty tricks. That’s why persons with diabetes end up as cardio vascular patients and speed up the rendezvous with their Makers up in the sky.

Pharmaceutical companies and hospitals have become part of the health care industry and that is the root cause of the state of affairs all over the world. The crave for getting admission in medical colleges is just the tip of the iceberg. Only the monied class could manage medical studies in India as the country faces a severe shortage of physicians and surgeons. Though economy has been liberated from the shackles of controls and regulation, the education sector is yet to get the freedom it deserves.

What makes Pharma a must read is that Posner has told the evolution and history of global pharmaceutical giants in a lucid style. An average person should have knowledge about the pharmaceutical companies which determine our longevity. The author mentions in the preface that it was in January 2016 he sent his editor a proposal with the no-frills working title ‘A History of the American Pharmaceutical Industry’. “I had read by then several dozen good books, each about some part of the story I hoped to cover in its entirety. There were histories of epidemics and pandemics, inspiring accounts of groundbreaking lab discoveries, biographies of storied scientists and pharma executives, even business histories of some companies. There was no single volume that started with the wild anything-goes 19th century era of homegrown wonder remedies to today’s sprawling pharma conglomerates that sell a trillion dollars of drugs annually,” writes Posner in the preface. It was in the 70 post-war years that pharma transformed into a mega-industry, the author says.

Well, man’s (and woman’s) greed for longevity too began after the Second World War. Along with this unjustifiable passion, then world saw the evolution of many diseases like cancer, AIDS and cardio vascular complexities. The greed resulted in the market getting filled up with rejuvenating drugs, medicines that offered eternal youth and vitality and ever sustaining beauty. Hundreds of creams, ointments and tablets assuring one eternal youthfulness and vigor are the fall out of this passion for extra life. One has to pay for these demands. Health and pharma have become commercial products that challenge nature’s laws instead of tender, love and care. Did humanity succeed in this race? Posner unravels the instances with classic incidents. One has to read this book from page one till the end to understand the dog-eating-dog world of pharmaceutical companies.

Shady deals, mafiosos and illegal operations with money making as the sole intention form the modern day pharmaceutical industry and health care sector while the Hippocratic Oath is given a silent burial by the same persons who are expected to preserve it.

Interestingly, Pharma has a chapter on Swine Flu, a precursor to the Covid-19 devouring the world today. The swine flu scare in US in 1976 and the role played by the media in spreading a scare about a non-existent pandemic forms the core of the chapter. It speaks a lot about the evil designs of the pharma companies that came forward to manufacture vaccines for the pandemic and how the public exchequer was swindled of $135 million to pay these companies. The political masters of the USA who sanctioned the amount for the development of the vaccine sat in bewilderment as a popular newspaper spread the word that “US calls flu alert on possible return of Epidemic’s Virus”. Well, the winner, as it turned out, was the Pharma companies…

Spread across 534 pages (excluding the acknowledgement, bibliography and notes), this is a must read for those who are worried over the escalating cost of healthcare in the country as well as the secret behind the craze for MBBS and pharmaceutical courses, the seats for which are still short in supply.

Gerald Posner is certain to win many accolades and awards for this book in years to come. He has hit the world at the right time and with a right book. It is a treasure house of knowledge and information. It is surprising and shocking to see that this book remains inaccessible to review pages despite the fact that each chapter providing scintillating news.