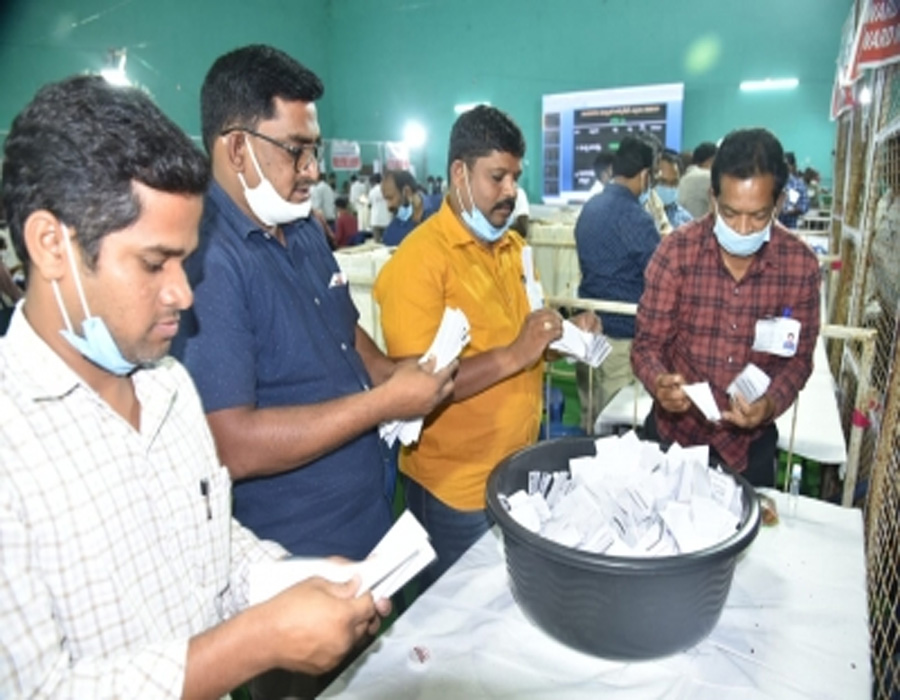 Andhra Pradesh's ruling YSR Congress Party (YSRCP) is heading for a clean sweep in urban local body election as counting of votes was underway on Sunday in 11 municipal corporations and 70 municipalities.

The YSCRCP was leading in most of the divisions in Urban Local Bodies (ULBs) which went to polls on March 10.

In the 90-member Greater Visakhapatnam Municipal Corporation, the biggest among the state corporations, YSRCP won 27 divisions out of 44 results declared till 2 p.m. The principal opposition Telugu Desam Party (TDP) won 14 divisions while the Jana Sena Party (JSP) of actor-politician Pawan Kalyan was distant third with just one seat.

In the 64-member Vijayawada Corporation, the YSRCP was racing ahead by winning 18 divisions while the TDP bagged five divisions.

In 57-member Guntur Municipal Corporation, the ruling party swept the polls by winning 44 seats. The TDP managed to win nine divisions while the JSP bagged two.

All eyes are on Vijayawada and Guntur Corporations as the results would virtually be seen as a referendum on the contentious state capital issue.

The TDP sought the votes in these corporations to reject the YSRCP government's move to trifurcate the state capital Amaravati.

The YSRCP also swept the polls in Chittoor, Tirupati, Kadapa and Ongole Corporations and had a clear lead in Vizianagaram, Machilipatnam and Anantapur Corporations.

As the results and trends from across the state show a clear sweep by the the YRSCP, celebrations broke out at the party's office at Tadepalli in Amaravati. The party workers burst crackers, distributed sweets and danced to drum beats to celebrate the victory.

Counting was not taken up in Eluru in the west Godavari district on the orders of Andhra Pradesh High Court.

Chief Electoral Officer, Ramesh Kumar, has directed the poll officials to complete the counting process by 8 p.m. He asked the collectors to order re-counting in divisions where the margin of victory is in single digit.