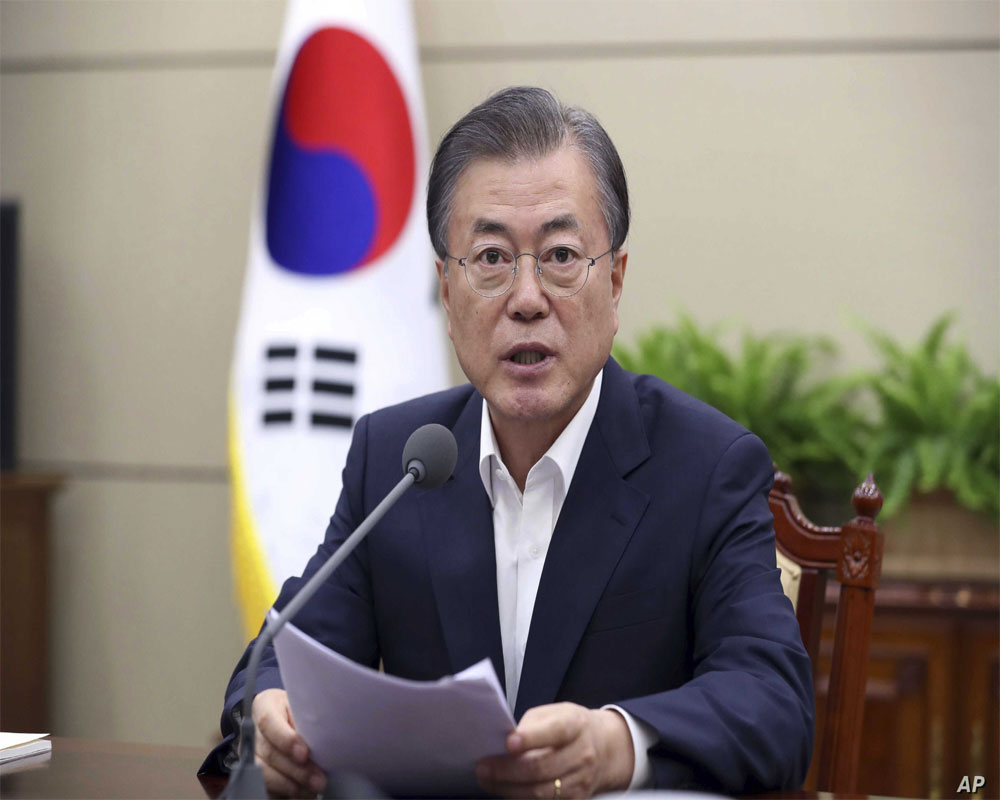 South Korean President Moon Jae-in said Monday that his government is eager for talks with Japan to improve relations following years of bitter feuding over historical grievances, adding that those unresolved issues should not stand in the way of developing “future-oriented” ties.

“There have been times where issues of the past weren't separated from those of the future and became intermingled with each other. This has impeded forward-looking development,” Moon said in a nationally televised speech commemorating the anniversary of a 1919 Korean uprising against Japanese colonial rule.

“The Korean government is always ready to sit down and have talks with the Japanese government,” he said.

South Korea and Japan have been struggling to repair relations that sank to their lowest point in decades in 2019 following South Korean court rulings that ordered Japanese companies to pay reparations to Koreans who were forced to work in their factories during World War II. Those rulings led to further tensions over trade when Japan put export controls on chemicals vital to South Korea's semiconductor industry.

Another sticking point in relations is the issue of Korean women who were sexually enslaved by Japan's wartime military, with survivors denouncing the Japanese government for refusing to accept legal responsibility for their slavery.

Japan has insisted that all wartime compensation issues were settled under a 1965 treaty normalizing relations with South Korea and it has reacted angrily to South Korean court rulings saying otherwise. There is a risk for further deterioration of the relationship if South Korean courts eventually order the liquidation of local assets of Japanese companies that have refused to compensate forced labourers.

While Moon said Seoul will continue to support Korean victims of Japanese wartime atrocities, he stressed that the countries “must not let the past hold us back.” Moon said improved relations would also benefit the three-way cooperation between South Korea, Japan and the United States, which Washington sees as crucial to dealing with regional issues such as North Korea's nuclear arsenal and China's increasing economic and military might.

Moon expressed hope that this year's Olympics in Tokyo could provide a stage to renew international efforts to resolve the nuclear standoff with North Korea.

Seoul has placed much of the blame for bad relations with Tokyo on Japan's hawkish former Prime Minister Shinzo Abe and has hoped that his resignation for health reasons last September could be a diplomatic turning point.

Another notable change came in Washington, where President Joe Biden has signaled a shift from Donald Trump's “America first” approach and his foreign policy team includes major proponents of dealing with North Korea and China through cooperation with Seoul and Tokyo.

Leif-Eric Easley, a professor of international studies at Ewha University in Seoul, said Moon may have felt that American pressure to reconcile with Japan was coming and he wanted to appear as the “reasonable” ally by offering the first olive branch.

The key now will be whether Japanese Prime Minster Suga Yoshihide responds to Moon's comments with a positive gesture to start a "virtuous cycle,” said Easley.