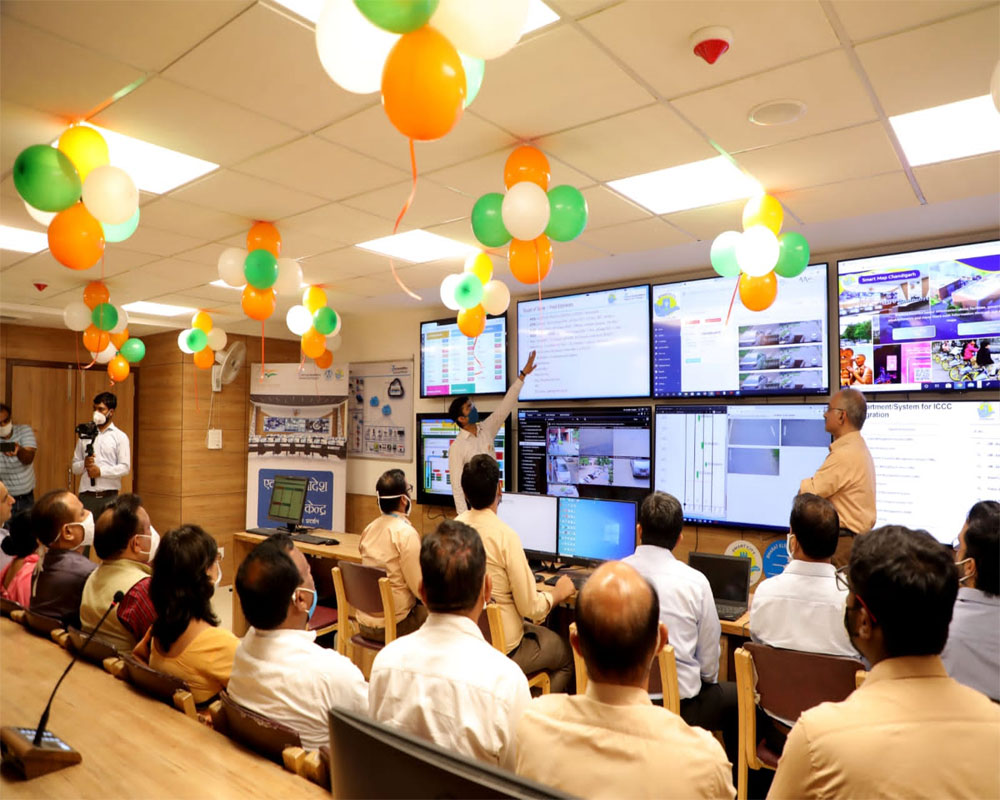 To mark the glorious history of its people, culture and achievements, the Government of India announced the initiation of Azadi Ka Amrit Mahotsav, to celebrate and commemorate 75 years of progressive India. It will also focus on India’s vision, aspiration of India’s youth and what India will be in the next 25 years.

This celebration is steadfast to the people of India who have not only been instrumental in bringing India thus far in its evolutionary journey but also hold within them the power and potential to enable Prime Minister Modi’s vision of enabling new India, fuelled by the spirit of an Atmanirbhar Bharat.

In accordance with the nation-wide celebrations for the Mahotsav, the Municipal Corporation of Chandigarh conceived a week-long urban campaign from September 28 to October 3, 2021 under the aegis of the Ministry of Housing and Urban Affairs (MoHUA). The Azadi Ka Amrit Mahotsav celebrations at Chandigarh focussed on citizen participation and engagement, for transformation into a Janandolan, a citizens’ movement, where small changes, at the community level will translate into significant changes at city level and consequently enlarging gains on the national canvas.

The physical transformation involved construction of a public toilet, painting of the water body into an interactive play area for kids, connecting neighbouring school with the park through a tabletop crossing, repair and painting of planters among others. To ensure public participation, events like morning yoga session for locals, a game of kabaddi for men and women, a drawing competition among school-going children, plantation drive at Herbal Garden, tug of war for children, officers and councillors, a magic show and puppet show for children, various quizzes, antakshari and camel ride were organised.

The Implementathon witnessed participation of more than 10,000 people from the vicinity. The key aim behind choosing New Indira Colony for the event was to promote urban vivacity to areas on the outskirts of the city which inhabited the marginalised and economically weaker section community.

Kale Ram, a safai karamchari was appointed as the brand ambassador of Swachhta Mission in the city and various awareness and sensitisation activities through skits and nukkad-natak on waste segregation at source were organised on September 29, 2021. Colour coded waste collection compostable bags were distributed to citizens at Maloya, Ram Darbar and Maulijagran.

Municipal Corporation of Chandigarh, in a special maintenance drive during this period, revamped 26 public toilets throughout the city which were handed over to Resident Welfare/Market Associations and other operating agencies by the respective area councillors in their wards in the presence of municipal officials on September 30, 2021. A new toilet block in Sector-17 was inaugurated by the Mayor of Chandigarh.

Keeping in mind the input from citizens, a QR code for getting feedback from the public on amenities were also affixed to the revamped toilets.

The Cycle2Work campaign aims at getting people out of their cars and convincing them to shift their daily habits in favour of a more sustainable and healthier commute.

Leading by example, the officers and employees of Chandigarh Smart City Limited and Municipal Corporation of Chandigarh cycled to their workplaces on October 1, 2021. Badges were affixed to encourage the employees and a selfie frame was installed in the office premises to create a buzz around the concept.

A special event was also conceived to felicitate city based waste entrepreneurs who have demonstrated state of the art models prepared out of waste by the Mayor of Chandigarh.

To empower citizens with knowledge about the ‘smart’ initiatives being taken up in the city, the Chandigarh Smart City Ltd team demonstrated the ICCC platform with integrated traffic control system, e-challan system and live monitoring by surveillance cameras to the public.

A live demonstration on the functioning of ICCC was given to councillors, media representatives and students on October 1, 2021 and a video presentation on ICCC and other initiatives of CSCL was given to citizens on October 2 and 3, 2021, at Municipal Corporation premises and Sector 17 Plaza respectively.

While commemorating the 152nd birth anniversary of Mahatma Gandhi and his vision for sanitation, this event was held on October 2 and 3.

During this event, 5150 safaimitras were felicitated. On October 2, the Mayor of Chandigarh felicitated the safaimitras and in the closing ceremony, felicitation was done by Banwari Lal Purohit, Punjab’s Governor and Chandigarh’s administrator.

A 7.5 km long bicycle rally was organised to wrap up the celebrations of the 75 glorious years of India’s independence. The rally was flagged off by Banwari Lal Purohit at Sukhna Lake. The rally witnessed massive participation from the cycling enthusiasts of the city. The highlight of the event was the sheer diversity of the participants in terms of gender and age-groups. The rally ended at Shanti Kunj, Sector-16 where the ‘junior bicycling champions’ were felicitated by Anindita Mitra, commissioner of the Municipal Corporation Chandigarh and CEO of Chandigarh Smart City Limited.