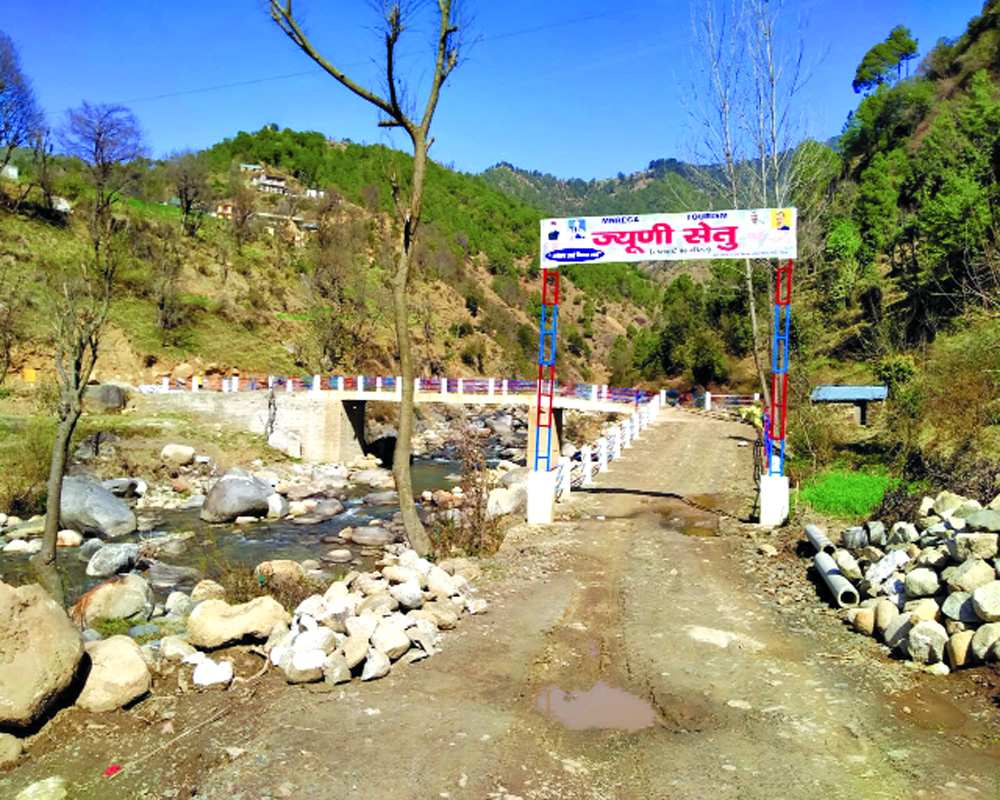 Villagers witnessed the transformation brought about by link roads in Shalla Gram Panchayat and hoped that a similar development would touch their lives, says Sarita Brara

Chalhan is a nondescript hamlet located one and a half kilometers from the main road in Shalla Gram Panchayat of Gohar block of Mandi district in the hilly state of Himachal Pradesh. Agriculture is the main source of livelihood for the residents of this village who own five to seven bighas of land on an average. Till two years ago, the village did not have a link road and was considered a major development challenge by its inhabitants.

Anybody who fell sick had to be taken on a chair or charpoy (cot) by at least four men to the main road from where they could be taken to the nearest hospital. The farmers had to hire ponies for carrying their produce to nearby markets. It became a tedious task, especially during the monsoon. The tough, hilly twisted trails become muddy, slippery and risky to commute. The government’s commitment to work towards connecting rural India, the long-standing demand of the villagers for the link road finally materialised two years ago.

“The link road has transformed our lives,” says Purnanand, a resident of the village. Now the pickup vans and ambulances can easily come on this road which is connected to the state highway. “We are now able to save money that we used to pay for hiring ponies. Sometimes our vegetables would perish or we had to sell them at throw away prices. Now we can sell them at a much higher price because of which our income has gone up,” shares Purnanand.

This is the story of every household in 35 small and big villages in Shalla Gram Panchayat. All these villages have been connected by link roads to their main road heads for transportation. A single household hamlet of Jeyog too was connected via a link road one year ago.

Hetram recalls the day his mother fell sick. He had to wait for a day to get help from men from nearby villages to carry his mother to the main road from where she was taken to the hospital. They carried her on a chair on the steep path on hilly terrain. It took them almost an hour to cover the small distance. Overwhelmed by the Panchayat’s concern,

“It took almost five years to connect every single village and hamlet in all the seven wards of this Gram Panchayat with road heads,” informs Raj Kumar, the Panchayat Pradhan. The last village that was connected by a link road was a few months ago in November 2020. Shalla Gram Panchayat is indeed a remote area of Mandi district tucked away in a difficult mountainous terrain. The process to get these link roads was equally difficult.

“It wasn't easy at all - making rounds of the concerned departments for sanctions and clearances, pleading villagers to part with their land for the sake of the convenience of all others. One has to apply every method from cajoling to counselling to get consent for using their land for the benefit of the villages otherwise everyone in the village has to struggle,” says Raj.

The roads have undoubtedly changed the lives of the villagers. Many farmers in these villages are today earning a decent income by growing cash crops like peas and other vegetables. This wasn’t doable earlier because of the fear that their produce will perish before it could be transported to the market. Another constraint was the money required to be paid for the ponies which cost them a lot.

The construction of a 16-kilometer-long road has solved connectivity issues of a population of over 1,000 people in five villages. It has given a boost to tourism as it connects them to a famous temple. This road has also been metaled. With lakhs of people travelling here, opportunities for employment have opened up. The Gram Panchayat has also been able to increase its revenue from parking fees for the vehicles.

For Udham Singh, a resident of Village Chatti, it is a matter of envy as his village is located on the boundary of Shalla and Tulna Gram Panchayat. A home guard with agricultural land, Udham has been running from pillar to post to get a link road sanctioned for his small village but has not been successful in his endeavors so far.

“My village, with nearly half a dozen families, is approximately five kilometers from the nearest road head. Since my village does not fall under Shalla Gram Panchayat, they can’t construct the road from their allotted funds,” shares Udham Singh.

The challenges of this village are also the same. The health and transportation of agriculture produce are the main concern of the villagers here as well.

Connecting villages to road heads in this state, especially in extremely remote and hilly terrains is a tedious task. Getting clearances, especially for the villages that come under forest areas is not that easy, carving out roads through mountains is time consuming, costly and difficult.

According to the information available on the official website of The Public Works Department (PWD) of Himachal Pradesh government, 6,948 out of its 17,449 villages were not connected by road till the end of October 2020, which means that nearly 40 per cent of the villages in the state were not connected. Their challenges are endless. Monsoon and winter become even more difficult due to the lack of connectivity. Seeing how the lives of inhabitants of Shalla Gram Panchayat has been transformed through these link roads, villagers of other remote regions are full of hope that soon their prayers will see the light of day.