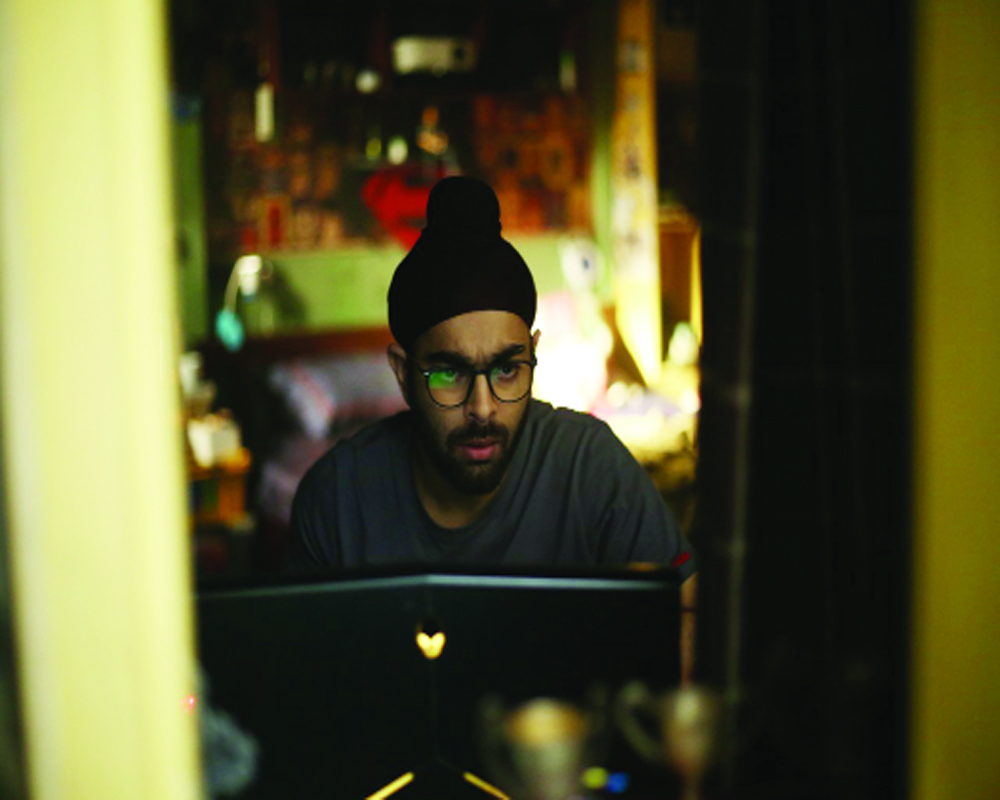 Actor Manjot Singh tells Christy Varghese that creating reactions, in the absence of co-stars, was a challenge during the shooting of the new series

Say Manjot Singh, and most of us would be at sea. But say Lali, and the audience would perk up immediately as they recall the popular character that Manjot played in Fukrey and Fukrey Returns. He returned with Chutzpah, the web series, which was released on SonyLIV yesterday.

His entry in Bollywood is in itself a filmy story. Before starring in films such as Udaan and Student Of The Year, Singh made his debut as the boy who grows up be the super-chor Lucky, in Oye Lucky! Lucky Oye! Born in Delhi to a Sikh family, he went to audition for Dibakar Banerjee’s film without having ever acted before, even in school plays. After the audition, while the casting director rejected him for the role of little Lucky, Dibakar insisted, later saying, ‘Even though the casting director wasn’t convinced, I just put my foot down.’ It turned out to be an incredible call, as Singh went on to receive rave reviews for his performance in the film.

The actor, who was in Mumbai, initiated the telephonic conversation with the fair warning that as much as he would like to divulge spoilers and other details about Chutzpah, he can’t. While the professional in him would not share something he should not but, the other part was that, he was yet to watch the show. Naturally, what he was able to talk about centred around his experience. “For a major portion of the shooting, which wrapped up in January this year, I was by myself on the set created for my character. It took me some time to get my head around the way we shot for Chutzpah. You might be aware that the series follows five stories, which are interconnected by the internet. Most of my bit involves me being by myself, in front of my computer, in the set created for the show. From an outsider’s perspective, I was really intrigued by the trailer. While I am aware of the finer details concerning the story revolving around Rishi, my character in the series, I cannot wait to watch the whole thing as soon as it is released,” shared Singh.

His account tickled our curiosity and we asked him how strenuous was the experience of shooting for something as unconventional as Chutzpah? “I have been working in this industry for over 12 years now and I believe this was the most challenging project that has come my way. On the first day of the shoot, I could not really understand the process that was underway; you could very well say that I was clueless. I had a tough time dealing with the fact that I did not get to interact with my co-actors for a major chunk of the production. For scenes in the series, where I am shown interacting with someone via my computer, their lines were read to me and I cannot explain how difficult it is to respond to someone else’s dialogue when they are not around. The reactions that come naturally, by responding to someone else’s dialogue, or before and after your own dialogue had to be consciously expressed. It was extremely challenging to create those reactions by way of imagination, and you would get tired of counting the retakes we did," he chuckled.

“All in all, production was a painstaking process. But that is a part and parcel of life. If you want something worth cherishing, you have to pour every ounce of your being into it. I would say shooting for Chutzpah was like climbing a mountain. With time, I got used to it. From the second day, I got a hang of the technicalities. I was pretty nostalgic on the last day of the shoot. I had grown attached to the house (set) that was created for me. I had made it my own. I recall lying on the bed at the set after we were done shooting my bits. While another set alongside mine was lit up, the lights were switched off on mine and I remember feeling numb thinking that since we are done with the shoot, this will be the last time I get to lie down on this bed and this set will probably be dismantled tomorrow. I had grown extremely attached to the home that was created for me and I don’t remember ever being this close to a set, before,” Manjot ruminated.

When we ask him for more information about his character, Rishi, he unabashedly obliges us. “He is very naïve. Humble and down to earth, he is under the misconception that just because he is a nice person, everyone else is as good and helpful as he is. As the story progresses, little by little, that perception is corrected. He realises that the world bears a stark contrast to how he pictured it and it is a coming of age experience for him to understand that no one, barring a few exceptions, will support you in this world. He wants to bare his heart to someone he likes but he lacks chutzpah and hence he has some trouble communicating his feelings. He goes on to meet an online camgirl, Wild Butterfly, portrayed by Elnaaz Norouzi, who provides some abstract guidance, of sorts. You have to witness how he goes on to gain some chutzpah which changes his life,” he expressed.

We ask Manjot for his take on the internet, whether it is a curse or a boon, and he said, “I think just about everything has its pros and cons. In moderation, everything is good. Frankly, I feel that the advantages outweigh the disadvantages. But those disadvantages are potent and can ruin someone’s life. Talking in particular about social media, we all know what trolling is and it has also been represented in the show. Now, while at face value it might be disregarded but it may result in a chain reaction of sorts which may lead to some serious consequences. I believe that is partly why people subconsciously choose to not reveal their real selves on social media. However, once again, the advantages cannot be ignored. We all have seen how the internet proved to be a lifesaver for scores of people against the backdrop of the pandemic, earlier this year.”

He went on to highlight that the series is something worth your while. He laughed as he said, “I know everyone keeps raving on about how good their show/film is but have you seen the trailer? While it might seem somewhat amusing, I would say Chutzpah is an incredible social drama and the trailer serves as a wonderful teaser to what’s in store for viewers. Well, while I haven’t seen the series, I can vouch for it since it is directed by Simarpreet Singh sir and written by Mrighdeep Singh Lamba, who also wrote Fukrey. Additionally, the work done by the DOPs, Amit Babbar and Gianni Giannelli lent a Black Mirror-esque feel to the trailer. Chaa jayega ye show, you wait and watch.”

Manjot shared that he is just as eagerly waiting for the third part of Fukrey, but it all depends on the impending third wave of the pandemic. “Just like the fans of the franchise, we too are waiting for the film to get a little better before we start working on it. We believe we will start shooting sometime next year. Additionally, I have another unnamed project which might commence shooting before Fukrey,” he disclosed, as we wrapped up the conversation.

We just have one question for you. Were you also watching Chutzpah with Manjot Singh yesterday?