One step towards goodness

One step towards goodness 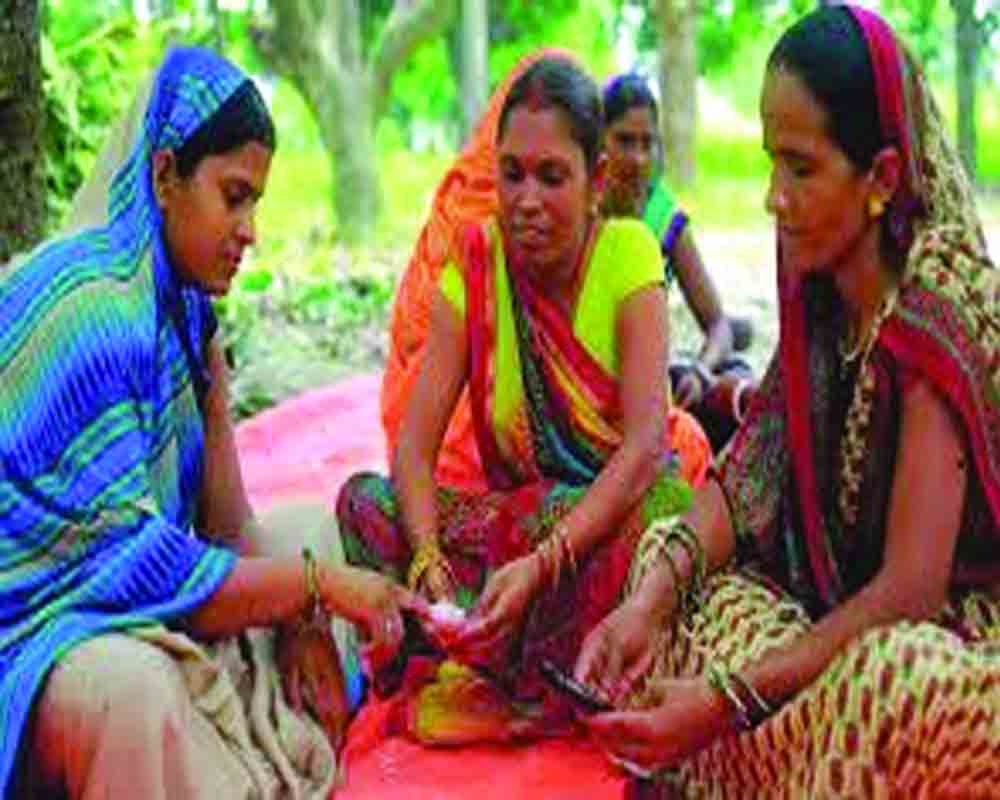 Bank Sakhis travelled to the hinterlands to provide banking facilities to the villagers, thus, ensuring their financial inclusion during the lockdown. By Suryakant Dewangan

There are several inspiring stories of Covid-19 warriors from across the country that have helped society to overcome the hardships brought by the pandemic. This story is about the ‘Bank Sakhis’ from Kanker district in Chhattisgarh, who travelled far and beyond to provide banking facilities to the villagers and ensured their financial inclusion even during the lockdown.

The Chhattisgarh state government has been running the Bank Sakhi model under the National Rural Livelihood Mission (NRLM), in which rural women, preferably from Self Help Groups (SHGs), are provided training to open bank accounts for SHGs, to assist transactions of different pension schemes like old-age pensions, widow pensions, social security pensions, and to facilitate credit linkages of these groups and other banking facilities. When the rest of the world was afraid to leave their houses, these Bank Sakhis were out there bringing banking services to the doorsteps of villagers.

Residents of isolated villages often find it difficult to avail banking services as the banks are often located in towns or cities at considerable distance. During lockdown, it had become even more challenging for the communities from low socio-economic background to avail benefits of government schemes which have turned digital in the recent years. It were the Bank Sakhis who came to the rescue of the rural communities.

Working as a Bank Sakhi in and around Murumtara village of Narharpur tehsil in Kanker, Sarita Katendra said, “Earlier, I would sew clothes for a living, but it wasn’t enough to make ends meet. Being a member of the SHG, however, provided me an opportunity to work as a ‘Bank Sakhi’. Currently, I am earning around ` 8,000-10,000 per month.” Sarita is now known as the ‘Bank Lady’ in her village. Any woman who has completed education till class 10th is eligible to become a Bank Sakhi. After the selection, they are provided with basic computer knowledge and banking skills. Once they start working, they receive an honorarium through banks.

“I was always interested in the banking sector but owing to my poor financial background, I was unable to make a career out of it. As I was a member of an active SHG, I applied for the role and have been working as a Bank Sakhi since May 2020,” shared Poonam Jain from Madabharri village in the same tehsil which has facilitated transaction of over ` 30 lakhs so far. According to her, with every transaction, the Bank Sakhis receive a commission through which they are able to earn around ` 8,000-10,000 every month.

Last year, when livelihoods were greatly affected due to the nationwide lockdown, Bank Sakhis went from door to door to provide beneficiaries their pension, MGNREGA payments and any incentive received during that period.

“I work in the Bhanupratappur area in the villages of Dumarkot, Bhainsakanhar and Narsinghpur. During the lockdown, we transacted ` 30,000-40,000  every day,” informed Nimita Dhruv, another Bank Sakhi from Dumarkot village in Bhanupratappur.

Working as Bank Sakhis has also strengthened the economic condition of these courageous women. “I use the honorarium I receive working as a Bank Sakhi for my college expenses and to financially support my family,” shared Dipika Bhuarya who works at Baansala and Junwani village. She added that ever since she started working as a Bank Sakhi, people seek her support to withdraw or deposit money from their account. The initiative has proved beneficial to both Bank Sakhis and villagers who are saved from undertaking long travels to access banking facilities.

Bridging the gap between banks and the rural areas, the Bank Sakhis appointed by different banks have emerged as a viable alternative for ensuring financial inclusion of the remote communities. Different types of Bank Sakhis have been appointed under this scheme.  The Banking Correspondent (BC) Sakhi has a laptop and a printer to conduct banking transactions and even open a bank account. The ATM Sakhi has a swipe machine through which she can only transact, whereas the DIGI-Pay Sakhi has a mobile phone through which she can conduct transactions. She can process transactions from those accounts that are linked to Aadhaar without filling any forms.

Several government and private sector banks are operating in the Kanker district, but Chhattisgarh Grameen bank has maximum reach and also, the highest number of branches. This is why a greater number of Bank Sakhis are associated with the grameen banks. Currently, there are 113 Bank Sakhis working in all the seven blocks of Kanker district—16 in Narharpur, 22 in Charama, 17 in Kanker, 12 in Bhanupratappur, 14 in Durgukondal, 15 in Antagarh and 17 in Koyalibeda. Through the scheme, the BC Sakhi and ATM/DIGI-Pay Sakhis receive an honorarium of ` 2,500 and 1,000, respectively, and additionally earn commission from the bank based on transactions. They are linked to the nearest branch which provides them cash to conduct these transactions.

As expressed by Ravi Kumar Gupta, the Financial Institution (FI) manager of Chhattisgarh’s regional office of grameen bank in Dhamtari, the selection of Bank Sakhis is done through the corporate business correspondent. “While the village panchayat also plays a role in selecting the candidates, preference is given to women associated with a SHG. Besides their designated tasks, they have been given responsibility of additional tasks such as insurance, loan recovery and KCC during the pandemic,” said Ravi. Currently, 90 Bank Sakhis are a part of grameen banks in Kanker district.

During the last financial, despite the lockdown, 113 Bank Sakhis from Kanker district have carried out transactions of approximately `10 crores, ensuring financial assistance to the people and, at the same time, strengthening their own economic status while building an identity in their respective regions.