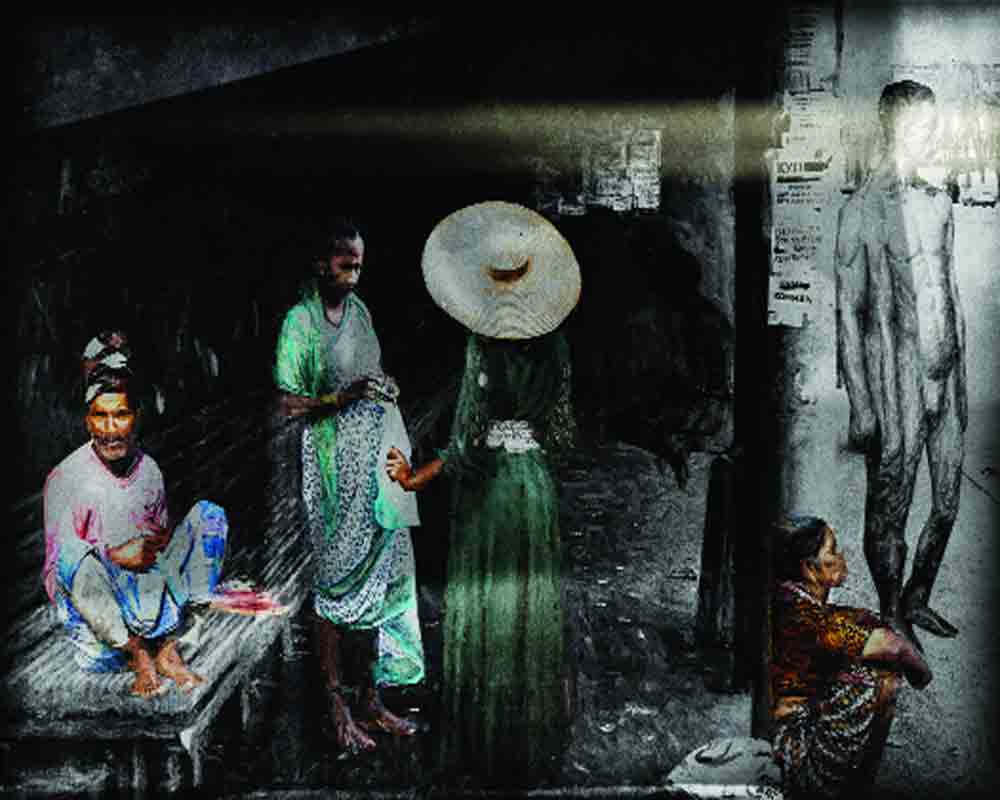 The concept of ‘womankind’ has evolved over time. While generations across the world have defined feminine attributes sensitively, several women have shattered the glass ceiling to reconstruct the idea of feminism. Santosh Jain, who began her career in 1971 as a young printmaker, strongly showcases the beauty of women through her art. Baring her heart during a telephonic conversation, she shares that she has observed how the vulnerability of women has remained unchanged over the years.

Her signature artistic style in the section of the digital landscape, the Solitude series talks about how women as a group suffer through loneliness. “There are numerous positive and negative aspects of womanhood. For a mother or a wife, it is delightful. Womanhood is beautiful, but if she is a silent sufferer then it is an absolute nightmare,” she said. However, she added, “Today, women are educated, as they have put their foot down for their rights. However, I strongly feel that the underlined story has remained unchanged, or maybe I am wrong.”

Distressed over the suffering of women, she feels empathetic over the pitiful circumstances that women are facing. “In the smallest village of Punjab or some other remote sections, I always see women suffering. I got sympathy and empathy with women; they are bread-winners, homemakers, who are suffering silently” she expressed.

Considering her work as the second language she shares her stories and her innermost thoughts. Looking back, she says, “I was a carefree self, least bothered by what is happening behind my back. I used to enjoy every small moment.” On being asked about what has changed, she realises, “Today, I am a mother and I overthink everything, and maybe I am a storyteller in my painting. I have started assuming a lot of less relevant things.”

Her artworks are recognised extensively in prestigious artist associations — Group 8, Shilpi Chakra, Lalit Kala Akademi, Bombay Art Society, and All India Fine Arts & Crafts Society. Her family has always encouraged her to pursue her passion for the arts. Referring to her three beautiful daughters, she happily expresses, “My children are lovely. They know how I have brought them up, they feel it but they don’t say it, but they try their best to help me out with my passion. They say that now it is my moment, I should feel free and do my artwork the way I want. They are always standing behind me, all three daughters, including my sons-in-law.” Her creative ideas pop up out of nowhere. “Sometimes, maybe at 2 am, I get an idea and start working on it. Even if, I leave watercolors, or a painting; I get up, and look at it in the morning”, she says thoughtfully.

Reflecting on how life has changed over the years, she chuckles after a long silence and talks about being slightly judgmental. She says, “There are some positive and negative changes in my life. Like I told you, when I was young, I was carefree and least bothered about kisne kya kaha, kyu kaha, and kaise kaha (who said what, why, and how someone can say like that). Now it hurts me if someone says, maybe I have reached a stage where I have decided that I am not going to get affected by anyone. But I am not going to harm anyone intentionally. That’s the motto of my life.”

Her love for photography never faded out. During her lockdown phase, she was engrossed in watercoloring but currently, she is engrossed in her digital artworks. To young artists, she advised all to have patience. She says, “We used to have a lot of patience and we would look up to our teachers. Today, I see that students start drawing in the first week, but instead of finishing their artworks, they seek something new. The young generation has little patience in the fast-moving world. I feel that the base needs to be stronger, if you want to become an artist. If you have a goal, keep looking at the goal and hit the bull’s eye.”

After studying arts for five years at Delhi College of Arts, she went to Amsterdam for two years. She expresses, “I went for a scholarship to Holland for two years. Life went on, even though, I got a job, but my family was my priority. Later on, I went for art education, I went to the college of arts as a visiting lecturer and then I got a job in DPS Vasant Kunj. Then, I started loving art education like anything.”

She conducted solo exhibitions in Paris and Amsterdam. Additionally, she exhibited her artworks in several group shows in New York, Australia, the UK, and India. The Cultural Department of  Netherlands recognised her as an exceptional artist before she returned to India.