‘Militiestablishment’ and the wary Sharifs

‘Militiestablishment’ and the wary Sharifs 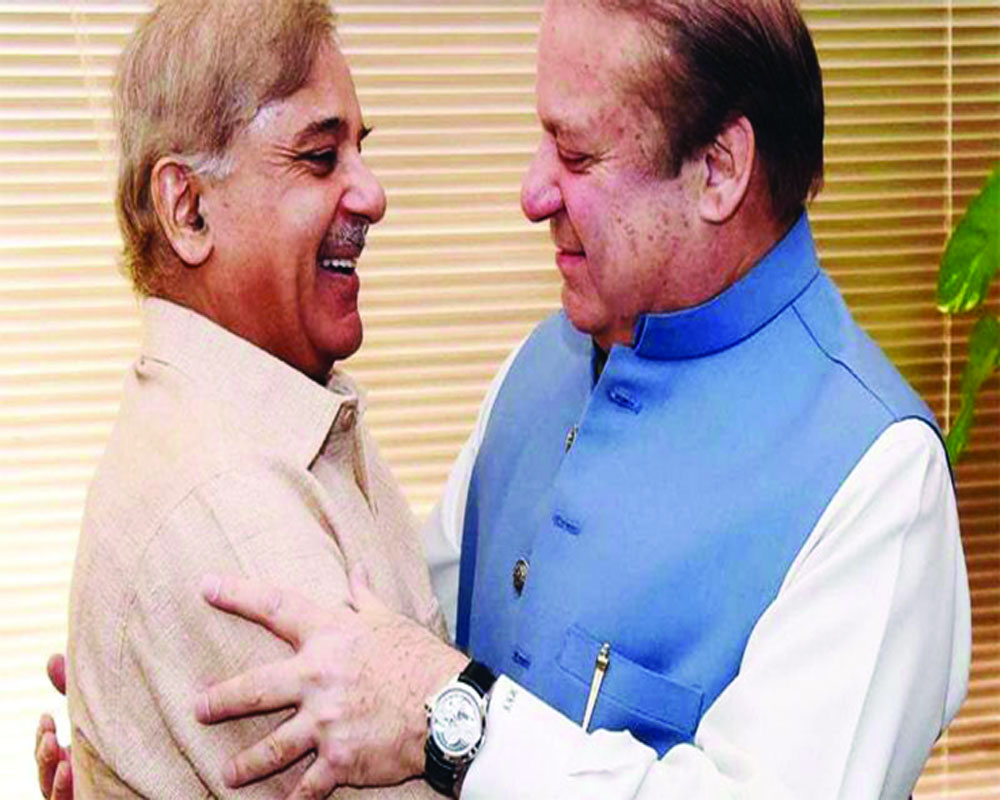 In the Pakistani cloak-and-dagger system under the broody shadows of the military establishment, no one is permanently good or bad

A few years back, counterinsurgency expert David Kilcullen had painted a doomsday scenario: “Pakistan is 173 million people, 100 nuclear weapons, an Army bigger than the US Army, and Al-Qaeda headquarters sitting right there in the two-thirds of the country that the Government doesn’t control. The Pakistani military and police and intelligence service don’t follow the civilian Government; they are essentially a rogue State within a State.” Minor deviations from the prophecy notwithstanding, the precarious situation in Pakistan with its eponymous ‘Militiestablishment’ (Military ‘Deep State’) holds largely true. The Pakistani Generals have just tripped their erstwhile protégé, Imran Khan Niazi (who prefers not brandishing the ‘Niazi’ bit, owing to infamy associated with Lt Gen AK ‘Tiger’ Niazi)! As the Generals simply disowned Imran during the no-confidence saga with their combination of silences, contradictory statements and ostensible neutrality, a desperate Imran was left beseeching “only animals remain neutral”! Once ‘selected’ (not necessarily ‘elected’), Imran was sacrificed by the same institution of the Pakistani Army, just as it did earlier to all other civilian politicians of different partisan persuasions, without exception.

Imran is not done politically as he would still command a certain mass loyalty in the face of the barely credible alternatives in PML-N, PPP or even in Maulana Fazal ur Rehman — but he faces an insurmountable challenge for now, ie, ‘Militiestablishment’. This institution is beyond simplistic aspersions, popular passions or ideological affiliations as it is purely a self-defensive product of situational requirements which can easily deploy seemingly contradictory or even counter-intuitive instincts to protect its own relevance. Increasingly preferring to control the reins from the shadows (Gen Musharraf last held national leadership position in 2008), the fine art of pulling puppetry strings is critical. Whenever the ‘redlines’ defined by Rawalpindi GHQ were breached by the civilian dispensation of the day, the alternatives in the Opposition ranks found themselves galvanised by what Nawaz Sharif once called ‘Khalai Makhlooq’ (invisible aliens or angels). Clearly, Imran got carried away by his own cult and was seen questioning the ‘Militiestablishment’, and assuming himself to be an equal of the Generals — a cardinal sin with unpardonable consequences in the narrative of the powerful ‘Militiestablishment’. Ironically, the recent beneficiary of the meddlesome ‘Militiestablishment’ was none other than Shehbaz Sharif, the brother of Nawaz Sharif, who holds the fort on behalf of his presumably relieved (though wary) brother in London. The wily and the longest serving Prime Minister of Pakistan (3 non-consecutive terms), Nawaz would know about the ways of the ‘Militiestablishment’ — he was after all the product and victim of the same.

Gen Zia-ul-Haq had inducted a young industrialist, Nawaz Sharif, into the Punjab Cabinet as Finance Minister in 1981 (Chief Minister by 1985). The ‘Militiestablishment’ post-Zia’s death punted on Nawaz’s then Islami Jamhoori Ittehad (IJI) and ‘helped’ him (Supreme Court ruling later confirmed that IJI was created by ISI) become the Prime Minister by 1991. The young and overambitious Nawaz Sharif had perhaps succeeded too soon as he showed recklessness and impatience with the power structures — soon, his handpicked Army Chief, Gen Waheed Kakar, ensured the dismissal of the Sharif Government by 1993. In his second coming, Nawaz was defter in easing out Army Chief General Jehangir Karamat prematurely, and thought he had made a masterstroke with the out-of-turn selection of a ‘safe’ Mohajir ie, Gen Pervez Musharraf. Famously, history repeated itself, and his handpicked Gen Musharraf deposed Nawaz in the 1999 coup. In Nawaz’s third innings as Prime Minister, he had to deal with the outgoing dictator, Musharraf’s chosen, Gen Pervez Kayani, as his concurrent Army Chief (Kayani later extended his term by three years, unilaterally)! Finally, when Nawaz did manage to appoint his own (again, out-of-turn) Gen Raheel Sharif as the Pakistani chief — Raheel turned out to be his own man who gave his Prime Minister many sleepless nights with his popularity and murmurs of ‘takeover’. Sixth man chosen by Nawaz to be Army chief was Gen Qamar Bajwa (yes, out-of-turn again!) who, instead of remaining beholden, gleefully upped the ante against Nawaz and allowed him to get disqualified — all six of Sharif’s selection of Pakistani chief’s in his tenures ultimately dumped him.

In the Pakistani cloak-and-dagger system under the broody shadows of the ‘Militiestablishment’, no one is permanently good or bad as the once-deposed (Sharifs) are the chosen ones yet again, temporarily. The defiant and wholly personalised way in which a kicking and screaming Imran has been literally pushed out of office will further infuriate the ‘Militiestablishment’ who would not want to surrender the mantle of nationalism (never mind the history of 1965, 1971 or Kargil) from itself, that too, to a man who threatened to upstage them and re-script his own importance by diminishing that of the ‘Militiestablishment’. Already the bloodied Sharif-Bhutto dynasts have changed their tune after Imran’s ouster and are now singing hosannas in favour of ‘Militiestablishment’ — they know that the Rawalpindi GHQ can swing and bestow nationalistic credentials onto whichever side seems to be doing their bidding. Imran is perhaps too brash, boastful and even vain to recognise the futility of his cavalier grandstanding, that too, in front of military Generals, in Pakistan.