Is KCR trying his hand at national politics?

Is KCR trying his hand at national politics? 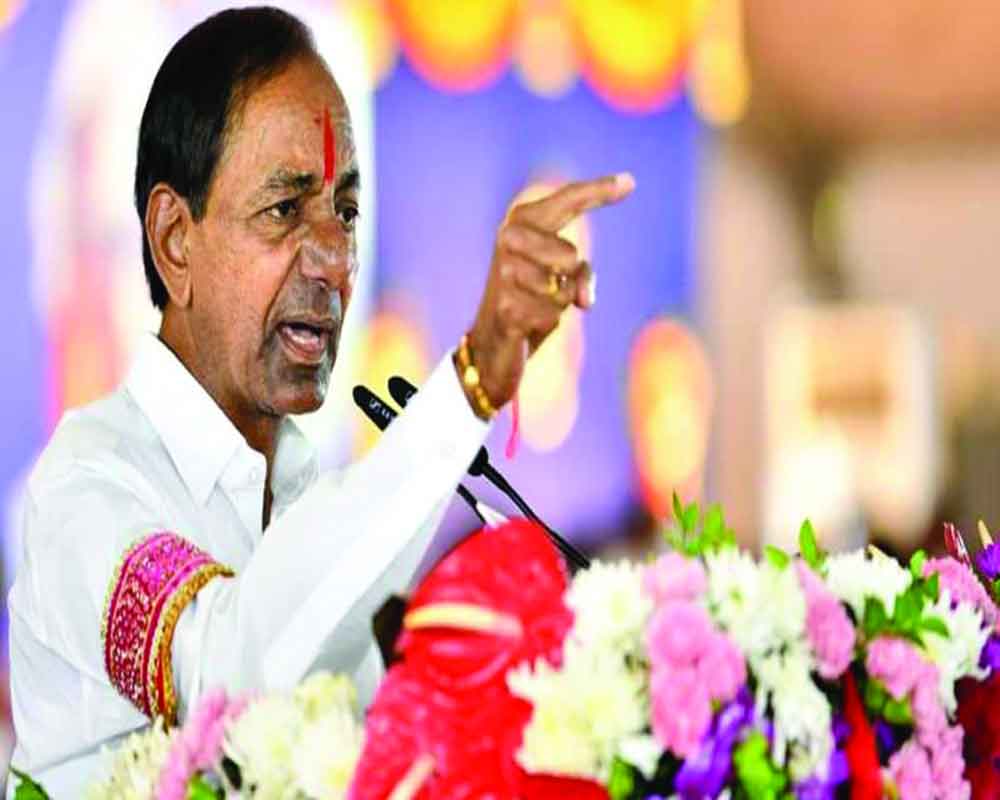 He led a statehood movement for more than 13 years and headed the Govt in the new State for seven. He is entitled to have national ambitions

After Mamata Banerjee proved that Modi-Shah combination is beatable, leaders from different parts of the country have been trying their luck to play a role in national politics. Chief Minister of West Bengal and chief of Trinamool Congress visited Delhi and Mumbai, had talks with Sharad Pawar, the eternal campaigner and never-say-die politician. She admitted into TMC some Congress leaders in Goa which is going to polls along with UP, Punjab, Uttarakhand and Manipur. She is said to be planning to campaign for Samajwadi Party in UP.  It is now the turn of K Chandrasekar Rao (KCR), Chief Minister of Telangana and founder of Telangana Rashtra Samiti (TRS).

The visit by Tejaswi Yadav, RJD chief and opposition leader in Bihar Assembly, to Hyderabad on Tuesday and the telephonic talk KCR had with Lalu Prasad Yadav, former chief minister of Bihar, were well organized. Earlier, KCR visited Tamil Nadu on a pilgrimage and he concluded his tour only after meeting Chief Minister M K Stalin where both the leaders were supposed to have discussed national politics. Left leaders who had national conferences in Hyderabad last week made it a point to go to Pragati Bhavan, the residence of the chief minister, to have a discussion on national scenario.

This is the second time KCR is trying his hand at national politics. In 2018, both KCR and former Chief Minister Nara Chandrababu Naidu were on national stage playing different games. While KCR had hired a plane and visited UP, Maharastra and West Bengal to promote a third front excluding BJP and the Congress, Naidu did his best to build an alliance around the Congress. He went to Delhi to meet Rahul Gandhi whom he felicitated with a shawl. Naidu also travelled to Kolkata and Lucknow, besides Delhi. While Naidu’s state, Andhdra Pradesh, has 25 Lok Sabha seats, KCR’s has only 17. Numbers are not in their favour. However, being in power, both had money in 2018. They were richer than the politicians in North and East. They together reportedly helped Congress, TMC, JD(S) and SP financially in 2019 elections.

KCR’s was a brief show. He withdrew when he found the going tough. Naidu stayed put till the elections were over. His calculation that Narendra Modi’s BJP would not be able to repeat 2014 performance and that non-BJP parties can form an alternative post-election alliance with Congress as the fulcrum had backfired. Naidu himself got three Lok Sabha seats and 23 Assembly seats out of 175 in 2019 while Modi had improved upon 2014. Since then, the TDP chief has been cooling his heels trying to make up with Modi. Now it is KCR’s turn to guess afresh that the Modi-Shah team is going to lose in 2024.

He has been maintaining friendly relations with YS Jagan Mohan Reddy, Chief Minister of Andhra Pradesh. KCR can count on Jagan’s support after elections. However, can a politician with just 17 Lok Sabha seats in his state hope to become a prime minister or a king-maker?  Is it overconfidence or outright gamble?

KCR, no doubt, is a crafty politician. He played his cards shrewdly so far.  He promised Sonia Gandhi that he would make his party, TRS, a partner in alliance with Congress after the latter conceded his demand for a separate state of Telangana. The only other demand he put forward was that he should be made chief minister after 2014 elections. Congress had half-a-dozen hopefuls then. While Congress was the party that delivered Telangana, TRS was the one that achieved statehood. KCR’s demand was not met and he fought the elections alone and was lucky enough to win. The rest is history.

A leader who led a statehood movement successfully for more than thirteen years and headed the government in the new State for more than seven years, is entitled to have national ambitions. More so with no leader of stature to match Modi’s available either in the Congress or outside.  His son, K Taraka Rama Rao (KTR), is ready to take over the reins to run the state administration. KCR is the only leader from the south to have publicly made moves to build an alternative front. What kind of relationship the so-called third or fourth front would have with the Congress and what would happen to Didi’s dream of being an alternative to Congress are some of the questions to which only time should answer.

Unlike Lalu Prasad and Akhilesh, KCR has not been strident in his anti-BJP discourse. He was playing safe until recently. His party supported almost all the Bills introduced by the NDA government till the other day. He started criticizing farm laws just before they were withdrawn. KCR has been vacillating in his stand towards the BJP.

KCR knows his limitations. He is aware that he does not command numbers. He also can see that the days when lightweight politicians like VP Singh, Chandrasekhar, Deve Gowda and IK Gujral could become prime ministers are over. The opposition is waiting for a leader who can match Modi in stature and articulation. KCR can speak reasonably good English and Hindi/Hyderabadi and get on in North India like PV Narasimha Rao, a polyglot, did. He can mobilize funds to an extent. But he lacks the stature of Sharad Pawar or the prowess of Mamata Banerjee as a fighter. Sharad Pawar is lying low because of his own limitations chief of which is his age. Mamata is not acceptable to leaders like Lalu Prasad Yadav and she may not be able to mobilize funds. That is, perhaps, the reason why Lalu Prasad asked KCR to take up a leadership role.

By nature, KCR is not a democrat in the sense that he does not believe in consultations before or after taking decisions. It was the case even during the statehood movement. He does not believe in collective leadership, the quality which is essential for a leader at national level to build an alternative alliance from parties headed by egotistic and ambitious leaders. It required a lot of patience which KCR does not have.

An important factor that must have prompted KCR to start his second innings in national politics is the fact that his adversaries in Telangana are not of his stature. Bandi Sanjay, BJP chief, was a corporator before getting elected to Lok Sabha from Karimnagar in 2019. The TPCC president Revanth Reddy is also relatively junior who is facing problems from seniors in Congress. Instead of a street fight with noisy juniors, KCR must have thought it is better to take on Modi, win or lose, and have the satisfaction of trying his best to make a mark in national politics. In the meanwhile, he can satisfy his family members who are keen on KTR becoming chief minister. KTR is already an important minister and working president of TRS. His cousin, Harish Rao, Minister of Finance and Health, who is a senior and capable politician, is reportedly prepared to accept the younger politician’s leadership. Can KCR take the risk of giving up the position of a chief minister for some uncertain position at national level at a future date? Will the date ever arrive?