Kaptaan Khan as the ‘Teesra’ bowler

Kaptaan Khan as the ‘Teesra’ bowler 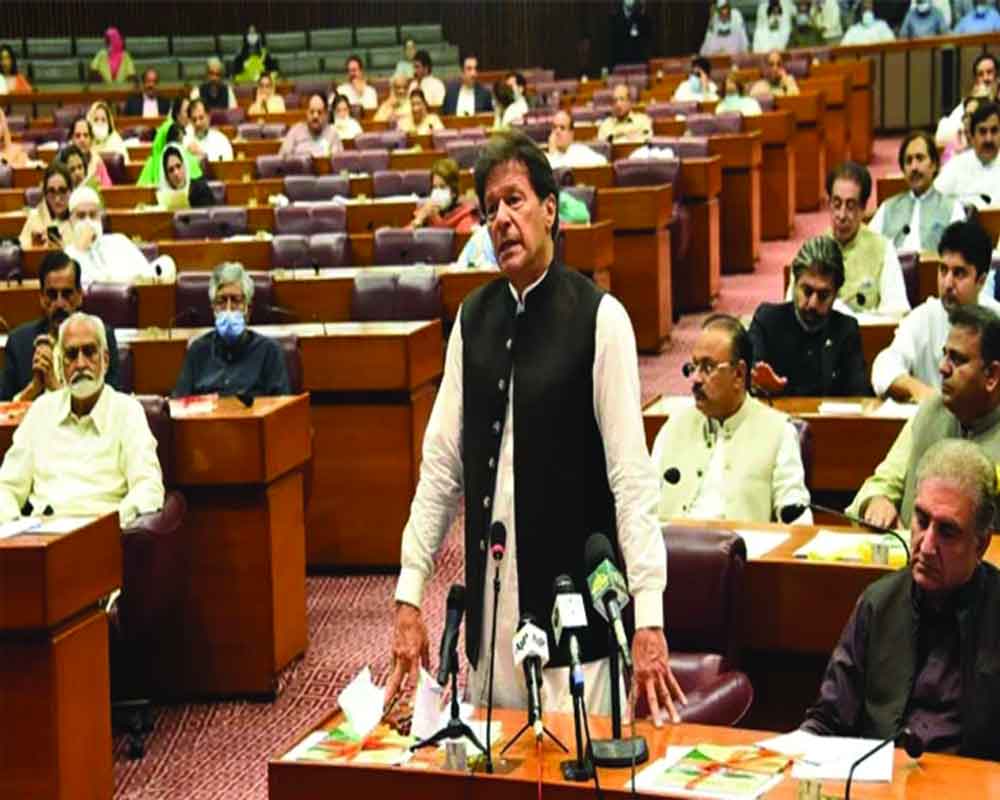 In politics, as in cricket earlier, Imran has chosen to discount fair play and ethical discharge of his duties, relying on manipulation instead

In the ‘gentleman’s game’, the batter walks out voluntarily with dignity in case he believes he is out, even if the match umpire held otherwise. The revered code of the game necessitates certain behavioural expectations like fair play, no sledging, no cheating, no swearing, unnecessary appealing or inelegant tantrums. The principal responsibility of ensuring this culture is usually onto the Captain. For all its raw talent and even achievements, Pakistan as a cricketing giant has never been known for personifying this hallowed sportsmanship, both on and off the field, if the sheer number of accusations, cases, convictions and drama entailing its players is anything to go by.

The infamous, though highly potent, ‘reverse swing’ conditionalities that the Pakistanis pioneered, many of which were eventually deemed illegal, fell short of ideal sportsmanship. Then Captain, and till very recently Prime Minister, Imran Khan, had a major role in that murky saga. On getting embarrassingly exposed and called out, Imran displayed the sort of righteous indignation that he institutionalised and deployed with much aplomb, even in the second career innings of his life, as a reckless, ultra-ambitious and unhinged politician (his ex-wife called him ‘pyromaniac’). Even in his autobiography, Imran inadvertently acknowledged using a bottle top to tamper with the ball in a match whilst still maintaining that in his eyes, it did not tantamount to cheating!

Another cardinal sin of leadership that has haunted Imran has been his unbridled selfishness, which was visible in his acceptance speech as the World Cup-winning Captain in 1992 — he spoke about himself singularly, about his pet hospital project (which would be leveraged for his subsequent political launch) and made absolutely no mention of any of his teammates. However, unlike Imran and his questionable exploits — the art of Doosra (second one) that deceives the batter into misjudging the turn, was supposedly invented by a domestic Pakistani cricketer and later popularised by international Pakistani spin maestro, Saqlain Mushtaq. This was a fair and square delivery.

Irrespective of the taint that followed him, legendary Kaptaan Imran Khan soon transited from his wild and promiscuous lifestyle towards a pious politician — a new playground that was perhaps even more suited to his personal sensibilities. The untamable quest to succeed that had propelled him into a cricketing icon was immediately visible as he straight-facedly reneged on his past life and outlook and, instead, posited an unbelievably austere and religiously inclined posture. From initially ranting against Pakistani Generals to shamelessly accepting their tactical support to get ‘nominated’ (not necessarily, selected) by the ‘establishment’ in 2018, was completely from Imran’s playbook. The westernised playboy who had once married a person from Jewish faith, suddenly discovered the wisdom of ‘Zionist conspiracies’, trust on the Chinese treatment of co-religionist Uyghurs, faith in the likes of extremist Taliban — as long as it strengthened his position, personally and politically.

With his recent back-to-the-wall status in the no-confidence motion drama, Imran kept talking about a last-minute “trump card”, akin to a mythical ‘Teesra’ (third one!) in cricketing parlance — expectedly, it turned out to be a dud and inglorious abandonment of all pretences to fair play. When defeat on the floor of Parliament was inevitable, Kaptaan Khan (more popular these days as ‘Taliban Khan’) virtually walked out of the pitch, refusing to play the mandated game and hiding behind make-believe notions of “saving the country”! All earlier bravado of “playing to the last ball” came to naught as the unsportsmanlike Kaptaan scurried sheepishly, leaving behind a bitter constitutional crisis that is bound to escalate and polarise Pakistan even deeper. The vain glorious Kaptaan’s proverbial ‘Teesra’, much like his ‘reverse swing’, was deliberately staged and manipulated with utter disregard for any sense of constitutional propriety, even by the rather lowly standards of a political field. In hindsight, it should not have surprised anyone as that sort of fickle narcissism and selfish conceit have defined Imran’s career on the cricket field and in political arena.

Amidst the unprecedented economic crisis, societal disaffection and toxic air of religious extremism sweeping Pakistan, Imran has yet again put his personal ambition before that of the nation. Instead of accepting the verdict valiantly and perhaps even emerging stronger, even in the case of a loss — Imran read the mood of the ‘dressing room’ (read, the Pakistani ‘establishment’ aka military Generals). Clearly, the telling silence from Rawalpindi GHQ and its refusal to interfere and bail out Imran (unlike in 2018) led many of Imran’s team members and allies to shift loyalties. Gen Bajwa has already made a startlingly contradictory statement, “Russia’s invasion of Ukraine was very unfortunate as thousands of people have been killed, millions made refugees and half of Ukraine destroyed” — this fits completely with the American narrative, and militates in the face of Imran’s strange presence in Russia on the eve of Ukraine attack. Clearly, the military is not enamoured with Kaptaan’s relevance anymore and he is left to “fight like a cornered tiger”, in a throwback to his 1992 speech. Except with the Americans, Pakistani military and a relatively united Opposition breathing down his neck (not to mention the court verdict on constitutional correctness of his actions), 2022 may not be 1992!