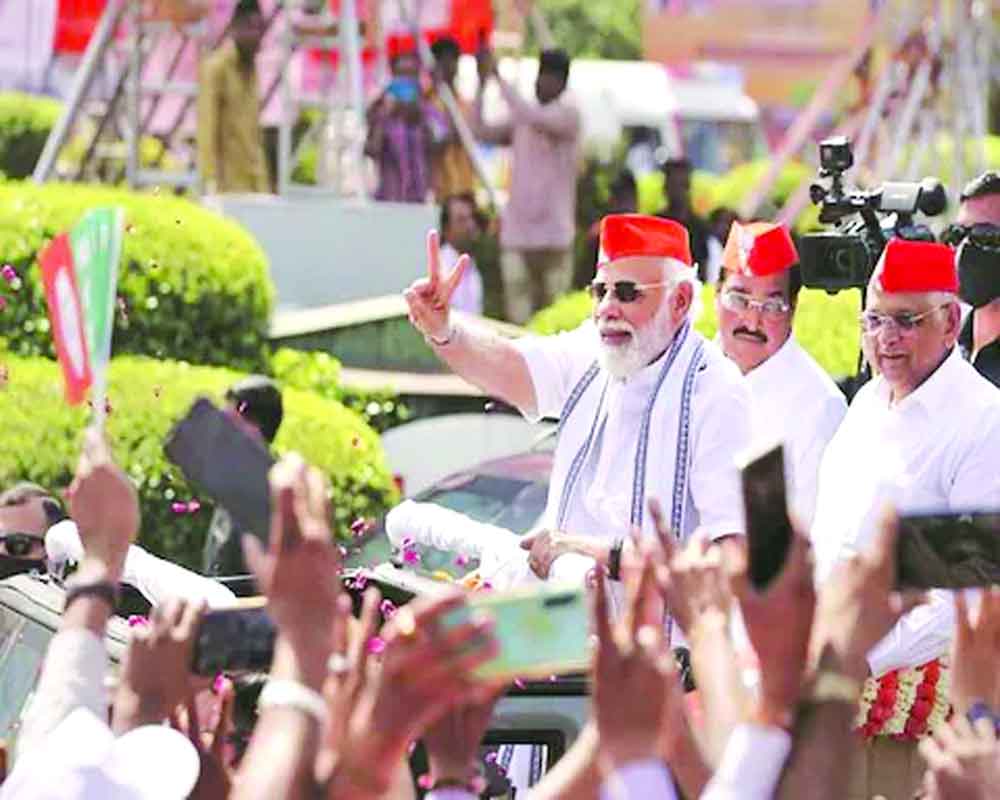 The BJP is setting goals to work continuously till India's independence centenary in 2047, riding on the strength of its strong eight-year of reign 'ensuring ease of living' for the poor and the middle classes.

The goal is set by Prime Minister Narendra Modi in his address to party workers in Jaipur and the strategy finalized for "Sewa, Sushashan and Gareeb Kalyan" campaign. The party and the government carved out an intense blitzkrieg of publicity, one-to-one contact with a view to capturing all the states that are not in its fold. Too ambitious but with 744 central schemes and 72 sponsored programmes and millions of cadre across the states it finds the task tough but not difficult.

Even the march to Dakshin - the South - is part of its yatra. Its senior leaders are carving out strategies in Chhattisgarh, Telangana and Andhra. Modi launched projects worth Rs 31,500 crore to target Tamil Nadu. The massive campaign is to make all believe in its economic feat, improvements in living standards, digital economy inclusion of the poor, a caring government for a grand success by 2024 in Lok Sabha and at least 16 states that go to the polls in the next two years.

The thrust of the BJP in government or the party would be to focus on the wider benefits that the programmes like DBT, PM Kisan and Swachha Bharat, universal vaccination, various pension and employment schemes, including Mahatma Gandhi National Rural Employment Guarantee.

The schemes are reaching grass root levels and stated to better lives of the poor. Even separate meets with different caste and dalit groups are planned. The BJP claims such strategies led to shifting of the 8 percent extreme poor minority votes in UP elections.

The income of the common man has also almost doubled. It's not untrue but a recent PM's Economic Advsiory Council report mentions that five to seven percent of the country's income comes from the top one percent, while 15 percent earn less than Rs 5000 a month.

It may be one of the longest canvassing and campaigning for a party that has to capture a number of states held by the opposition. Some like Telangana chief minister K Chandrashekar Rao has posed a challenge. Parties like AAP are eyeing Himachal and Gujarat. Ten states will form new governments in 2023 and four states that are to have elections by June 2024 may cast vote with the Lok Sabha elections.

An election is a tough game so the party is taking its blitz to booth level, according to BJP president JP Nadda. The BJP stress is more on man-to-man contact by lakhs of party workers in the most remote villages to explain to the people what the party has done for them beyond the free food dole. Thousands of groups would carry on the re-education of the masses in all states.

How big is the campaign splash is anybody's guess. The UPA government too had splurged Rs 2658 crore as per official statements on publicity. During the eight years the BJP has also spent a substantial sum. The early start by the BJP will pressurise its opponents to match the splurge to remain relevant.

The central government spent Rs 1698 crore on publicity and advertisements between 2018 and 2021 for print and electronic media. The party has separate state-wise budgets.

The campaign for the next 25 years is ambitious, not easy, and aims at changing the gamut of Indian politics.