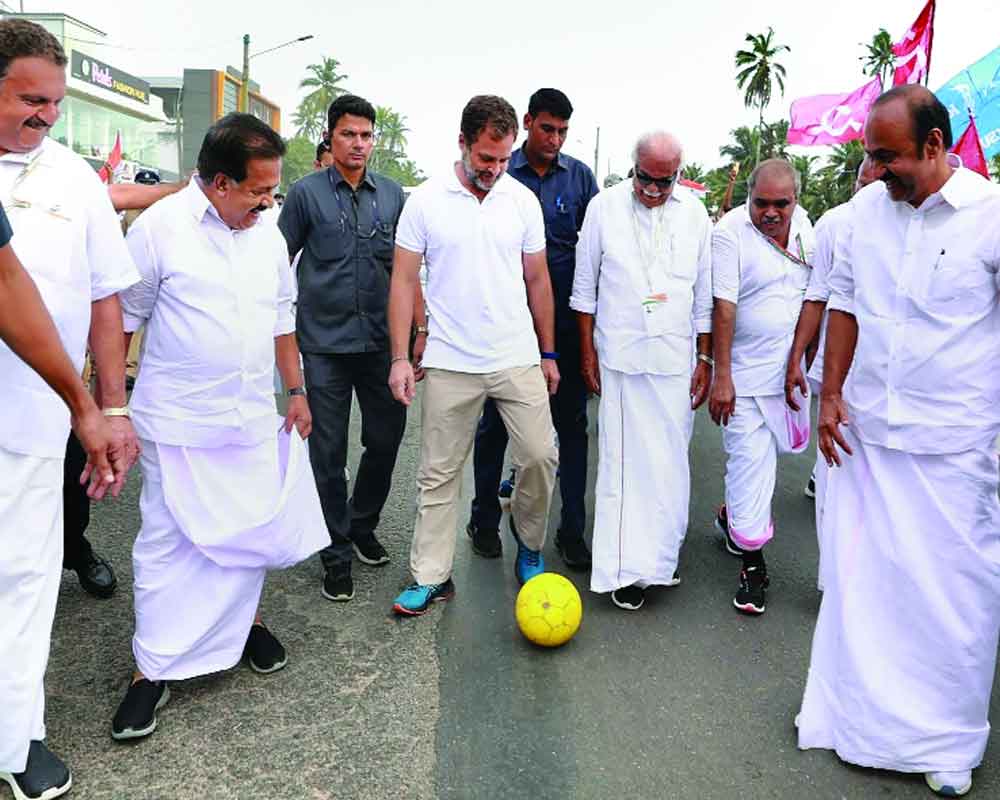 To the discerning mind, the two concurrent but unrelated spectacles in the annals of India and the UK respectively — Rahul Gandhi’s Bharat Jodo Yatra and Queen Elizabeth II’s magnificent last journey —are pregnant with meanings and possibilities in the realms of public affairs. The torrent of emotions being witnessed at the two events bears testimony to the unpredictability of the people’s impulsive gesture, often shaped by unexpected occurrences — in the first case, the much vaunted 50-day long nationwide marathon by the grand old party infamous for its political slumber after poll drubbings since 2014, and in the second one, the sudden demise of the “revered” British monarch. But what the eyes see is not always the gospel truth.

For if we assume the massive outpouring of grief for the Queen resting in her eternal sleep as a steadfast deference to Britain’s longest-reigning monarch, it would be inconceivable for the uninitiated to even fathom the fact that the venerable monarch had been hated in equal measure by a large section of her populace and those abroad, many of whom have refused to mourn her departure. Though just a figurehead, not a political head of the state, the Queen was never forgiven for the British military’s crimes, some as heinous as genocide. Till her last breath, the carnage of Mau Mau rebels, and the Chuka and the Hola massacres tainted her “clean” image. Back home, after Princess Diana’s tragic death in a car crash, the Queen was loathed by people for her crass remark that “someone must have greased the brakes”. Elizabeth II was abhorred for vetoing the prosecution of her younger son, Prince Andrew, in the sexual assault case. The Queen was slapped with the epithet of the reigning monarch of the “raping genocidal empire”. However, after all is said and done, the periodic abomination till the recent past didn’t eclipse the global outpouring of grief when her end came.

Similarly, Congress leader Rahul has been given many demeaning epithets by his political opponents. Even trenchant critics from within the Congress repeatedly question Rahul’s leadership skills in the wake of his political blunders like inexpedient absence soon after political drubbings, frequent sabbatical from political activities when the party needed his guidance for the revival of its lost glory, and philosophical utterances which are often spun out of proportion by the BJP’s troll army.

Despite all the brickbats, the stark fact is that Rahul enjoys the unflinching support from the Congress cadre who look upon him for the party’s revival strategy. Seen in this perspective, Bharat Jodo Yatra, it seems, is his first serious arduous endeavour to break the nagging doubt in his ability to lead the party from the front.

The massive support from the public, and the occasional succour by regional parties of the States concerned, to the yatra has for the first time in the past one decade put the Congress and Rahul back in the reckoning in the national political arena. The massive turnout has rattled not only the BJP, which has wrested the national political space, but also Congress’ parasitic regional alliance partners who feed on the Congress’ diminishing fortunes for their growth in the region.

Bharat Jodo Yatra has given the Congress and Rahul’s leadership of the party a fresh lease of life, but as said earlier, the spectacle doesn’t guarantee that the likely revival of the Congress will convert into electoral dividends.

However, there are three things clear to my mind.

First, the idea of Congress-mukt Bharat is a utopia. The Congress has taken root in the past 75 years to be uprooted by the recurrent political onslaught. Though its strength has diminished and voters have kept it on a roller coaster ride for over three decades, there is an unexpressed understanding among the masses that it is the only other national political party which can work on its dream to become a national alternative to the Modi-led BJP Government.

Second, defeating the Narendra Modi-led BJP is not a cakewalk for any single party or a ragtag coalition of “secular” parties. According to surveys, voters are not in two minds about who should be India’s Prime Minister and Modi’s towering stature is intact as that is the USP of the BJP even in the State elections. Though for academic records, the demonetisation and the “sudden imposition” of GST, in whose maze the traders were lost during the long initial period, were ill-conceived, the general public, particularly the poor, condone the failures as procedural lapses in the fervent conviction that the schemes had a pious intend for the greater good of the nation.

Third, though the BJP has retained the loyal vote of a section of the aggrieved Hindus who had been yearning for the change after years of neglect by appeasement politics, the Hindu vote is a misnomer. Those doubting the truth should recalibrate their scale: Hindus, the most plural and heterogeneous religious community, constituting 80 per cent of India’s population, comprise 80 per cent of the voters. If there is a Hindu vote, the BJP would garner about 50 per cent of total polling from Hindu voters alone, considering that there is the usual 60 per cent turnout in an election.  But the BJP secured only 31 per cent vote in 2014 and 37 per cent in 2019 elections, including those from minorities and tribals. Therefore, the “secular” parties are to blame for the BJP’s securing the lion’s share of the Hindu vote by whipping up their sentiments. Then Prime Minister Manmohan Singh’s assertion that “Muslims must have first claim on national resources” was the turning point that defeated the appeasement politics.

However, the same heterogeneity of the Hindu voters is cashed in on by the caste politics, seen in plenty in regional politics. But the revival of the Congress poses a threat to regional parties’ prospects. Though JD(U) leader and Bihar Chief Minister Nitish Kumar is trying to cobble together a coalition of Opposition parties, including the Congress, until two major regional players, Mamata Banerjee and KCR, espouse the cause of the Opposition unity, the initiative will be half-baked.

Nevertheless, it is too early to predict 2024. One and half years before the next Lok Sabha polls, nobody can hazard a guess as to what will shape the voters’ behaviour and their choice at the polling booths.

However, one thing is certain: Voters don’t forget issues that affect their day-to-day life. People are getting weary of the rising inflation that is the only chink in Modi’s impregnable armour, at present. The rising cost of living and unabated price rise of essential goods, particularly food items, can break the spell the Modi-led Government had cast on the majority of its voters. If Modi fails to stem the price rise, even the ragtag coalition of Opposition parties can cash in on the Achilles heel of the Modi Government in 2024.

(The writer is Associate Editor & News Editor, the Pioneer)