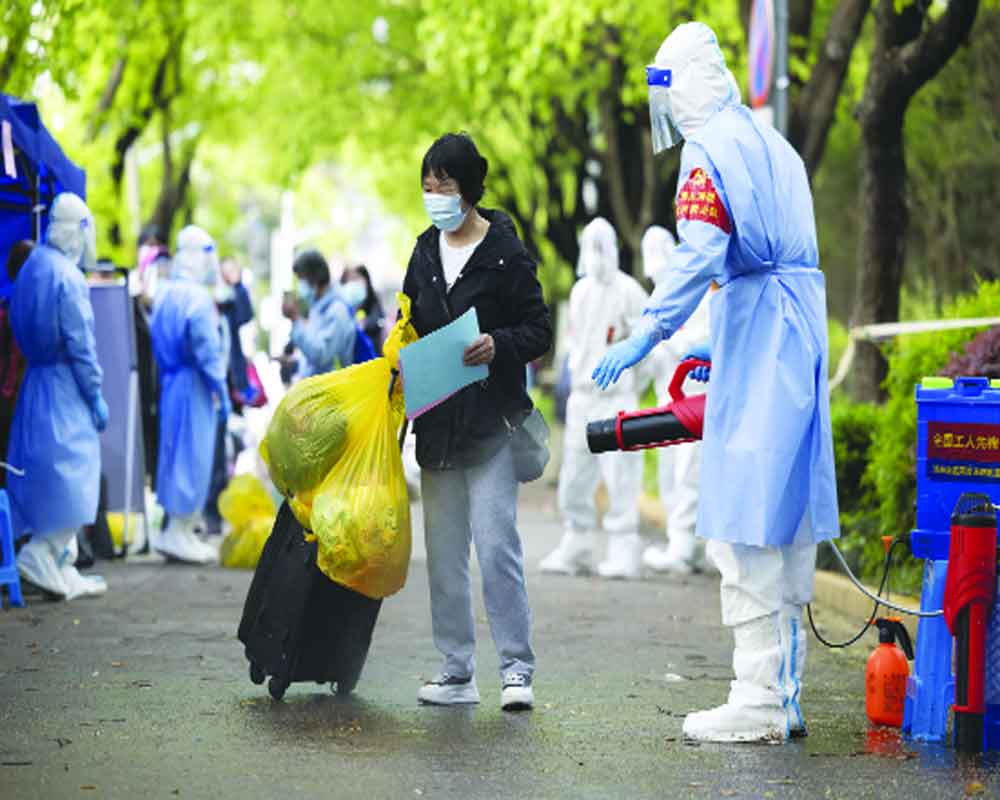 With the Covid becoming a nightmare for Shanghai residents and big corporations, China may find it too difficult to achieve its 5.5 per cent growth rate set for this year. But the maintenance of Covid fortress in Shanghai beyond the upcoming Party Congress may be too difficult for Xi. And his detractors are waiting for a chance. Certainly, there would not be any open rebellion against his leadership, but his ever-greater control over the party and leadership may slowly decline

The road ahead for Chinese President Xi Jinping is challenging as Beijing’s “zero Covid” approach is encountering mounting challenges and Shanghai is experiencing the worst of the coronavirus crises ever in the country since the onset of the pandemic in 2020.

There are credible reasons behind Xi’s constant concern about the health emergency in Shanghai at a time when almost the whole world has recovered from the pandemic. In fact, by leaps and bounds, the most powerful business capitals of the world such as New York, Tokyo, London, Frankfurt, Hong Kong, Singapore, etc, are back to normal business.

But China, which has been constantly facing the wrath of the West, is seriously under strain as there is no let-up in Covid-19 severity in its powerhouse called Shanghai.

Why is the Shanghai Covid-19 breakout critical for the global economy? With the Covid-19 becoming a nightmare for Shanghai residents and big corporations, China may find it too difficult to achieve its 5.5 per cent growth rate set for this year.

This year-end, Xi’s grip over the Communist Party of China is heading for a crucial leadership reshuffle. Xi’s highly ambitious political agenda is constantly getting unmasked. Behind his steely facade, some China observers opine that confidence over the all-powerful Xi is gradually ebbing. As he is inching towards his third term by early next year, he has been tightening control over the party, military and the government.

Today, China’s worst Covid-19 disaster has come under control. But nearly a month-long lockdown was too harrowing and punishing for the city. But Beijing’s Communists have vowed to stand by their so-called “Zero Covid Strategy” despite having mounting business losses in the financial hub. The number of new infections has come down since April 22 but city officials, including the Vice-Mayor Wu Qing, have come out in public to announce that “currently our city’s epidemic prevention and control situation is steadily improving, and the epidemic has come under effective control”.

For now, community transmission has been curbed. But health experts are sounding a note of caution saying there is a chance of rebound. Therefore, it would be difficult to relax the restrictions altogether.

Finally, it can be said Xi is facing the test of time. At the moment, global power calculus is also seriously disturbed by the ongoing Ukraine war. And China has a big stake in the devastating conflict as Xi has directly backed Russia against the severe sanctions imposed by the western nations over Moscow. Putin is heavily relying on India and China. Against the backdrop of all the NATO and the EU allies marching against Russia, lending support to a war monger like Putin might cost seriously to both Delhi and Beijing in the aftermath of the war.

China for long was expecting a stiff resistance to the global liberal order spearheaded by the US since the end of the Second World War. Hence, Xi is undoubtedly happy, but he should not expect that Putin will act as a junior partner in a China-led future global order. Neither India will accept an Asian or world order led by China in anytime in future.

Having been embroiled in a protracted border conflict in Eastern Ladakh and over the historic McMahon Line in North-East, it would be really difficult for Delhi to meet Beijing in a normal bilateral meet. These all are complicating Xi’s manoeuvring space at home, in the neighbourhood and at the global stage.

Hence, the maintenance of Covid-19 fortress in Shanghai beyond the upcoming Party Congress may be too difficult for him. And his detractors are waiting for a chance. Certainly, there would not be any open rebellion against his leadership. But his ever-greater control over the party and leadership may slowly decline. This will seriously hamper his grand plan to remain the permanent President of China.

Shanghai’s importance is ever-growing since the establishment of the People’s Republic of China (PRC) in October 1949. Started as a fishing village in the 11th century, the city has become the most powerful financial hub of China. It is also known as the “Magic City” in China. By the 1800s, it became the largest city of the country. And most importantly, Shanghai gradually came to the limelight for growing cotton by the mid-18th century. Through the 90s, the city witnessed a steady economic growth between 9 per cent and 15 per cent.

Again, Shanghai holds the key to administration in China. It is a provincial administrative region of the PRC.

It is very close to the heart of the Communist Party of China as it was the birthplace of the party. It is situated in the west coast of the Pacific Ocean, the east coast of the Asian continent, at the front edge of the Yangtze River delta, and exactly at the middle of the country’s north-south coastline. Apart from its alluvial soil, it has the advantage of having a subtropical monsoon climate, very mild and humid with four distinct seasons throughout the year. Besides, Shanghai receives sufficient sunshine and abundant rainfall. It has all the power because of its geographic location.

Economically, Shanghai is the centre point of China. It’s the world’s third most populous city behind Tokyo and New Delhi. Today it is an international financial centre. And since the coming of Hu Jintao to power in 2002, the Chinese Government has been making consistent efforts to make Shanghai a global business hub, competing with London and New York. With Xi, these efforts have been doubled so as to bring China to the economic powerhouse of the planet. Furthermore, the Shanghai Stock Exchange directly governed by China Security Regulatory Commission is today considered the country’s most pre-eminent market for stocks in regard to turnover.

Today, Covid-19 menace in Shanghai is pushing Xi to another struggle both within and outside China. These days people have witnessed growing quiet reprisals and rising tide of criticism against Xi in the party. The man who has so far been termed as the most powerful “Paramount Leader” only after Chairman Mao Zedong and Deng Xiaoping is facing an uphill task this year. Mao being the founder of the People’s Republic of China (PRC) continued unchallenged as the Chairman till his death in September 1976. Then after a brief lull of uncertainty of Hua Guofeng’s tenure from 1976-78, Deng took over the leadership of China. Deng became the father of modern China by opening the country to a market economy while safeguarding the unique nature of the Chinese political system.

He ruled China from 1978 to 1992, solidifying the Communist Party of China (CPC), its leadership and China’s influence in the global governance system. Interestingly, he made a change in the Chinese Constitution that no single individual can continue in power beyond two terms i.e. 10 years as he strongly propagated the concept of collective leadership to keep at bay any chance of “Cult Leadership” tendency the way Mao preached and practised.

The Shanghai Covid-19 crisis is testing Xi’s patience and leadership. Its more than 25 million people are mostly trapped at home. In March this year, he renewed his threat to punish any cadre who fail in their fight against Covid-19 spread in Shanghai. This clearly shows how serious he is over the issue as the country’s most crucial financial hub is witnessing an unprecedented growth of Covid-19 cases. Indeed, he is in a bind over who to blame and hold responsible for the mess in Shanghai.