The man who broke up the Soviet Union

The man who broke up the Soviet Union 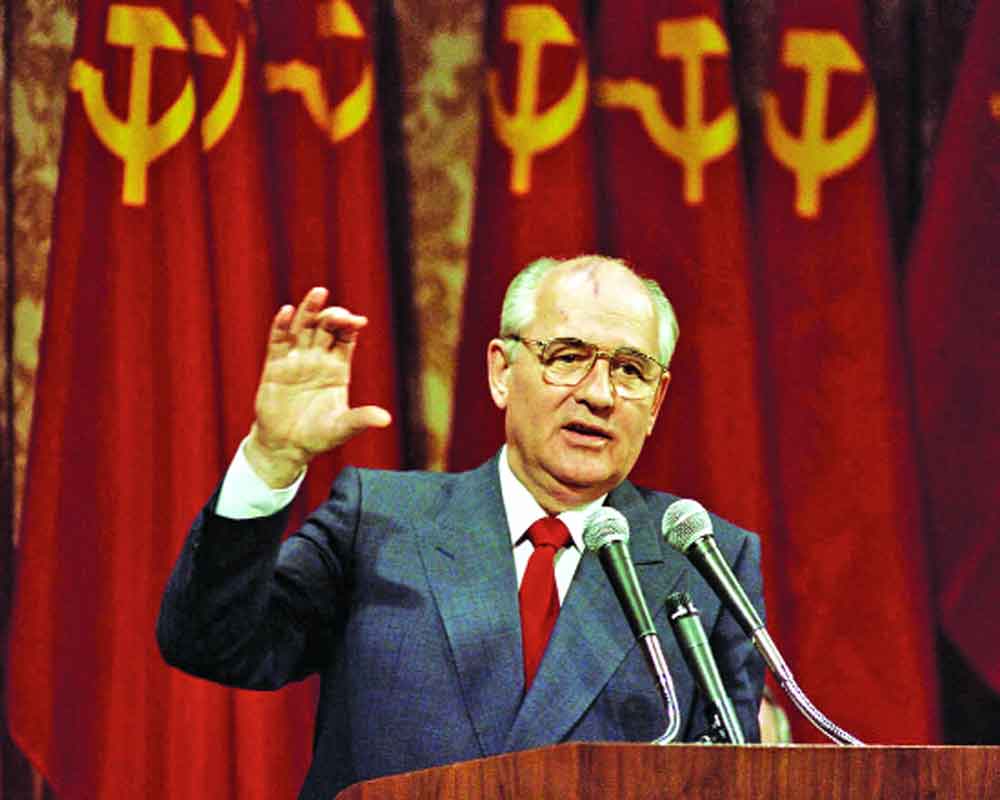 Gorbachev, the man who oversaw the collapse of the erstwhile USSR, is no more. His method might be questionable; his intentions are not

Mikhail Gorbachev's place in the hall of history is reserved for altering the future of the whole world in a matter of six or seven years. Arguably no other leader in history has engineered such a revolution in so short a time. His government run by Kremlin not only redrew the map of the Soviet Union but also metamorphosed the political economy of the world. The new ideology introduced by Vladimir Lenin in 1917 which delighted the poor and depressed rich got buried with the reforms of Gorbachev by 1991. The ideology tightly expressed was from 'each according to the ability to each according to need'. All persons are equal and therefore should be rewarded about the same. Those owning the mean of production (therefore presumably producing wealth perpetuating inequality) should be dispossessed by the State.

In a matter of a few decades, the poor realized that this ideology of Karl Marx and Lenin was instead making the poor poorer, producing less and less wealth and enriching only the officials or eparchies of the Communist Party of USSR. Gorbachev was the first leader or President of the Soviet Union to discover how badly his country was doing. His predecessors were so much out of contact with the people that they could not know and therefore did nothing to salvage their country's economy.

Gorbachev came to power (in 1985), saw, and decided to change and change quickly. He had no time to stand and stare to realize how deep the malaise had gone. Nor did have the patience of a political doctor to visualize the adverse reactions of his possible remedies or the consequences of his hurry to save the patient. He behaved like a hospital intern in a hurry to operate; and in the bargain, amputated, if not virtually deranged, it. European-cum-Siberian Russia did not mind the Asian provinces seceding from the USSR. There was also a rush of blood in the Kremlin hospital which also let European provinces like Ukraine, and Belorussia also separate from the USSR. What the Czars of the Romanoff dynasty had collected or conquered over two centuries was broken like a toy by a Communist child in two weeks.

On coming to power in 1985, Comrade Gorbachev began talking of 'perestroika' or restructuring something similar to privatizing. He felt that state ownership of industries or state capitalism had failed. But as said above, he did not take time off to stand and stare, contemplate the implications as well as the possible consequences of perestroika. He was in a hurry, and being open or in Russian called glasnost. This combination of perestroika and glasnost proved fatal for the unity of the Soviet Union. The four years that followed were nothing if not chaotic for the vast country. Which official or citizen supported what, was not clear so confusing was the Soviet situation. No leader rose to help control the disorder.

The Communist sympathizers explain in debacle as the absence of democracy. There were no elections anywhere as a result of which the leaders were starved of genuine feedback. When therefore the policymakers are unaware of what the people are thinking, blunders are not difficult to commit. Conversely, the people do not know what the leaders' intentions are.

Josef Stalin stumbled along for 29 years as the supreme leader due to several unusual reasons. His political genius included his understanding of Mother Russia but also the others like Georgia, Armenia, Azerbaijan, and further east the Asian territories. After the failed regime of Czar Nicholas II, the Bolshevik Revolution brought hope of modernization as well as justice for the poorer classes, especially the proletariat. The threat of Hitler's Germany was followed by World War II. Although difficult to tell why most of the credit for defeating Hitler went to Stalin in popular eyes. Stalin's purges and killings were not known to the people until his real successor Nikita Khrushchev exposed them at the 20th Congress of the Soviet Communist Party in 1956.

The excitement or the final blame for the Soviet Union breaking up must go to Mikhail Gorbachev. But the roots were laid by the Red ideology of Karl Marx. It appears that he just did not understand psychology. Why should anyone work without any hope of promotion or progress in their career? From each according to the ability to each according to his need meant just that. The needs of all are the same; therefore they should earn more or less the same. On the morrow of the Revolution, the industrialists were dispossessed of their industries. Even if we ignore the injustice, did the Soviet regime find replacements to manage the industries? No, the Party could only offer their apparatchiks or political workers. For all new plants and projects started in Stalin's time, no effort was made to train or educate managers. No, because they might be Marxists or even loyalists. They were suspected of being bourgeois or petit bourgeois.

Deng Xiaoping of China did not make these mistakes when he decided to liberalize the economy after the death of Mao Zedong. The Chinese did not abolish religion as the Soviets virtually did; they converted churches, and mosques into shops, offices, and whatnot. But not the Chinese who still put up tall standing statues of Gautam Buddha. Perhaps as a counter to Christianity.