Where the big 3 stand in Telangana polls

Where the big 3 stand in Telangana polls 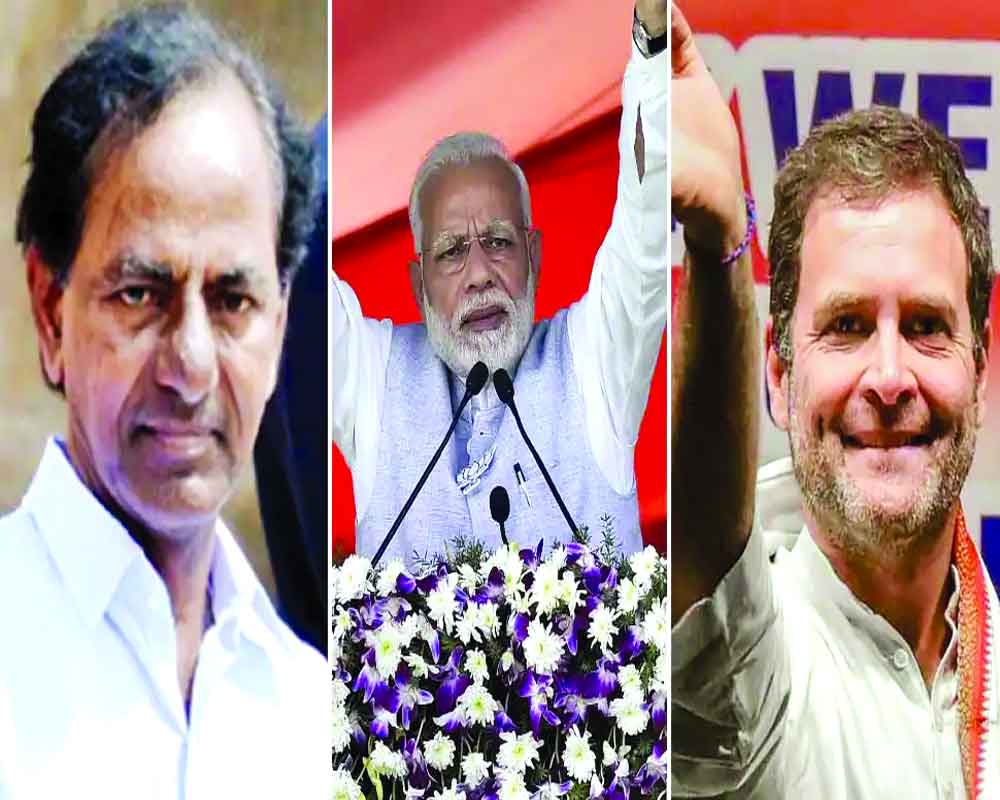 Whenever the next elections to Telangana Assembly are held, it could be as early as May-June next year or December 2023 as scheduled, it is going to be a three-cornered contest. TRS has a whopping 103 out of the total of 119 MLAs in Telangana Assembly. It won 88 seats in the 2018 elections. Congress had got 19, AIMIM bagged seven, TDP two and the BJP won only one. Later, 12 Congress MLAs, two TDP MLAs and one independent MLA joined the ruling TRS bulging its strength.

The BJP claims it can win 70 seats. The confidence comes from its wins in the by-election to Dubbaka seat and Huzurabadconstituencies..Etala Rajendra, former health and finance minister, who left the TRS and joined the BJP won against heavy odds. The TRS used all its forces and resources under the leadership of Harish Rao, known for his political abilities. The saffron party's remarkable show in the elections to Greater Municipal Corporation of Hyderabad added to its glamour.  With the Congress in a quagmire with endless dissensions and seniors in the party not reconciling to the appointment of Revanth Reddy, a young leader who came from the TDP, as the PCC president, the BJP thought its time has come. However, the Congress may have quarrelling leaders but its vote bank appears to be intact.

TRS for the first time in recent months trained its guns at the Congress. Harish Rao , Minister for Finance and Health, called Rahul Gandhi inefficient and incapable of running the party. K Taraka Rama Rao (KTR), KCR's son and Minister of IT and Municipal Administration, of late, has been very vocal in his attacks against Narendra Modi and the BJP. KCR, on his part, has been taking on Modi and the NDA government.  KCR was ignoring the Congress as though it is not going to be a player in 2023 elections. But the huge crowds at Warangal at the recent Rahul Gandhi rally forced the TRS to attack Rahul and the Congress. Congress leaders are acutely happy that the TRS leaders have started to take notice of their presence.

Rahul's meetings gave a boost to the sagging morale of the Congress leaders and workers. He said he would follow the Warangal meet with another gathering of tribals to discuss their specific problems. If the Congress can clear the mess at the top and concentrate on States such as Telangana, it can hope to gain in 2024.

The BJP has been trying assiduously to build upon the work done by RSS leaders in the constituencies reserved for dalits and adivasis. There are 19 seats for dalits and 12 for adivasis in Telangana. Whoever wins majority of them would come to power.

If the Congress and the BJP have the same pull on the voters, it will be advantageous to the TRS since both the opposition parties will share anti-incumbency vote equally thus giving an edge to the ruling TRS. If either Congress or the BJP becomes weak, it will go against the TRS since the majority of anti-TRS vote will be hogged by the second-best party.  It is a matter of fact that most of the TRS MLAs are unpopular, as reportedly suggested by poll strategist Prashant Kishor (PK). As of now, the BJP is not in a position to field candidates in some of the constituencies in districts like Nalgonda and Khmmam. If KCR followed PK's formula and changed the candidates in some of the seats where the sitting MLAs are perceived to be weak, the BJP would welcome the disgruntled MLAs, give them party tickets and try its luck.