Worship complex at the Mehrauli

Worship complex at the Mehrauli 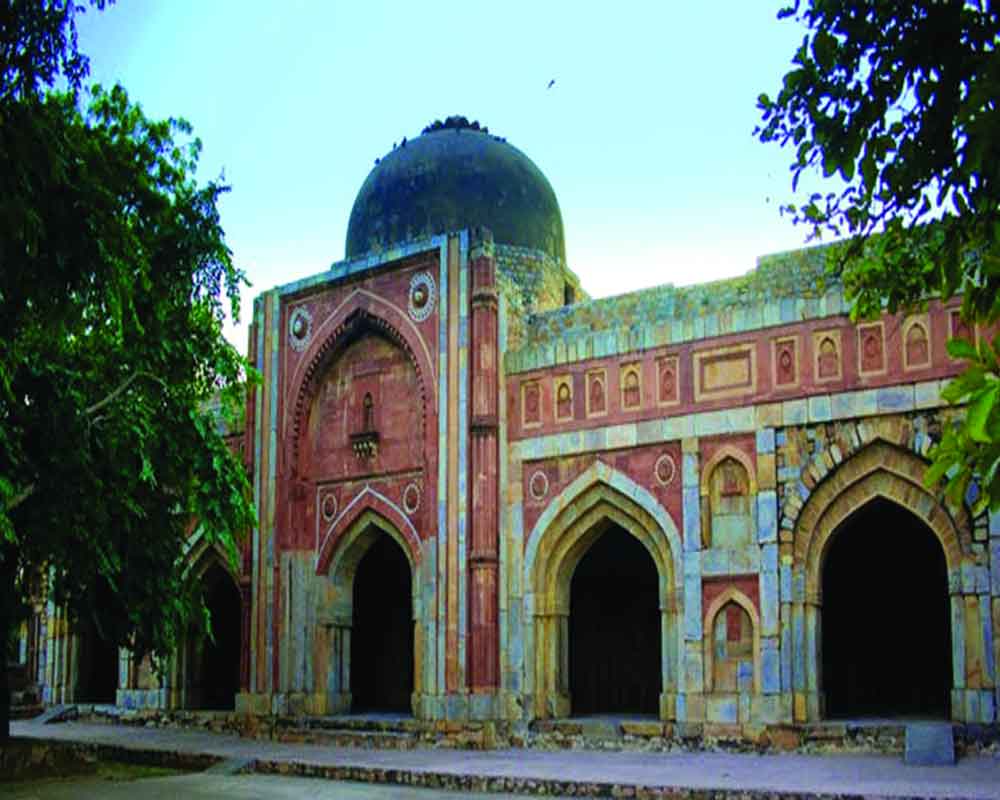 The media has been agog with frequent reports that someone in a position of authority has been intending to remove the two Ganesh idols that adorn the outer walls of what has been called the “Quwwat-ul-Islam” masjid, next to the Qutb Minar.  During the British days, the  Archaeological Survey of India (ASI) installed a tablet at the entrance of this fake mosque, declaring that it was constructed from the rubble of the partly demolished 27 Jain temples.

Reporting on the edifice in 1871, J.D. Beglar, a senior officer of the ASI, had recorded that the unsightly layer of irregular stones that covered up the courtyard be removed. It would then be possible to state whether or not a central grand temple existed earlier at the place. The legendary Ibn Battuta was categorical about the mosque being a conversion from a cluster of temples. On the site of the mosque, he wrote, there was a butkhana or a house of idols. After the conquest of Delhi, it was turned into a mosque. Idols of Lord Ganesh (deity) are even today visible on the plinth of the temple in spite of the massive destruction has taken place centuries ago. The desecration at Mehrauli was probably first perpetrated by Muhammad Ghauri. It is situated next to the well-known Qutb Minar. The mosque was located at the citadel which was known as Qila Rai Pithora. The conversion began soon after the Second Battle of Tarain, in 1192 AD, wherein Muhammad Ghauri defeated  Prithviraj Chauhan and thereafter executed him.  In the first Battle of Tarain, it was Prithviraj who had defeated Ghauri but let him go scot-free. Kshama veerasya bhushanam or forgiveness behaves a hero is what the then ruler of Delhi must have had in mind. Let us quote the version given in the Oxford History of Islam: the immense congregational mosque in Delhi known as Quwwat al-Islam (might of Islam) was one of the first such construction in India. Started in 1192, the mosque stands on the site of pre-Islamic temples whose ruins were incorporated in the structure. The tall iron pillar in the courtyard, originally dedicated to Lord Vishnu around 400 A.D, was re-elected as a trophy to symbolize Islam’s triumph over Hinduism.

There is clear evidence that thousands of temples were demolished, or made way for mosques.  The proof is given either by epigraphs on the structures or by chroniclers of the Islamic rulers. With their intricate carvings, the two Ganesh statuettes on the outer walls are invaluable in this context of history and identification.

Had the Ganesh idols been removed from the complex, it would have amounted to a civilizational renunciation of an important part of our heritage and silent acquiescence to Hindu humiliation. Worse, it would also have meant squandering invaluable evidence, without which any future endeavor of archeological and civilizational revival would be rendered an uphill task.

The Quwwatul mosque was converted from 27 Hindu and Jain temples that were destroyed. It is a monument to a people’s humiliation. If it were not so, all the statuettes that still adorn the pillars in the mosque need not have been so blatantly displayed. Even after 800 years, they are, as it were, alive for the conquered to see. However, when one reads what Sir Syed Ahmed Khan of Aligarh fame proudly wrote about the destruction of 27 temples, one’s impression of Ahmed and his mindset gets shaken. What he wrote is best read in his original words, (from his Urdu book, Asar-us-sanadid, translated by Prof. Khaleeq Anjum, Delhi in 1990, volume I):

Quwwatal-Islam Masjid’d Din Sam alias Shihabu’d-Din Ghauri, conquered Delhi in AH 587 corresponding to AD 1191 corresponding to 1248 Bikarmi, this idol-house (of Rai Pithora) was converted into a mosque. The idol was taken out of the temple, some of the images sculptured on walls or doors or pillars were effaced completely, and some were defaced. But the structure of the idol-house kept standing as before. Material from twenty-seven temples, which were worth five crores and forty lakh of Dilwals, were used in the mosque, and an inscription giving the date of conquest and his own name was installed on the eastern gate.

The relish with which the founder of Aligarh University has written this is indeed surprising. At that time, the capital of India was still in Calcutta. Had it been transferred to Delhi, his pleasure might perhaps have been greater. For, the Raisina Hill from where India is governed, is only a few miles from Mehrauli where this monument to Hindu humiliation still stands.