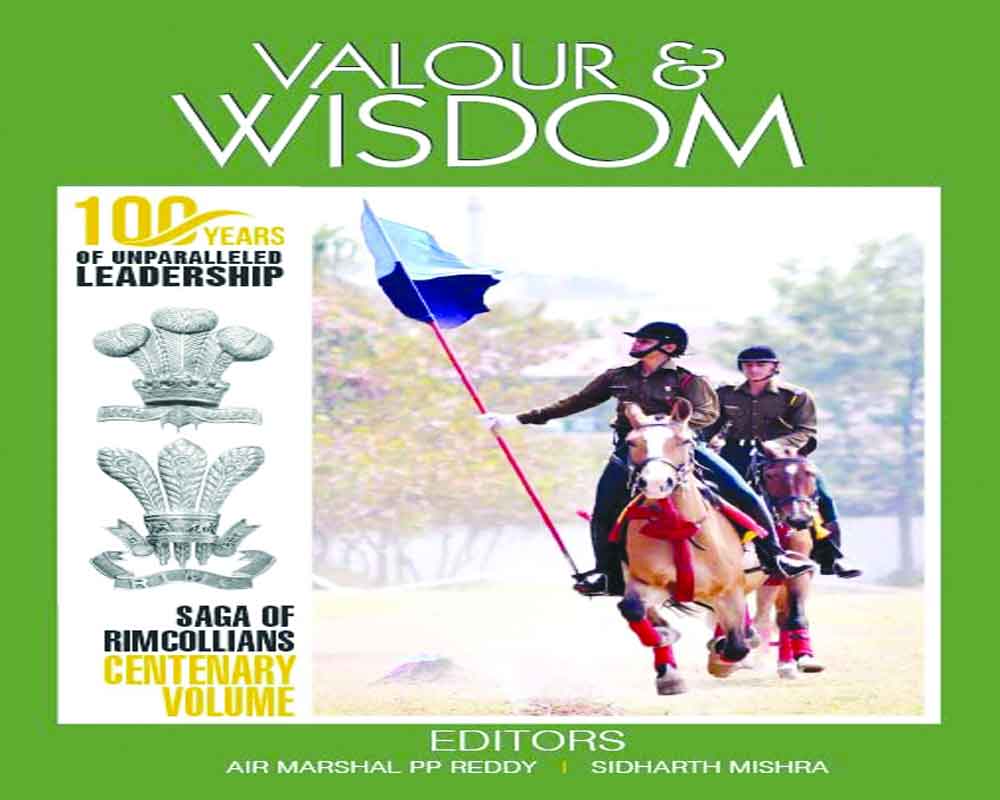 Valour & Wisdom is a well researched  chronicle of contribution made by the Rashtriya Indian Military College, Dehradun  in producing some of the bravest  war heroes of India.

It was there to defend Srinagar when tribal marauders came in 1947, it was again there to defend borders in Punjab in 1965, in 1971 it was there fighting on both the eastern and the western front.  In 1974, when the first nuclear device was tested in Pokhran it was there, so was it in Maldives, in Sri Lanka and it stood face-to-face with China in 1987.  It drove the Pakistani army out from Kargil in 1999, in 2008 it defended Bombay and lastly it destroyed the enemy base in Balakot.

Seldom has the alumni of a school contributed so much in the defence of a nation as that of the Rashtriya Indian Military College, Dehradun. Founded in 1922, the school is celebrating its centenary this year. Air Marshal PP Reddy (Retired), one of the two editors of the Book along with Sidharth Mishra describes it as the "nursery of military leadership" and says that it was the Rimcollians, as an alumnus of RIMC is known, who were in the higher echelons of the military at the time of Independence, who built and guided the Indian armed forces into a formidable foe to reckon with.

Sidharth Mishra, an alumnus of the Institute and well-known journalist, who has co-authored the nearly 500-page book, says that whenever an educational institution reaches a milestone of its existence, the practice has been to bring out self-congratulatory volumes in the genre of coffee-table books. He says that unlike that practice, objectivity has been the main plank of the book.

The book comprises essays by the alumni from various fields, tracing the origin of its establishment through its training methodology and grooming, puts on record the contributions of the alumni, school and nation building and sifts hearsay from documented facts. There are 26 contributors, most of them senior officers of the armed forces, who have sort of drawn a complete picture of the Indian armed forces from the First World War period onwards and how Indianisation of the Officer Corps began in the Great War. Lt Gen NS Brar writes the first chapter tracing how Indians were gradually inducted for training and then commissioned as officers. When the need was felt for Indianisation of the Officer Corps, the Prince of Wales Royal Indian Military College (as it was known then) was opened on March 13, 1922.

The book has a chapter on the heroes of the Second World War and the Rimcollians who were awarded Victoria Cross, Bar to Distinguished Service Order, Distinguished Flying Cross and Military Cross and lists the battles for which they are awarded. In the Battle of Abyssinia (now Ethiopia) Africa, PS Bhagat was given the Victoria Cross, highest gallantry award of the pre-Independence era. Despite close enemy fire, without food or rest for four days, he cleared 15 minefields over a distance of 55 miles and was evacuated after punctured eardrums.

Then, there is a chapter on integrating J&K and the role of Rimcollians. In the Battle of Badgam, Major Somnath Sharma, at the age of 25 was martyred and due to his bravery became the first recipient of the highest gallantry award of Independent India--Param Vir Chakra. His efforts had significantly slowed down the advance of the enemy raiders and bought valuable time for the Indian troops to fly into Srinagar.

In the 1961 Liberation of Goa, called Operation Vijay, Lt Gen KP Candeth played a pivotal role in retaking the colony from the Portuguese.

In the 1965 Indo-Pak War, three Rimcollians, Major GC Verma, Major MS Bal and Major JC Pandey made the supreme sacrifice. Similarly in the 1971 war, the entire western border with Pakistan was under the command of Rimcollians and the book lists the contributions of the alumni in the liberation of Bangladesh. IPKF operation in Sri Lanka in 1987, Operation Cactus in Maldives in 1988, Kargil Conflict in 1999--all had the presence of Rimcollians, the book lists.  There are thrilling chapters on the Rimcollian Infanteers, the Tankmen from Rajwada, the Gunners, flying wings and other branches.

Interestingly, it is not only about the armed forces that the book talks about. But also, about those Rimcollians who have cracked JEE, CAT, NEET, GRE, GMAT and other exams and their success in different walks of life. Be it chronicling military history of Independent India and successes through individual and team efforts, Valour and Wisdom makes an effort to project the need to preserve institutions, which have kept alive the values and traditions, which the founders of our national struggle nursed.  The writer says that the book is an attempt to set right the historical perspective, analyse qualities which made the school alumni leaders extraordinaire and visionaries in their own right. "This effort would probably aid those who seek to learn from the lessons of the past for a better future," says Mishra