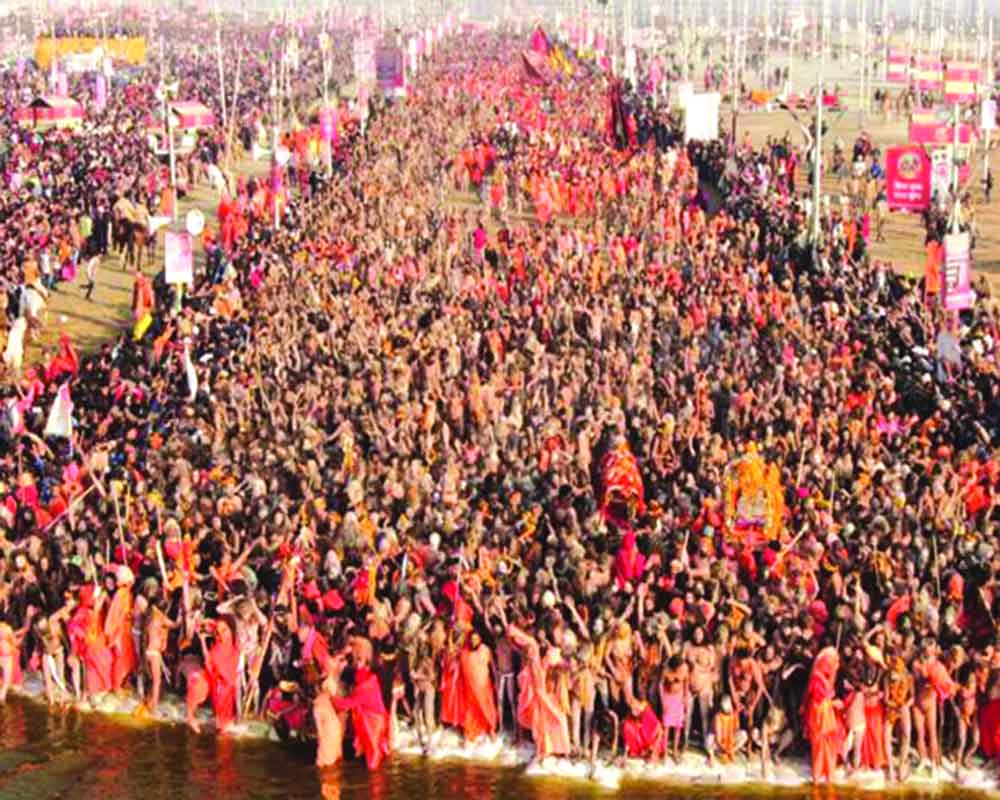 A ritualistic bath at Sangam during Kumbh is a dream for millions of Hindus across India. One of the best-known Bengali writers of our time, Samresh Bose, takes us on a memorable journey to the Kumbh mela in his fabulous book IN SEARCH OF THE PITCHER OF NECTAR. On this pilgrimage, Bose also exposes the duplicity of our belief system, writes Navin Upadhyay

The magic of Kumbh mela, a humongous congregation of millions of devotees for taking the purifying ritualistic dip at Sangam, has spawned hundreds of fiction, non-fiction and memoirs. Samresh Bose’s IN SEARCH OF THE PITCHER OF NECTAR is one such effort.

Translated from the Bengali original “ Amrita Kumbher Sandhaney” by Nirmal Kanti Bhattacharjee, the book revives the magical atmosphere of the Kumbh Mela and the mythical tales surrounding it: How a holy dip at Sangam, the confluence of Ganga, Yamuna, and Saraswati, at the moment of the Kumbh, can provide you with “ moksha” both here and in the afterlife.

The title of the book comes from the mythical tale that Amrita, the nectar of immortality arising out of Samundra manthan, the churning of the ocean by Gods and asuras, spilled out from the pot at this location. The dialogues between the two main characters in the first few pages underline the essence of their spiritual journey. One such exchange takes place as early as on page 11:

He smiled sweetly and asked. “ Why do people from the whole world go there? Why do saints and monks come there to take a dip? Have not you seen how bright they look? How well -built their physique? People are cured of their disease and receive a hundred years of life span if they bathe in the Sangam at the auspicious Kumbh moment. This is why I am also going?”

The narrator commences on this journey with the desire not to achieve atonement, but to learn about life, about people. He is amazed and inspired by every character he meets, whether it is his fellow passenger on the train, sadhus, and devotees like Mahavir and Ramjidasi at the festival, or the family with whom he shares a tent.

The protagonists reveal the double standard of the society that Kumbh brings to the fore.. How many of those millions who take the ritualistic bath are really spiritual, kind, and compassionate? The book highlights how these hardcore devotees are unable to leave behind their social prejudices, their weakness for sensual pleasure, their joys, and sorrows, their possessions and obsessions even when they are thinking of “mokshas”.

Samresh Bose, born in Dhaka in 1924, is regarded as one of the greatest Bengali writers of all time. His stories have been turned into award-winning films. He received the Sahitya academy award ( 1980) for his novel Shambha. Among his more successful novels and short stories, collections are Baghini; Ganga; B..T. Roder Dharey; Shastharipu; Rituanga;. He wrote several travelogues under the nom-de-plume Kalkut.

Anyone interested in literature and travelogues as well as spiritualist forays will find this a fascinating book. The language, the dialogues, and the translations are excellent. IN SEARCH OF THE PITCHER OF NECTAR is undoubtedly one of the finest books to hit the stands in recent months in the domestic market.