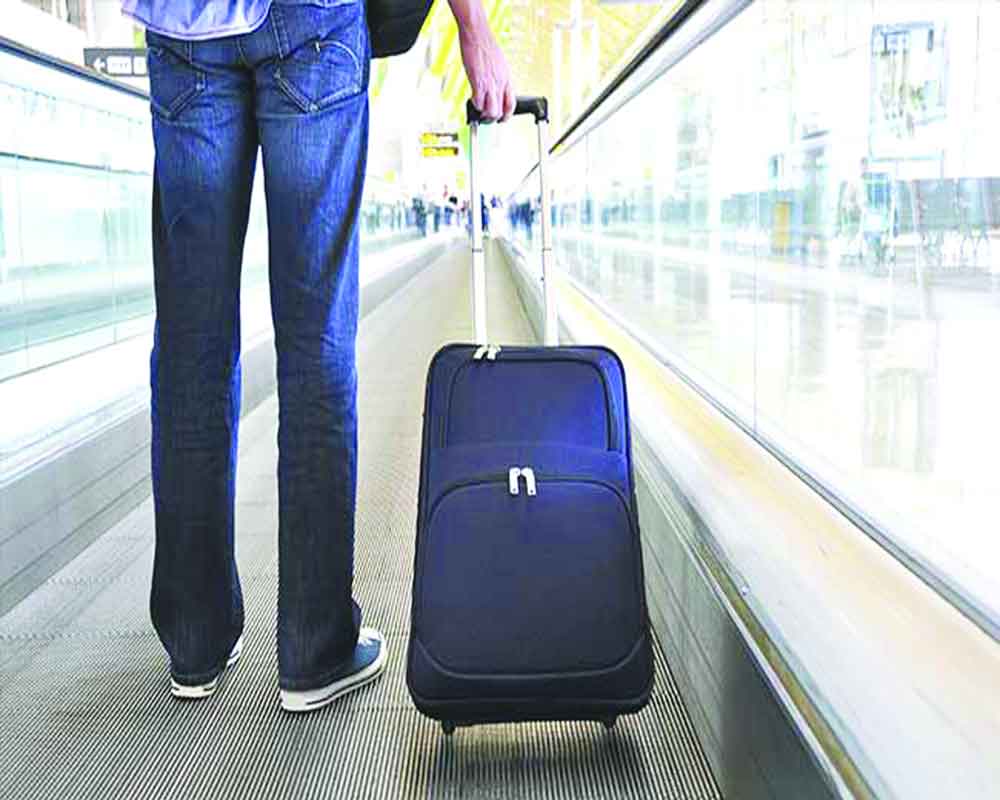 Swapna had dropped a ‘bombshell’ alleging that Chief Minister Pinarayi Vijayan had utilized the services of the consulate general to smuggle out a suitcase stuffed with currency notes to UAE during his official tour to  West Asia in 2016, writes Kumar Chellappan

kerala is in a state of turmoil. The months of June, July, and August usually keep the state wet thanks to incessant rains of South West Monsoon. Instead of rainfall and hailstorms, Kerala has been pinned down by allegations of corruption involving a select few of the ruling CPI-M..

June 13 turned out to be a literal Black Monday for Chief Minister Pinarayi Vijayan who was flying back to Thiruvananthapuram from his native district of Kannur after the weekend sojourn in his palatial mansion at Pinarayi, his hometown. When the IndiGo aircraft landed at Thiruvananthapuram airport and Vijayan alighted from the plane, two young Congress workers who were travelling in the same flight shouted slogans like “Quit Pinarayi ,Quit” and “Down with Corruption”. They were allegedly assaulted by E P Jayarajan, convenor of the Left Democratic Front and an acolyte of the chief minister. The “trouble makers” were handed over to Police who registered a case against the duo for the attempt to murder the Chief Minister. Jayarajan told reporters that both the Congress workers were fully drunk and it was difficult to make out what they were shouting at.

How come two murderers who were allegedly deputed to assassinate a VVIP consumed alcohol and got inebriated is a million-dollar question.

The incident that took place inside the aircraft was the culmination of a three-day long State-wide agitation and demonstration by the opposition Congress and the BJP demanding the resignation of Vijayan over the statement made by Swapna Suresh, a former liaison executive with the Thiruvananthapuram office of the United Arab Emirate Consulate General. Early last week, Swapna had dropped a ‘bombshell’ alleging that the chief minister had utilized the services of the consulate general to smuggle out a suitcase stuffed with currency notes to UAE during his official tour to  West Asia in 2016. This is the first time in Kerala’s political history that allegations of this magnitude are thrown at the top political leadership of the State. Swapna, who herself is not an honest character, had given a statement to a judicial magistrate at Ernakulam under  Section 164 of the Code of Criminal Procedure that she had facilitated the transport of the suitcase stuffed with currency notes through the diplomatic channel in Thiruvananthapuram international airport to be flown as diplomatic baggage to the UAE. She also disclosed that the then consul general of the UAE had sent big vessels covered with silver foils from his office to the Chief Minister’s Official bungalow Cliff House. Though it was claimed at that time that the vessels were packed with biriyani, questions are raised about Vijayan’s obsession with the delicacy. “Eating the UAE-cooked biriyani every day is suspicious and needs an elaborate probe,” said a senior opposition leader. It is alleged that the biryani vessels were being deployed to smuggle gold from West Asia to Cliff House.

The memories of 2019-20 are still fresh in the memory of the people. Swapna Suresh, and her associates Sarit and Sajith were arrested by the central agency for alleged smuggling of gold through diplomatic channels in the airport. The 2021 assembly election was fought against the backdrop of Swapna, Gold and Smuggling. She was arrested by the National Investigation Agency and the Customs Department under charges of gold smuggling but was released on conditional bail after year-long incarceration. Sarat and Sajith, her two male associates too were arrested by the police but the prize catch was M Sivasankar, the IAS officer who was the principal secretary to the chief minister allegedly for facilitating the smuggling. Sivsankar spent almost six months in jail before he too was granted bail in the case. Meanwhile, the investigation into the case by the central agencies like Enforce Directorate, Customs, Directorate of Revenue Intelligence and CBI came to a halt as the State administration put up a massive resistance against such probes. The agencies could not lay their hands on the file related to the “gold smuggling” as the room in the State Secretariat where the files were stored was engulfed in flames devouring the entire stock of files. Though Swapna and her associates had visited the Chief Minister’s Office and residence more than a dozen times to take orders, the closed-circuit TV visuals from both the venues were lost “because of thundershowers and lightning”. Moreover, the probing agencies could not extradite the kingpin of the smuggling syndicate based in Dubai because of his connection in high places.

It was at this juncture that Swapna, who had been a Kerala State Government Official coordinating with scientists of the Indian Space Research Organization (ISRO) to set up Kerala’s Space Park in the capital city, came out with the disclosures about the chief minister taking with him the currency notes to UAE. Swapna also claimed in her statement that Vijayan’s wife Kamala, daughter Veena and her new husband Mohammed Riyaz (minister for PWD and tourism in Vijayan’s council of ministers) have business interests in West Asia and had sought the former’s help in meeting the  Dr. Sheikh Sultan bin Mohammed Al Qasimi, Ruler of Sharjah, during his visit to India in April 2017. Swapna said the chief minister, his wife and daughter had one on one meetings with the ruler of Sharjah and had asked him for help in investing their savings in Sharjah. Though Veena Riyaz was granted permission to set up an enterprise in the oil kingdom, it was withdrawn following opposition within the royal family itself, according to Swapna. If these allegations are found true, this could end up as a major case against Pinarayi Vijayan for violation of diplomatic propriety. The disclosures come at a time when there are reports in a section of Kerala media that Vijayan and his family had made thousands of crores worth of investments in the UAE.

Despite Vijayan feigning ignorance about Swapna ( he described her as the controversial woman), she had made it known that she was a regular visitor to the former’s household and had tutored the chief minister and his family members about the etiquettes to be followed while calling on the Ruler of Sharjah. In another disclosure, Swapna alleged that Vijayan had illegal relations with Believer’s Church, a sect launched and owned by self-styled bishop K P Yohannan. He had helped Vijayan and family members in laundering their ill-gotten wealth abroad. To date, names of only a couple of prominent RSS leaders were having illegal relations with Yohannan and his Church. These Sangh leaders had helped the Believers’ Church to open schools, orphanages and hospitals in north Indian states. Interestingly, the Sangh-owned newspaper and publications were careful not to publish reports about the Income Tax Department’s raid in Believers’ Church offices and institutions owned by the Church. There was a lot of sound and fury when the Kerala Government led by Vijayan decided to purchase the Cheruvalli Estates of the Church measuring more than 1,000 acres to construct an airport in Sabarimala.  The raid by IT department in 2020 had hogged the national limelight when it was announced by the officials that an amount of Rs seven crore was found in a car parked in the Church-owned establishment.

Swapna’s disclosure to the judicial magistrate was just one of the charges being faced by Chief Minister Vijayan who returned to power with an unprecedented majority of 99 seats (out of 140 that were at stake) in the 2021 assembly election. Vijayan’s is the first government in the last four decades to win successive elections and retain power. But the second term of Vijayan began with a lot of heart burning among senior CPI-M leaders as they were side-lined during the election and ministry formation. Mohammed Riyaz, daughter Veena’s new husband, who was elected to the House for the first time was made a minister and important portfolios (tourism and Public Works Department) were given to him. Similarly, the appointment of T N Seema, a former heart-throb of party leaders as chairperson of the Nava Kerala Mission in the rank of principal secretary to the State, has shocked the entire bureaucracy. “Her only qualification is that she had accompanied the chief minister in his State-wide yatras and nothing more than that,” said a serving IAS officer.

The CPI-M and its chief minister have become the butt of jokes even within the party and its alliance partners. The present scenario reminds one of the scenes from the 1991 movie Sandesham, a political satire directed by ace movie maker Sathyan Anthikkadu , which became a runaway success thanks to the punchline dialogues. The opposition RMP’s strategy to attack the ruling INP is to link the young leaders of the latter to all illegal pregnancies and sex scandals happening across the State, and this has come true in the case of the CPI-M. Not a single day passes in the State without reports about sex scandals featuring CPI-M leaders in them. When the CPI-M was in the opposition in 2011 it had used the services of Saritha Nair to discredit the then chief minister Oommen Chandi. Saritha had alleged that Chandi had summoned her to his official residence and abused her sexually. One of the very few politicians in the State with a clean image, even Chandi’s rivals would not have believed the charges. Commissions of inquiry and Courts found the charges to be baseless and exonerated him from all cases.

Kerala’s tryst and rendezvous with sex, scandals, and spicy allegations are nothing new. The Marxist-dominated media in the State needs three or four essential ingredients to churn out spicy reports about anybody who matters in public life. Remember the 1995 ISRO spy scandal? It had a fair and fat Mariyam Rasheeda, a Mali woman, Nambi Narayanan, and Sasi Kumaran two leading space scientists, an IPS officer who was infamous for his passion for fat women… A series of ‘stories’ peppered with spicy and steamy incidents which may put Harold Robins to shame figured in Malayalam newspapers and weeklies. Decades later, Cherian Philip, a Congress leader, disclosed to the world that the spy scandal was a ploy by the party faction opposed to K Karunakaran, the then chief minister to unseat from the chair in which they succeeded. While Karunakaran bowed out from political center stage with tears in his eyes, the accused police officer was elevated to the post of the state police chief by the same politicians who were once crying for his blood. India’s quest for cryogenic engine technology continues without success as Narayanan and Sasikumaran opt for premature retirement.

Now, we have Saritha Nair, Swapna Suresh, and a host of other ladies.. The chances of the central agencies reaching anywhere near the truth in the gold smuggling case look bleak as all lawyers appearing for the agencies are Swayamsevaks!