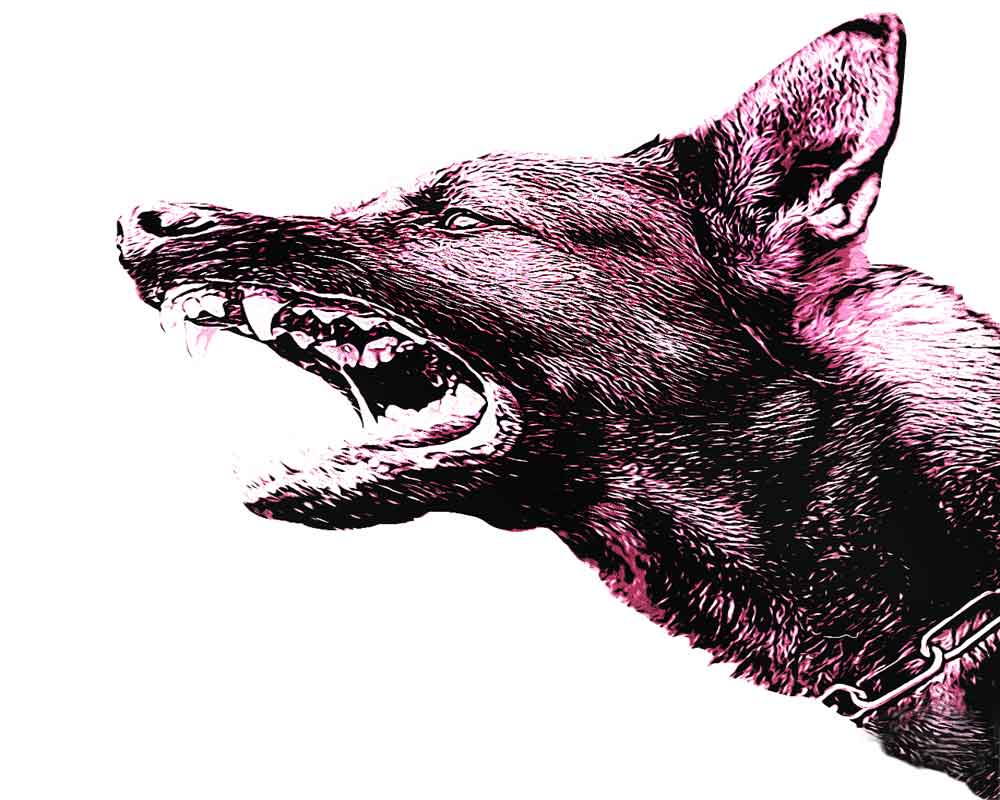 Konrad Lorenz (1903-1989), the author of the best-selling book On Aggression, wrote in Man Meets Dog, "The whole charm of the dog lies in the depth of the friendship and the strength of the spiritual ties with which he has bound himself to man,” writes Hiranmay Karlekar

WWhy do stray dogs bite humans? It is important to find out in the light of several recent reports of their attacking humans.

Three foremost  questions arise at the beginning: Are dogs by nature aggressive and hostile to humans? Is the aggression they sometimes show a response to human oppression and provocation? How does one  reduce the incidence of stray dog bites?

Konrad Lorenz (1903-1989), the author of the best-selling book On Aggression, wrote in Man Meets Dog, "The whole charm of the dog lies in the depth of the friendship and the strength of the spiritual ties with which he has bound himself to man..” Lorenz should know. An Austrian zoologist, ethnologist and ornithologist, and recipient of the 1973 Nobel Prize in Physiology of Medicine along with Nikolaas Tinbergen and Karl Von Frisch, he is regarded as one of the founders of modern ethnology as well as the study of animal behaviour.

To find the reasons for stray dogs biting humans, one must delve into the history and nature of human-dog relationship from the earliest times. According to Lorenz in Man Meets Dog, dogs had already become domesticated at the beginning of the later Stone Age when humans seem to have established their first settlements.  The later Stone Age, also known as the Neolithic age, began around 10,000 BCE, which is 12,000 years ago. The period since then has witnessed the evolution of a relationship which has led dogs to be called “man’s best friend” and the expression, “dog-like devotion.”

Epics, mythology and history offer many examples of dogs’ deep devotion and loyalty to humans. In Homer’s Odyssey, Argus, Odysseus’ dog, was the only one who instantly recognized him as he returned home in disguise after 19 years of warfare and travel. Even his wife, Penelope, son Telemachus, and loyal servant Eamaeus, could not do that.

The fact that in the Mahabharata, Dharma assumed the form of a little brown dog while following the Pandavas in their final journey, is not without significance. Krittibas Ojha’s Bengali translation of the Ramayana, relates how Ram, ruling in Ayodhya following his return from his victory over Ravana, punished, on the complaint of a street dog, a sanyasin for hitting it on the head with a stick. More, the punishment was what the dog had wanted.

In comparatively recent history, Shivaji’s dog, Waghya, who was by his side in every battle he fought, jumped on to his funeral pyre as he was being cremated following his death. Two memorials stand next to each other in Raigad fort—the larger one for Shivaji and the smaller for Waghya.

Dogs are often prepared to die for humans they love. JN Gupta, a member of the Indian Civil Service, was commissioner of Burdwan division in Bengal in the early 1920s. His official residence was at a place called Chinsurah on the Ganges, in which he bathed every day.  One evening, a crocodile moved to attack him. While the others watched in horror from the shore, a stray dog, whom he fed occasionally, jumped on the head of the crocodile. This disoriented the latter so much that Gupta could wade ashore, where the stray dog joined him with a leap. Thenceforward, he became a much-loved member of the Gupta family.

In Drawing the Line: Science and the Case for Animal Rights, Steven  M Wise, founder and president of the United States-based Nonhuman Rights Project, and one of the world’s foremost scholar of  jurisprudence pertaining to animal issues, cited the instance of the primatologist, Roger Fout’s dog, Brownie, diving under the family’s backing  pick-up truck which was about to hit his nine-year-old brother Ed.  He quotes Fout, who was then four years old, as writing subsequently that not a family member “doubted for a while that Brownie had sacrificed her own life to save my brother.”

Protecting children and babies is an instinct with dogs. On 25 May, 1996, the Bengali daily, Aajkaal, published from Kolkata, carried on its front page a report, by Pinaki Majumdar, along with a photograph by Tapan Mukherjee, of three stray dogs guarding an abandoned new-born baby—a girl--near a dustbin in a Kolkata street. They remained there from May 23 night to May 24 morning when they followed her to a local police station to which she was taken by some local people, returning to their own turf only after the baby was taken to a home by car. They had not even gone to look for food in the interim.

In Tumkur, Karnataka, three dogs saved the life of a new-born baby abandoned by its mother in Devarayanadurga reserved forest. According to a report in the Bangalore edition of The New Indian Express of March 10, 2007, a forest department employee had refused to marry the mother, a young girl, whom he had made pregnant. Fearing social ostracization, the mother, accompanied by a person whom the report described as a “care-taker”, went into the forest and delivered the baby. She and the “caretaker,” came away but three dogs from the village, who had accompanied them into the forest, stayed back guarding the baby. Next morning, their barks attracted the attention of a man who had gone to the forest to gather tamarind. He brought the baby back to the village and returned it to the mother after finding her.

The episode had a happy ending. The villagers patted the dogs profusely for saving the baby’s life and resolved to get the woman married to the man who had made her pregnant.

Why do stray dogs bite?

These are just a few examples from the long narrative of warm human-dog ties. Why then do stray dogs bite? The search for an answer takes one to human settlements—cities, towns, villages—in which humans and stray dogs interact and where human and animal psyches evolve. While many stray dogs have referral homes in these that feed and care for them or have animal welfare organisations doing the same, the large—if not overwhelming—majority have to fend for themselves. The search for food takes them to restaurants, roadside vendors of food, shops, homes, and dustbins for left-overs thrown in the latter. They are shooed off, hit or threatened with sticks, or have stones thrown at them at most places. They are left hungry and resentful. Besides, when bitches have puppies, these are often killed or taken away and abandoned somewhere else by people who don’t want them around. Stray dogs react to such acts, sometimes in the form of biting. More, as victims of such aggression they become aggressive not only against the perpetrators but humans as a species. Hence, attacks on people who have in no way harmed them but are humans. It is, as in the case of most other animals, reactive and not instinctive aggression.

On the other hand, attacks on stray dogs reflect the intense aggressiveness inherent in the human psyche. Erich Fromm, one of the most significant social philosophers and psychologists of our time, says in his The Anatomy of Human Destructiveness, “Man is the only mammal who is a large-scale killer and sadist.” He says elsewhere in the same book,

“If human aggression were more or less at the same level as that of other mammals—particularly that of our nearest relative, the chimpanzee—human society would be rather peaceful and non-violent. But that is not so. Man’s history is a record of extraordinary destructiveness and cruelty and human aggression, it seems, far surpasses that of man’s animal ancestors and man is, in contrast to most animals, a real killer.”

According to Fromm, indulgence in destruction and cruelty can always cause “intense satisfaction” to men, masses of whom can suddenly be “seized by the lust for blood. Individuals and groups may have a character structure that makes them eagerly wait for—or create—situations that permit the expression of destructiveness.”  Anyone who knows about the behaviour patterns of German Nazis and Italian Fascists or any communally or racially charged mob, would agree. Animals, on the other hand, says Fromm, “….do not enjoy inflicting pain or suffering on other animals, nor do they kill for nothing.” No dog has committed genocide, which humans done repeatedly in history.

If dogs bite humans, infinitely more numerous humans strike and hurt other humans, not to speak of the innumerable cases when they hit and/or kill dogs. Choruses of alarm go up in the rarest of rare cases in which a dog-bite causes a person’s death. No call for killing all humans is heard when a person kills another. Murder is treated as an aberrant act by an individual and not caused by a human proneness. This is because humans have created the moral and juridical order prevailing in the world. Dogs and other animals may have a very different view.

Let that be. One way of reducing the incidence of stray dog bites will be for most humans to cease treating stray dogs savagely. Simultaneously, their population should be reduced to minimise the scope of their interaction with humans.

The answer lies in implementing the sterilization and vaccination programme as laid down by the Animal Birth Control (Dog) Rules. It provides for the removal of stray dogs for sterilization and vaccination against rabies and their return to the places from which they had been taken. The latter is important. Dogs being territorial, neutered and vaccinated dogs keep un-neutered and unvaccinated dogs away from the area and those carrying out the programme can forget about it and carry on with neutering and vaccinating stray dogs at other areas.

The only effective and humane way

The ABC programme constitutes the only effective and humane method of controlling stray dog populations. In its report, Technical Report Series 931, the World Health Organisation’s Expert Consultation on Rabies, which met in Geneva from October 5 to 8, 2004, states: “Since the 1960s, ABC programmes coupled with rabies vaccination have been advocated as a method to control urban street male and female dog populations and ultimately human rabies in Asia.”

The killing of stray dogs serves no purpose. Dr K.Bogel, Chief Veterinary, Public Health, Division of Communicable diseases, WHO, and John Hoyt, then President, World Society for the Protection of Animals (WSPA), as well as the Humane Society of the United States (HSUS), made this clear in their joint preface to the Guidelines for Dog Population Management released by the WHO and WSPA in May 1990. They stated, “All too often, authorities confronted by problems caused by these [stray] dogs have turned to mass destruction in the hope of finding a quick solution, only to find that the destruction had to continue, year after year, with no end in sight.”

The birth control programme for stray dogs has not taken off in India because municipal and government authorities have done little to implement it.

( The writer  is a senior journalists and author)