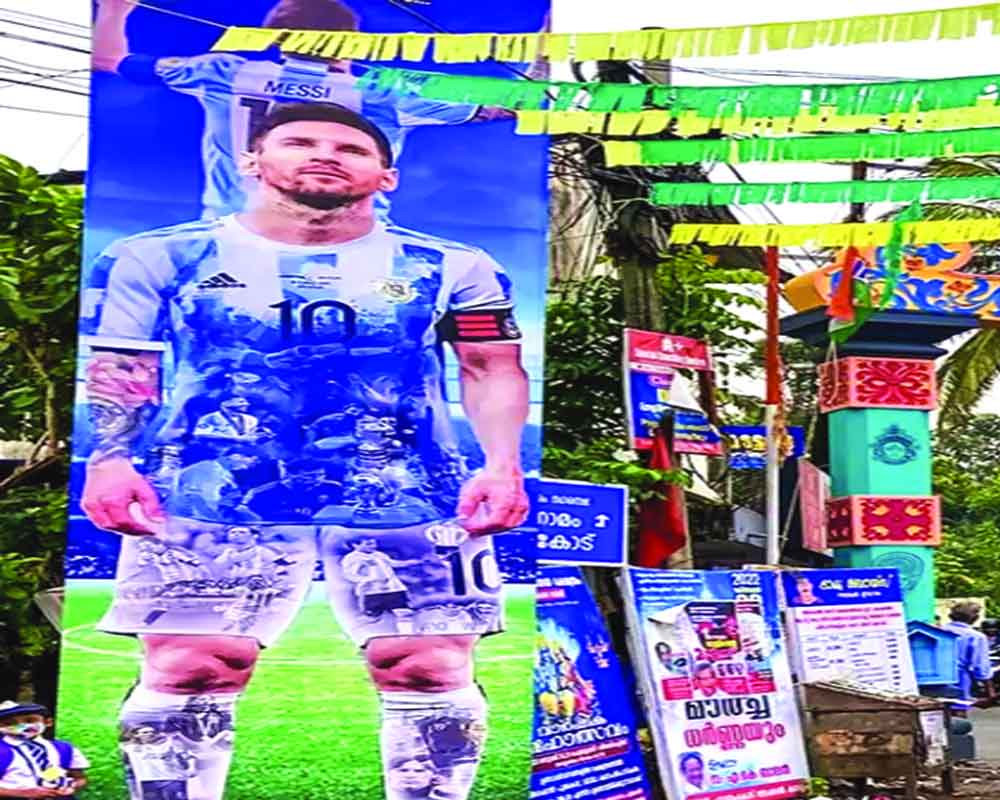 World Cup soccer beginning Sunday  has created quite frey in the Arab world.  Here is a piece by  EDDIE PELLS (AP)  on how Qatar's event denounced for ‘washing' country's image.

Qatar’s decision to launch itself into hosting the 2022 World Cup was a head-scratcher from the start. Why, some wondered, would a Middle Eastern emirate with fewer than

Skeptics say the country wanted to use the prestige of the World Cup, which starts Sunday, to remake its image as a natural-gas producer with a shaky human-rights record.

They viewed the move, which will cost the country some $220 billion, as a classic case of “sportswashing” — using sports as a forum to cast a country or company as different than many perceive.

It is hardly a new concept, and Middle Eastern money has long been a major player. Qatar has extensive international connections through its diplomacy and other efforts. Where many see Qatar and other rich nations spending money to join the global elite, others see nefarious attempts to hide undesired reputations.

“The Qatar World Cup kickstarted discussion about sportswashing and human rights in football and it has been very steep learning curve for us all,” Norway soccer federation president Lise Klaveness said at a recent Council of Europe event.

“There are criteria that have to be kept to, and then it would be better not to award to such states,” minister Nancy Faeser said last month in a move that sparked diplomatic tensions.

Qatar’s leader, Sheikh Tamim bin Hamad Al Thani, has fought back, saying the country “has been subjected to an unprecedented campaign that no host country has ever faced.”

The World Cup is just one way Qatar is using its massive wealth to project influence. By buying sports teams, hosting high-profile events, and investing billions in European capitals — such as buying London’s The Shard skyscraper — Qatar has been integrating itself into international finance and a network of support.

Paris-Saint Germain (PSG) of Ligue 1 is owned by the emir of Qatar. His 2011 purchase came a year after Qatar won the right to host the World Cup. For many, it felt like it was scripted to show that the country has soccer bona fides. Some of PSG’s players are among the world’s most famous — Neymar, Kylian Mbappé and Lionel Messi — and all will be in the World Cup.

Christian Pulisic is the first American to play in and win a Champions League final and he was already a three-time U.S. Soccer Federation player of the year. He is on Premier League team Chelsea, which was owned by a Russian oligarch, Roman Abramovich.

Abramovich was widely hailed as that team’s savior during his 19 years of club control but put the team up for sale this year due to sanctions related to his country’s invasion of Ukraine.

Some of those teams’ best players, including Kevin de Bruyne, Kieran Trippier and Bruno Guimarães, will play for Belgium and England and Brazil in the World Cup.

None of these players, or owners, received the same sort of public condemnation as those in golf who left the PGA Tour to play for LIV. Just as was the case when the soccer teams were purchased, there has never been any mystery about who funded LIV, which has brazenly branded itself as a disruptive force in golf that will change the sport for the better.

According to the CIA, journalist Jamal Khashoggi was killed on the orders of Saudi Crown Prince Mohammed Bin Salman in 2018. The Saudi Public Investment Fund’s involvement became more of a lightning rod when Phil Mickelson said out loud what many already felt.

“They are scary (expletives),” the six-time major champion said in a much-cited interview with golf writer Alan Shipnuck of the FirePit Collective.

Families of 9/11 victims became vocal critics of LIV golf, pointing out Saudi Arabia’s shaky human-rights record and the country’s connection to the attacks.

“Despite (his) being truthful, it’s not good for Mickelson’s image,” said Jamal Blades, a soccer-loving London tech firm manager who occasionally blogs about sports and recently completed his master’s degree in sports business and innovation. “But sportswashing takes place all over the world in some form, where there are people, or governments, or businesses attaching themselves to big and small events everywhere.”

One high-profile advertiser, the U.S. Department of Defense, was looking for some positive publicity and a tie-in with the NFL, but the deal inadvertently triggered a public-relations problem when quarterback Colin Kaepernick took a knee during “The Star-Spangled Banner.”

“When (a company) wants to be the official sponsor of a team or a league, what they are trying to do is create an affinity to improve the reputation of (the company) and get sports fans to think of (that company) in some way other than as a commodified producer of” what that company sells, said Stephen Ross, the executive director of the Penn State Center for the Study of Sports in Society.

Russian leader Vladimir Putin and his Chinese counterpart, Xi Jinping, used the occasion of the Winter Olympics in Beijing to hold a summit and show solidarity this year. Later in those games, IOC president Thomas Bach showed up with Chinese tennis player Peng Shuai to watch Eileen Gu, an American-born freestyle skier who was competing for China, win her first gold medal. Peng’s public appearance came after her safety had been in question for months following her appearing on social media to accuse a former top-ranking Chinese official of sexual assault.

Heads turned when the Asian Winter Games announced it would hold the 2029 version of its event in Saudi Arabia, a desert country that is spending some $500 billion to build a winter resort it claims will be environmentally sustainable. The Saudis have also held golf, tennis and Formula One events in their country despite having little tradition in those sports.

“The Saudi case is almost like the quintessential case of success for sportswashing,” Ross said of the country that led the world by exporting $95.7 billion in crude petroleum in 2020.

Qatar, which also shares the world’s largest underwater natural-gas field with Iran, wanted to get into the act, too.

It hosted world gymnastics and track titles, both of which were preludes to the World Cup, which is costing the country an estimated $220 billion. The country might be banking on the reality that, regardless of the issues that dog a host in the lead-up, most worldwide sporting events are ultimately judged by the quality of the event itself.

The country recruited hundreds of fans to receive free trips to the World Cup in exchange for promoting positive content on social media about the event and the host.

With the World Cup approaching, human rights and corruption allegations have emerged as prime topics, and figure to remain that way until the championship trophy is awarded on Dec. 18.

Whether that’s fair depends whom you ask.