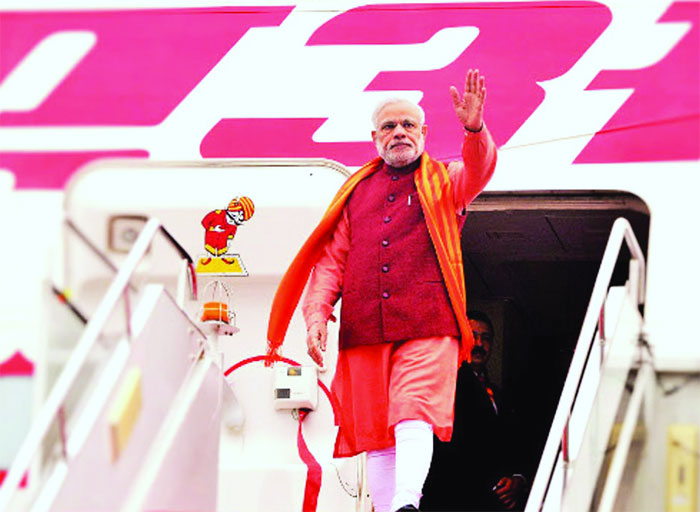 It is encouraging that there has been a rhetorical shift in India’s foreign policy from traditional one’s to a pro-active one, write Harpreet Kaur & Anupam Kumar

India’s foreign policy, ever since independence, remained focused on the principles of peace, non-violence, non-alignment, anti-imperialism, anti-racism, anti-war etc, which are derived from the faith and ideals of human goodness, innate equality of the people, universal brotherhood, unity in diversity and secularism.

However, in recent times, especially since the Narendra Modi Government came to power, commerce, trade and security have taken prominent positions. Not non-alignment but alignment with all has been the maxim of India’s foreign policy and the country is reaching out to to several nations like Fiji and Israel to fulfill its diplomatic needs.

Prime Minister Narendra Modi’s foreign policy is currently focused on improving relations with the neighbouring countries in South Asia; engaging extended neighbourhood in the Southeast Asian region and other major global powers. In pursuit of this, the Prime Minister has made several official visits to countries like Bhutan, Nepal, Japan, the United States, Myanmar, Australia, Fiji, Israel among many others.

Through ‘fast track diplomacy’,   which means adopting a policy that is proactive, strong and sensitive; and ‘paradiplomacy’, where states and cities are encouraged to forge special relations with other countries or federal states of another country or even cities of their interest in order, India has pursued a very dynamic and unique policy to pursue its desired goals. However, the main objective of its foreign policy has been promotion of trade; maintaining security; promoting transit facility among member states; sprucing infrastructure and enabling connectivity etc.

Through ‘neighbourhood first’ policy, more emphasis has been given to our immediate neighbours.  Indeed, maintaining relations with immediate neighbours has been a priority for the Modi Government. India has entered into several Memorandum of Understanding and agreements to encourage cooperation in regional issues like trade, connectivity, infrastructure and transit facility among the member states of the South Asian Association for Regional Cooperation (Saarc).

Simultaneously, New Delhi has also charted on the course of playing a proactive policies in the Indian Ocean Region and the Pacific Islands, which includes Mauritius, Seychelles and Sri lanka. A number of measures to strengthen India’s partnership with the Pacific Islands were proposed.

This included the setting up of a special fund of one billion dollar for adaptation of climate change vis-à-vis clean energy; establishing a ‘trade office’ in India; forming ‘Pan Pacific Islands e-network’ to reduce physical distance between the islands through measures like improving digital connectivity, extending visa on arrival at Indian airports for all 14 Pacific Island countries, space cooperation in space technology applications for improving the quality of life of the islands. Besides, Prime Minister Modi also visited the Central Asian countries to enhance cooperation in areas of security, nuclear energy, economic and trade cooperation.

The present Government has also pursued more proactive policies in regional organisations such as Saarc, Association of Southeast Asian Nations (Asean) and Brazil, Russia, India, China and South Africa (Brics) to create an option beyond the World Bank and the International Monetary Fund for their cooperation and development. The Prime Minister, in his Saarc summit in Kathmandu focused on greater people-to-people contact; better connectivity and commercial linkages within the region. India has also played an important role in Asean and Brics in the recent times.

With the European countries, India has increased collaboration in the cultural, economic, social, technological and military realms. India is promoting its ambitious Make in India programme in a bid to make the country a manufacturing hub in the US, Russia, Germany and China with cooperation in areas of natural resource, trade and terrorism.

Under Arab pressure, India had maintained distance from Israel for decades but it is now seeing advantages in a complementary relationship with Israel. In a historic visit to Israel last month, the first ever by an Indian Prime Minister, Modi added a new chapter in India’s foreign policy. Israel has been a global leader in water and food systems, which are two critical fields that India needs to upgrade. India wants to strengthen its manufacturing base and is looking to do so with technologies coming from Israel. Both countries are working on diamond trading and polishing.

Nonetheless, India has focused much on its security and domestic demand and has not taken into consideration whether other countries are pleased with the fact or are displeased with it. Now Indian foreign policy has moved forward from mere non-alignment to become a prime driver and is acting on the maxim of being non-aligned with any big powers to novel policies of exhibiting alignment with all or extending friendly gesture to, irrespective of their size and economic and military power. And focus has been on strengthening trade and defence ties with all countries. This is imperative at this point of time, for propelling forces today are primarily economic and aim at maintaining security.

Through ‘fast track diplomacy’ and ‘paradiplomacy’ which is proactive, strong and sensitive policy and where states and cities would be encouraged to forge special relation with countries or federal states of another country or even cities of their interest in order, India has been on the right track to pursue its desired goals.

We have moved forward from our traditional foreign policies, namely Non-Aligned Movement and Panchsheel treaty to a more proactive trade and security-oriented foreign policy. ‘Act East’ policy, ‘neighbourhood first’, ‘link West’ and ‘Connect Central Asia’ policy are practical manifestations of it. The paradigm of the world order has changed completely today with the end of colonialism and disintegration of Union of Soviet Socialist Republics and the world today is not strictly bipolar or unipolar.

Hence, it makes sense to approach nations, big and strong, with open arms in the pursuit of the interest of the nation. Globalisation and liberalisation are the realities of the present times and India is currently more focused on crucial areas like trade, economy, energy, security, terrorism.