Man behind the magician

Man behind the magician 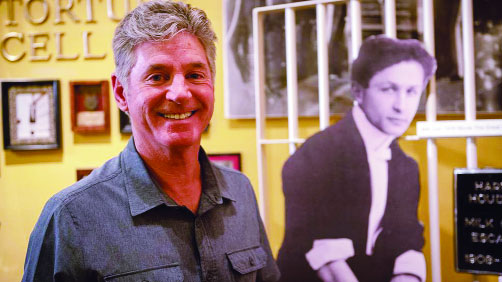 George Hardeen, the great-nephew of magician Harry Houdini, delves into the history of his uncle in a new series

Growing up, George Hardeen never thought too much about being related to arguably the most famous magician of all time, whose name is synonymous with great escape.

But at 66, the Arizona man is delving into the history of his great-uncle Harry Houdini in a journey at the heart of a new series on the Science Channel.

“We spoke to many collectors and historians. These guys live Houdini all the time,” Hardeen said. “They know more about Houdini than I will ever be able to.”

Houdini’s Last Secrets, which begins airing on January 6, follows Hardeen as he and escape artist Lee Terbosic explore the engineering behind some of Houdini’s most legendary feats.

The Hungarian-born illusionist, who came to the U.S. as a child, generated headlines in the early 1900s for escaping from handcuffs, straitjackets and even a milk can.

Each of the four episodes focuses on a different stunt, including being buried alive and the water torture cell, in which Houdini was lowered upside down into a water tank with his feet locked in stocks. A stunt builder constructs the props, and Terbosic re-enacts the stunts.

“No one knows how Houdini did the tricks. So, we pondered it and came up with our own methodology so that Lee could perform the trick,” Hardeen said.

Wyatt Channell, a Science Channel executive producer, said Houdini knew how to create a persona and hold people’s interest but the programme tries to look at him from a different perspective.

“Everybody thinks of him as an escape artist, illusionist and magician. But there was a ton of engineering behind what he was doing,” Channell said.

The production company approached Hardeen about a year ago.

“I think, in many ways, the show is George’s journey,” Channell said. “George is really the one, as the everyman, asking the questions we all are wondering — How Houdini did these things.”

It also touches on other questions, such as whether Houdini could have been recruited to be a spy. For that, Hardeen interviewed John McLaughlin, former acting director of the CIA and a lifelong magician and Houdini fan.

Hardeen’s grandfather Theo Hardeen was Houdini’s younger brother and an illusionist in his own right. George Hardeen’s father didn’t tell his son about his magical lineage until he was about 10.

“My sister found a piece of mail that came addressed to my dad, Harry Houdini Hardeen. He always went by Harry H. Hardeen,” Hardeen said. “That’s when he basically told us.”

The show has helped Hardeen learn more about the man behind the magician.

Houdini, who died on Halloween 1926 at 52, and other family members had an incredible work ethic and aimed to be the best, Hardeen said. Houdini ran 10 miles (16 kilometers) a day to keep his body in peak shape but also was a hoarder with a compulsive side, he said.

“It jibes with stuff my dad told me,” said Hardeen, a communication consultant for an Arizona utility.

The show brought him to the House of Houdini, a museum in his ancestral home of Budapest, Hungary, where he hopes to take his three children.

His youngest daughter, Shonie Hardeen, said she would love that opportunity. The 24-year-old from the Arizona mountain town of Flagstaff said the show has increased her interest in her dad’s family and Houdini.

“Some people are from Europe, and they can’t pinpoint it. I guess it’s easier for my family to figure out stuff because he’s been written about for so long,” Shonie Hardeen said.   —AP