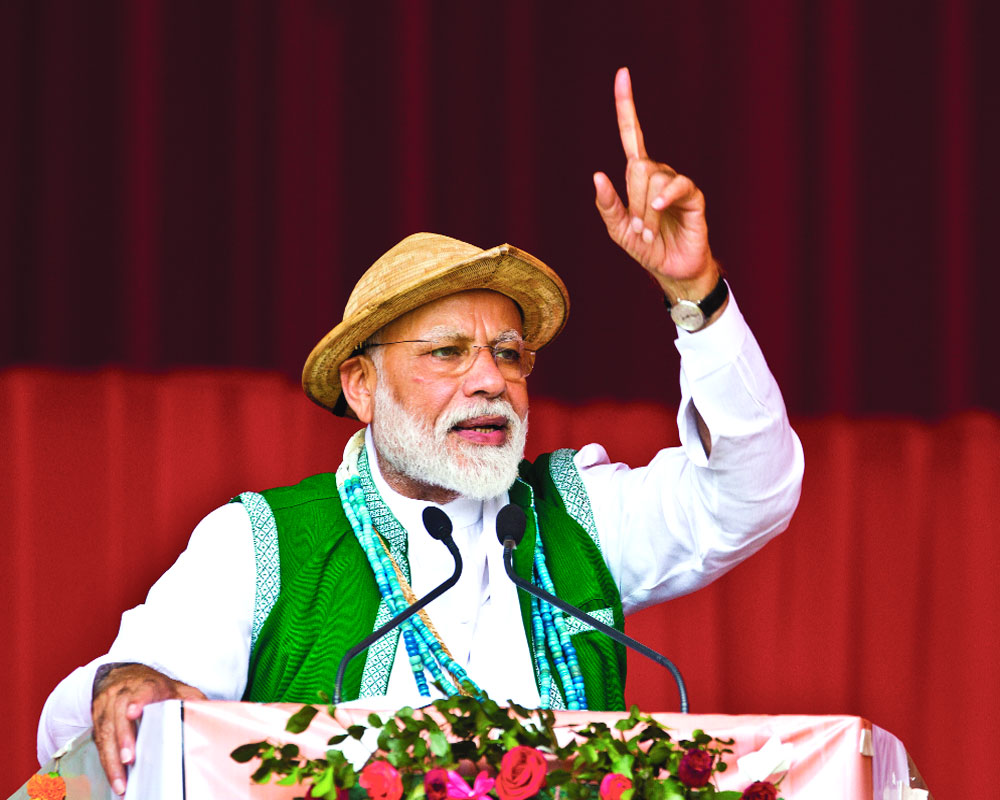 No Indian election, at least in these days of intensely competitive politics, is ever really won until the last vote is counted. Yet it is commentary on the state of play, some two weeks before the first round of voting, that some Opposition leaders are actually claiming that this will be last democratic election in India in the event Prime Minister Narendra Modi is re-elected to power.

The suggestion is, needless to say, quite preposterous. It implies that India’s democratic Constitution is on the verge of being junked. Strangely, overhauling the Constitution hasn’t been an issue in this campaign so far and so far as I can make out, it is unlikely to be raised by anyone in either the Government and the Opposition. What the ridiculous alarmism about 2019 being the last time people vote for a Government actually means is that a section of the Opposition has, in effect, conceded the election to Modi.

If that is so, it amounts to a dramatic turnaround. Even as late as January 19, the day Mamata Banerjee used a mass meeting in Kolkata to showcase the unity of the anti-BJP forces, it appeared that Modi and the BJP had hell of a fight on its hands. Indeed, there was a distinct impression in some circles that a combination of the SP-BSP alliance in Uttar Pradesh, the strength of the DMK-led alliance in Tamil Nadu and the overwhelming dominance of Mamata Banerjee in West Bengal would ensure that Modi would be deprived of a clear majority in the Lok Sabha.

Today, after Balakot and Operation Shakti and the relatively smooth seat-sharing arrangement involving the BJP and its other NDA partners, there is a definite impression that Modi is on his way back for a second term. The Opposition certainly seems to sense this tilt in favour of the incumbent, a possible reason why its rhetoric is getting more and more shrill with each passing day. First there were all those expressions of puerile insolence over the Balakot airstrikes that made it seem that the Opposition leaders were somehow out to rubbish the Indian Air Force and bat for Pakistan. And last week, by trying to undermine the significance of India’s ASAT advance, the Opposition just appeared churlish and petulant. A more gracious response to both these incidents centred on national security would have made the Opposition — and at least the Congress that has a rich experience of being in Government — look responsible. Now, Modi’s taunts about the anti-BJP forces being more obsessed with its hatred of the Prime Minister than with national security appears all too relevant. The Opposition may have bolstered its anti-Modi credentials handsomely but its credentials for giving India a responsible Government has suffered a body blow. Whether it is able to recover from the consequences of needless negative posturing will be worth monitoring.

The Opposition’s unending negativism, even at the cost of national sentiment, has given Modi the ammunition for aggressive campaigning. Modi’s campaigning can broadly be divided into two parts. The first, which covered some 150 constituencies and happened before the election schedule was announced, focussed principally on the achievements of his first term and only tangentially on the shortcomings of the Opposition. The present round, which began in Western Uttar Pradesh, and is expected to cover another 150 constituencies, will be more focussed on enthusing his support base and will be more aggressive. However, what seems interesting in both phases is that Modi exudes total confidence. He is not defensive, not even remotely, and the tone is that of a Prime Minister who expects to be re-elected.

Whether this high level of confidence is warranted or not is not the point. What matters is that the optimism and the expectation of victory should be transmitted to his supporters on the ground. This is where the aggression is important. Modi could have chosen to be prime ministerial and exuded quiet confidence. The danger of this approach is that it could breed complacency among the NDA supporters, lead to a fall in turnout and cost the ruling side some marginal seats. It was this over-confidence that was a factor in the NDA’s loss in urban areas in 2004, a loss that cost Atal Bihari Vajpayee his prime ministership. Both the BJP and Modi have learnt from this experience.

However, the issues are not merely tactical. One of the reasons Modi exudes confidence is not merely because the alternative looks grim and Indians are loath to experiment with instability. There is a very high measure of satisfaction, both within the party and among its support base, at performance of the Modi Government. There has been a conscious attempt to create a network of beneficiaries of schemes such as Mudra, Ujala and Swachchh Bharat. In particular, there is a belief that there is silent support for the schemes from women. If this happens, the outcome could be quite dramatically in favour of Modi.

These are the imponderables. What is relevant at this stage is that Modi has a coherent narrative that appeals to his faithful supporters. A couple of regional parties apart, the Opposition is still trying to weave together its story line.