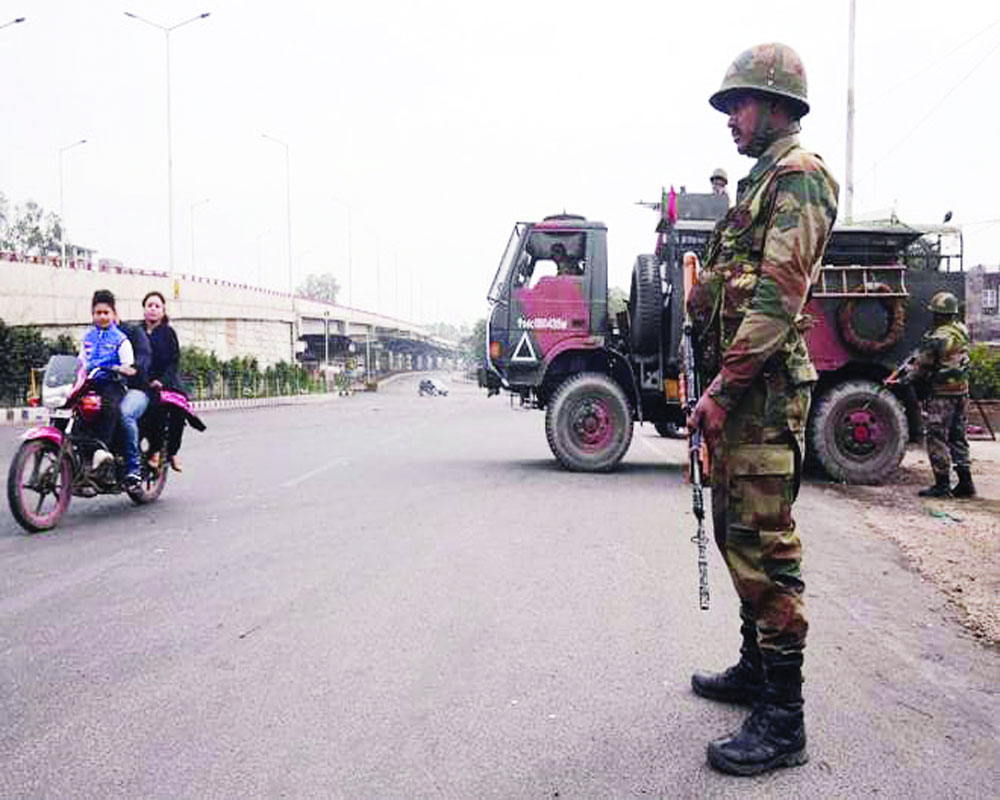 Article 35A of the Constitution protects any laws in Jammu & Kashmir relating to the definition and privileges of permanent residents from being challenged as discriminatory or unconstitutional. As an example of these privileges, Jammu & Kashmir restricts anyone except permanent residents from acquiring immovable property. Article 35A grants the State Legislative Assembly the power to make such a restriction and prevents any challenge against this on the basis that this is inconsistent with the laws that apply to other citizens of India.

Several political and defence analysts attribute the instability in Jammu & Kashmir to India’s inability to fully integrate the State into the Union. The challenges towards such integration have historical roots, dating to the circumstances under which the State, led by Maharaja Hari Singh, acceded to India, following Pakistan’s attempts to annex the State through force.  Pakistan has also pursued the “bleeding cuts” theory, consistently providing support to terrorist and separatist movements in Jammu & Kashmir and extending such support to promote terror in other parts of the country to further  its own interests. The third factor is the imposition of Article 370 in the Indian Constitution and the addition of Article 35A, through the provisions of Article 370.

Article 35A was incorporated under Article 370 through a Constitutional order signed by former President Rajendra Prasad in 1954. Sixty-three years after Rajendra Prasad signed the Constitutional order bringing Article 35A into existence, its validity is being questioned because there is a complete change in the political architecture of the State and unrest in the Valley fuelled by the Pakistani establishment in the name of religion since many decades.

A Constitutional order is essentially an expansion of an existing provision that does not need to be voted on, or need the approval of the Parliament. Article 35A was included in the Constitution through a presidential order and not with the Parliament’s approval.

What is the relevance of Article 370 to this debate? Prior to accession, the ruler of the princely State of Jammu & Kashmir, Maharaja Hari Singh, was in total control of all matters of administration and governance except defence, foreign affairs and communication, which came under the British. At the time of independence, Maharaja Hari Singh, albeit under pressure from tribal insurgents, chose to accede to India but agreed to sign the Instrument of Accession as long as the same arrangement was allowed to continue.

It must be noted, however, that Article 370 was stipulated in the Indian Constitution as a temporary provision. In the 60 years since, Jammu & Kashmir continues to enjoy its special status but its autonomous nature has eroded considerably. Over the years, the Reserve Bank of India and the Supreme Court have extended their jurisdiction to the State. A more recent and relevant example, however, is when India awoke to a brand new taxation system on the midnight of July 1, the State of Jammu & Kashmir stayed out of it. The latter came under a new tax regime a week after the Jammu & Kashmir State Assembly passed a resolution accepting the Goods and Services Tax, which was then formalised with a presidential order passed by the then President Pranab Mukherjee.

Article 35A violates the very concept of equality enshrined in the Constitution of India. Its treatment of non-permanent residents of Jammu & Kashmir is akin to treating its own people as second class citizens. The provisions of Article 35A also violate the principles of gender equality. Section 6 of the Constitution of Jammu & Kashmir, which derives its power from Article 35A, discriminates against women residents of the State, who marry a person from another State. The children from such unions are not entitled to the Permanent Resident Certificate (PRC) or the benefits accruing from it, such as the right to acquire immovable property and a Government job. The same, however, does not apply to the offspring of a male who marries a woman from another State.

Article 35A is in the limelight nowadays. There are two views prevalent in the country — one in its support and the other against it. This matter is sub-judice in the Supreme Court of India. The Kashmiris feel that scrapping Article 35A would prejudice their identity as a Kashmiri and would disturb their privacy in the State. Farooq Abdullah, National Conference leader, says, “If 35A is abrogated, the revolt is going to be bigger.” The other view, comprising the ruling party BJP and its supporters, believes that Article 35A should be scrapped to strengthen the unity and integrity of the nation. Article 35A is a symbol of “Kashmiri colonialism” over the rest of Jammu & Kashmir, they argue.

But there is a growing sentiment to relook at Article 370 and Article 35A. There will be violence instigated in the Kashmir Valley when the nation takes recourse to such action, but that cannot, and must not, deter the State from preserving the right to equality, enshrined in the Constitution. For the good of the people of India and for the residents of Jammu & Kashmir, Article 35A must be repealed forthwith as it will pave the way for the development of the state and its total integration with the union.

The Lok Sabha 2019 verdict, which gave Modi a massive second mandate, and his subsequent decision to allocate the Ministry of Home Affairs to his deputy Amit Shah, have predictably set off apprehensions. After all, Shah has been nothing short of belligerent in voicing his views on Articles 370 and 35A, and how these “special” Constitutional provisions have been an impediment to the progress of the Kashmiri people. The BJP election manifesto, jointly released by Prime Minister Modi and Shah ahead of the blistering poll campaign they crafted together, clearly lays out the party’s position and intent: “In the last few years, we have made all necessary efforts to ensure peace in Jammu and Kashmir through decisive actions and a firm policy. We are committed to overcome all obstacles that come in the way of development and provide adequate financial resources to all the regions of the state. We reiterate our position since the time of the Jan Sangh to the abrogation of Article 370. We are committed to annulling Article 35A of the Constitution of India as the provision is discriminatory against non-permanent residents and women of Jammu and Kashmir. We believe that Article 35A is an obstacle in the development of the state.”

Now both Modi and Shah face their biggest challenge yet of translating this promise into reality and negotiating many anxieties and sensitivities along the way. Notably, after Partition, Jammu and Kashmir’s prime minister Sheikh Abdullah carved out 30 seats for the Jammu region, 43 seats for Kashmir region and two seats for the Ladakh region. At present, the Assembly has 87 elected seats with Kashmir having 46 seats, Jammu 37 and Ladakh four. The BJP is hoping that since Jammu has more area than Kashmir, it would get more seats under delimitation than Kashmir. According to the 2011 census, the total population of Jammu region was 53,78,538 of which Dogras are the dominant group, comprising 62.55 per cent of the population.

The Modi 2.0 Government would like to correct the regional imbalance based on the area, population and proportionate assembly representation to solve the Kashmir riddle.

(The writer is Editor-in-Chief, Opinion Express)