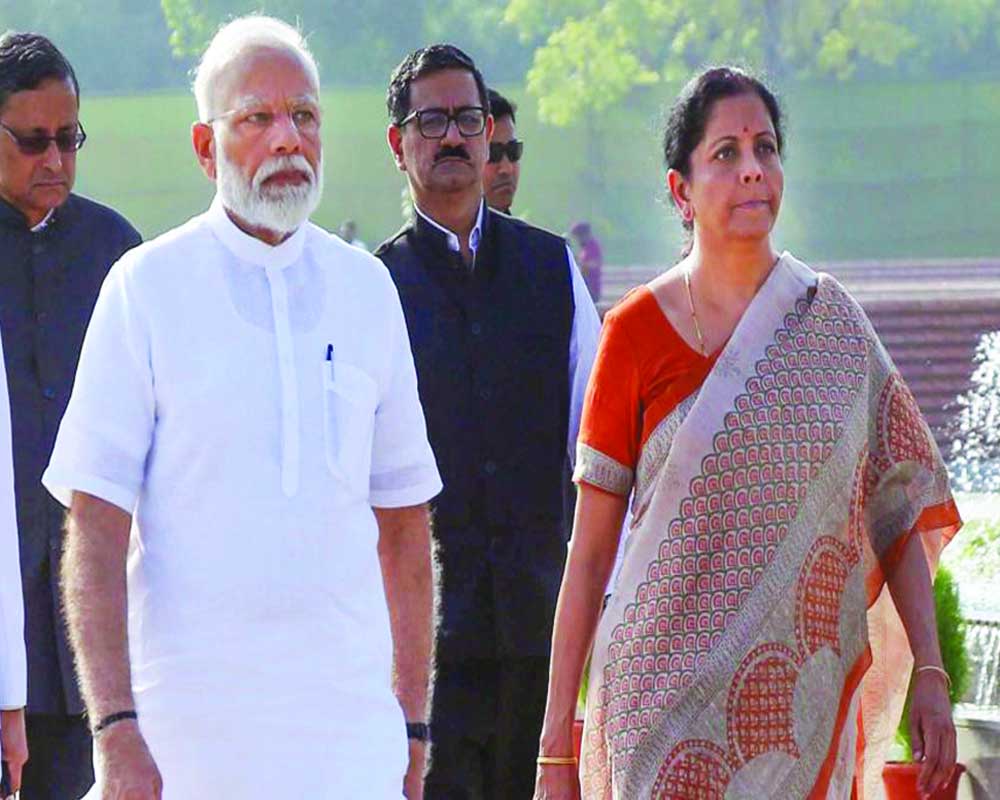 Instead of adopting a reactive stance to economic challenges, Modi 2.0 should get more proactive to attain the dream of a $5 trillion economy. The first step is to enthuse India Inc

In this article, I have divided my view into two parts. In the first, I have asked why the super-rich must pay their fair share in nation-building and other avenues to raise future revenues. The second half is a plea to facilitate and enthuse the industry instead of throttling India Inc, the golden goose that pays taxes and creates jobs.

“Gandhiji’s trusteeship principle stated that legitimate profit earnings cannot be devoid of social responsibility.” This means individuals, who are recipients of windfall gains unprecedented in the economic history thus far, must pay their fair share of progressive taxation on income — whether it’s the highest high net worth individuals (HHNI), the affluent farmers or CSR non-compliant companies. The Indian economy is in a “negative uncharted territory” with fewer avenues left to collect revenue. Perhaps it’s time for the Government to even think of taxing big-tech internet companies, unafraid of US President Donald Trump’s tantrums, by taking a leaf from the French Government. France became the first country to approve a three per cent tax on local revenues (instead of taxing only profits) from US tech giants. Japan and Singapore are expected to follow suit.

While super-rich individuals are obliged to pay higher taxes relative to their income, the converse is also true that India needs to enthuse entrepreneurial spirit to realise its distant dream of becoming a $5 trillion economy. It must remove the impediments to its growth. This can start with the lowering of corporate taxes on the 6,000 largest firms, who continue to be taxed at 30 per cent, as compared to 17-21 per cent in the developed countries in next year’s budget; firmly admonishing overzealous tax officials to stop tax terrorism; addressing liquidity crunch that has bought credit supply to a standstill; and fuelling a virtuous cycle of consumption. Till economic activity does not revive on all cylinders, neither will jobs, savings or Government’s revenue improve from the current six per cent.

With dismal economic data on sectoral losses due to contraction in investments, consumption and external demand coming to light on a daily basis, there is a prevailing sense of déjà vu that presages a 2008-like economic crisis. Each day, post the budget, the Sensex has chipped away a few hundred points. This has been attributed to the 9,400 Foreign Portfolio Investors (FPI) pulling out a net of Rs 11,000 crore in July from the Indian markets in a tantrum response to the surcharge on the super-rich. Policy interventions are desperately needed to ring-fence specific FPI’s trust entities through the directive under Section 119 of the IT act as their exodus has weakened market sentiments, affecting retail investors and not only HNI’s. Once resolved, considering the earning opportunities in India, this is a temporary phase as FPIs will ultimately return and increase their holdings as valuations turn more attractive once the markets bottom out.

As the Budget did not increase the tax burden on the middle classes, the surcharge specific to individuals was one avenue for the Government to mobilise revenue for its welfare schemes. Across developed nations, the ultra-rich, 0.01 per cent of the likes of Bill Gates, Warren Buffet and big-tech companies, are volunteering to pay higher taxation, proportionate to their windfall gains.

Second, there is a moral quotient involved herein where philanthrophic instincts in India are so minimal that the Government had to make Corporate Social Responsibility (CSR) mandatory under Section 135 of the Companies Act in 2013. Despite making two per cent of profits earned over an average of three years compulsory, many profitable industries remain non-compliant as per the latest findings by the Comptroller and Auditor General of India (CAG). The rich are now getting richer with sharper increases in the value of their personal wealth, relative to national per capita income and savings. India today struggles with a Gross National Income (GNI) of around $2,000 per capita as compared to China, with a GNI per capita of $9,800.

To widen the tax net, the Government must find ways to tax the rich farmer. The CAG found that agricultural income of nearly Rs 500 crore was allowed as exemption in 2017-18 by the income-tax authorities without adequate verification. The TARC had recommended that farmers with agricultural income of Rs 50 lakh plus should pay income tax. As the decision to levy a tax on agriculture income lies with the State Governments, this can be imposed only if they pass a resolution under Article 252 of the Constitution, authorising the Centre to do so.

One grants that Governments cannot have a “rob from Peter to pay Paul attitude” towards the rich, nor resort to oppressive tax terrorism — a pre-existing malady of the IT department from the UPA era. In the case of the tragic suicide of Cafe Coffee Day founder VG Siddhartha, what warranted the attachment of assets prematurely when the assessments were incomplete and his business needed to monetise assets to repay debt? Businesses fail but failure cannot be criminalised. This has made India Inc unite in venting suppressed anger at using coercive measures to raise arbitrary demands by assessing officers, forced to meet unrealistic targets upon which their appraisals are based.

Consider this factoid that the IT department is the biggest litigant with a petition rate of above 80 per cent and success rates of under 30 per cent. In its haste to cleanse the system, is the Government failing to distinguish between genuine business failures and wilful defaulters and tax evaders, who previously gamed the system?

These are challenging times and what the business community needs are predictability, stability of policies and sustained dialogue with the Government to recalibrate policy. The Indian economy was driven by the twin engines of growth: Domestic consumption and Government-funded public investments — both of which need expansionary monetary and fiscal stimulus. Further, newer incentives are needed for the dwindling export sector as de-globalisation has hurt exports due to protectionist policies of the West. Besides, while Phase I of the globalisation relied on outsourcing from low-wage countries, in Phase II, that wage-arbitrage has narrowed with only 18 per cent of the global goods currently traded involving exports to higher-wage countries. Key enablers for global competitiveness are rationalising power tariffs, labour and land laws.

Lastly, the build up of toxic assets in the banks has hampered their ability to lend further. The much-needed liquidity infusion of Rs 10,000 crore must find its way into priority sector lending by providing credit for MSME’s, automobile, retail and housing finance companies to lend for affordable housing — all of which will raise the Gross Domestic Product (GDP). Because India’s $2.7 trillion economy needs real growth rates close to nine per cent if we have to reach the $5 trillion-mark by 2024-25.

The other great worry is the rise of leverage in sovereign, personal and corporate debt globally with the national average debt of advanced economies surpassing 100 per cent of the GDP. Easy credit in the past fuelled asset bubbles in stocks markets and the housing sector, presaging recession, which lasted longer and made deeper cuts. Government borrowings through sovereign loans at low interest rates could become a dangerous practice of relying on cheap loans to continually fund populist schemes. Though sovereign borrowings bring money into the economy at lower interest rates, it is important “monetary policies support growth, without the risky build-up of leverage”.

Modi 2.0 will hopefully get more proactive instead of a reactive stance to economic challenges as even remedial policies take a minimum of six months to kick in. The first step is to enthuse India Inc, the golden geese that lay the golden eggs.

(The writer is an author, columnist and chairperson for the National Committee for Financial Inclusion at Niti Aayog)