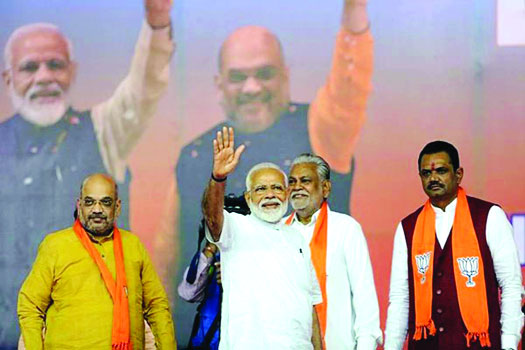 NDA 3.0 is all set to dramatically alter the course of Indian politics as also the economy. The Modi-Shah duo should accord greater primacy to issues of governance over politics

2019 is a watershed year — a definitive inflection point in reshaping the country’s political history. Prime Minister Narendra Modi’s popular mandate signifies two dominant trends transforming the political landscape here on. First, there is a fading appeal of political parties who built their capital on pseudo-secularism. Asymmetric appeasement of the 20 per cent minorities in preference to the majority community, which comprises 80 per cent within their own country, will no longer hold. Second, it signals the decimation of self-serving, venal and nepotistic dynasties who held a monopoly on Central as also regional power and governance for far too long.

Modi’s successive win stems from a groundswell of Hindu consolidation as the Bharatiya Janata Party’s (BJP) vote-share rose from 31.3 per cent in 2014 to 37.4 per cent in 2019. This brand of “muscular nationalism” finds its echo in global trends prevalent in the UK and the US. Just as Brexit signalled the voice of Britain that sought to revive its grand narrative, or a Trump’s “America First”, Modi’s return signals the resurgence of majoritarianism that seeks to dismantle and de-colonise the elitist mindset of previous regimes.

The Western media tried hard to sabotage pre-election opinions, peddling fears that the return of India’s “divider-in-chief” augured a regressive, illiberal and totalitarian regime. What Western lobbyists and Lutyens’ intelligentsia missed was gauging the zeitgeist right, the popular mood of the moment. And that mood perceived Modi as a unifier, whose social uplift schemes had permeated across strata, even if it meant taking a tough stance on the regressive practice of triple talaq. Secularism, defined the Modi 2.0 way, veers at moving away from the parivar’s ideological moorings to turn more mainstream and inclusive. This means subsuming the networks of vote-bank politics and replacing it with antarodya, delivering economic uplift to the last man in the line.

While it’s easy to praise the victor, existential challenges lie ahead for the Modi-Shah duo at the helm of governance to win the economic battle with the same fervour as the BJP won the political battle. Winners don’t need free advice. As champions of political wizcraft, Modi and Shah know better that the speed with which the Government of India handles economic headwinds will be crucial to how history will judge Modi’s ultimate legacy.

Politically, the dominant takeaway is how Modi’s overwhelming mandate impacts the Congress, regionals parties as also vests the BJP with greater power to ignore tantrums of mercurial allies like the Shiv Sena and the Janata Dal (United) here on. First, the electoral outcome has slayed every dynastic fief: Lalu and company, gone with the wind. Pawar and company, stung by the debacle. Mahagathbandhan experiments done and dusted. Most importantly, the capitulation of the Congress after successive Lok Sabha debacles demolishes an entire eco-system of the Lutyens’ club of fixer-cronies and lobbyists for 5+5 more years. Which means meritocracy is here to stay — whether it is in politics or business deals.

Five more years of exile from power for the Congress could mean “five boring, long years of whining, lying and buck-passing” if the party does not reinvent itself and continues to function as a negative Opposition. With the grand old party at its nadir, the Congress could well splinter into further factions as it did with the exit of the Nationalist Congress Party (NCP), Trinamool Congress (TMC) and YSR Congress Party when strong regional leaders rejected the high-command culture even as the contagion of disarray within the party continues to spread to every State unit — from Telangana to Punjab. In hindsight, had the NCP+TMC+YSR not broken away from the Congress years back, notionally, the combined tally in the current Parliament of all four constituents stands at 52+22+22+5 = 99 seats. Which means the break-away factions over 20 years have chipped away nearly 50 per cent seats from the grand old party.

The expected State-wise aftermath of the ‘TsuNaMo’? There are multiple possibilities near-term and over the next one year. Imminent ramifications are that it could lead to the collapse of two recently formed Congress Governments in Rajasthan and Madhya Pradesh and the coalition in Karnataka as all three are on fragile ground with Congress Chief Ministers struggling with factionalism. In Karnataka, it’s a wait and watch game for the BJP as to how and when it makes a bid for power to topple the minority Government. The BJP retains the Modi momentum, having won 25 out of 28 seats in the State with a large chunk of OBCs and Vokkaligas making a big saffron shift.

Second, if the Modi wave retains its velocity, it could have a cascading effect on Maharashtra elections slated later in the year and yield a big win for the party in Delhi elections next year.

Third, the exponential growth of the BJP’s vote-share in Bengal — from 21 per cent in 2014 to 40.5 per cent in 2019 — reflects the untapped potential for Hindu consolidation in a State that has an above-national average Muslim population.

Tapping into economic discontent will be a major poll plank as the TMC failed to attract investment in the State, nor did it support Tata Motors for the setting up of a plant in Singur, which has huge employment generation potential. Mounting MLA defections signal ominous trends for the 2021 Bengal elections with the BJP targetting 250 seats. This has left a nervous TMC to go back to its drawing board to plan ahead by signing up political strategist Prashant Kishor, who recently helped YSR Congress sweep Andhra Pradesh.

In the politically crucial State of Uttar Pradesh, the TsuNaMo has convincingly decimated regional parties — Samajwadi Party (SP) and Bahujan Samaj Party (BSP) — for the second time in Lok Sabha elections, bringing an end to the divisive politics of the Mandal era. The voter has shown that it has little patience with the revolving door regimes of feudal cult-based organisations like SP and BSP. Because both parties are perceived as nepotistic, corrupt, they now have a diminishing appeal among Yadavs and aspirational Dalits. This was reflected in the BJP’s vote-share rising to 50 per cent in 2019, while the SP-BSP’s share languished at 20 per cent.

That the BJP now has on board parties like the Telangana Rashtra Samithi (TRS), YSR Congress Party, Biju Janata Dal (BJD), which have been offering unconditional support, augurs well for Centre-State relations turning more cooperative than combative. As the victor, Modi’s stance is expected to be more accommodative towards these neutral parties in order to gain political goodwill from States not governed by the BJP. Strategically, YSR’s 22 MPs in the Lok Sabha could act as a buffer to counter future pressures from the Shiv Sena and JDU.

NDA 3.0 is now in an unchartered territory to dramatically alter the course of Indian politics as also the economy. One reckons that the pragmatic Modi-Shah duo will accord greater primacy to issues of governance over politics, having raised the benchmarks of voter expectations. Consequently, voter criteria by the next elections will no longer be determined by caste but would be subsumed by the quantum of deliverables on housing, health and education. As the Government gears up for India@75 by 2022, Modi 2.0 would target to showcase its achievements at mid-point of his tenure. Personally, I am optimistic to expect that premature surprise from the present regime.

(The writer is an author, columnist and Chairperson for the National Committee of Financial Inclusion at Niti Aayog)