The hand that steadies the cradle

The hand that steadies the cradle 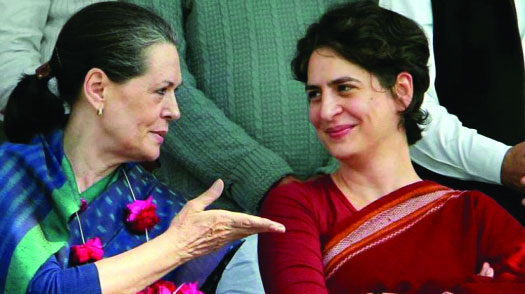 Sonia Gandhi may be toying with the idea of retirement from politics but the Congress needs her on many counts — to bridge the new and old guard, negotiate with the Opposition front and chaperone Priyanka in the post-Pulwama scenario

All set to win her sixth Lok Sabha election since 1999, the 72-year-old Congress matriarch Sonia Gandhi is far from her long speculated retirement. Rumours have been doing the rounds for the past year that she was ready to hang up her boots from active politics due to her ill health and also to give space to her son. It was said that since she has handed over the baton to her son Rahul Gandhi and also inducted her daughter Priyanka Gandhi Vadra in active politics, the time was ripe for her to bow out.

Sonia herself indicated her retirement as early as December 2017 when she declared, “My role is to retire.” Though she has been keeping a low profile since then and taking a back seat, her role, as the final arbitrator in case of any dispute in the party, remains unquestioned. Many expected her not to contest the Lok Sabha elections this time. Contrary to this, her name was in the first list of candidates from Uttar Pradesh. Her candidature from Rae Bareli proves that the Congress cannot do without Sonia for some more time, as the party believes that she can still pull the votes.

Sonia has been toying with the idea of complete retirement from politics since she turned 70 in 2016. She is said to have shared her plans with those close to her.  However, the party kept pressuring her and delaying her plans until Rahul Gandhi stabilised himself as the party chief. For the past year and more, she has stopped meeting party leaders and directed those who called on her to Rahul. Her public appearances have reduced drastically over the past year. She did not campaign in the five  Assembly polls last year. Her last election rally was in Hyderabad before the Telangana Assembly polls in December. She has withdrawn herself completely from day-to-day party activities. However, the post Pulwama and Balakot airstrikes and the current political situation have forced her to change her plans of retirement and hence her re-nomination from Rae Bareli.

Sonia Gandhi has grown from the political novice that she was in 1998, when she took over the party, to become the party matriarch today. She has emerged as one of the tallest national leaders and has found a niche for herself in the party as well as in the national scene. She has been the longest party president for 19 years. The party won the Lok Sabha elections in 2004 and 2009 under her leadership. She is seen as the binding force to keep the party united. The Congress is banking on her experience and mature guidance to keep a balance between its young and old guard. The pressure from the old guard was also one of the reasons for Sonia’s contesting elections as the latter is still not comfortable with the new set-up. Though Rahul has accommodated the old guard, they feel that a new group, consisting of Sam Pitroda, the party’s data analysis department chairman Praveen Chakravarty and Jairam Ramesh, have taken over decision-making leaving them to watch helplessly. The old guard is aghast at their tall claims like training seven lakh booth level workers in about three weeks.

Sonia’s retirement plans were never final. Even at the time of handing over the party in December 2017,  Congress chief spokesperson Randeep Surjewala said that Sonia would only retire from her role as party president and not from politics. “Her blessings, wisdom and innate commitment to Congress ideology shall always be our guiding light,” Surjewala posted on Twitter.

Second, her role in dealing with other Opposition parties is important as leaders like Sharad Pawar, Mamata Banerjee, Sitaram Yechury and others still respect her. Many alliance partners and prospective allies would prefer to negotiate with her rather than Rahul Gandhi.  Her ability to put together the UPA in 2004 and 2009 are proof of her negotiating skills. Therefore the party would like her to play the role of cementing alliances, before as well as after the ensuing elections, given her equation with senior leaders of several parties and her political stature.

Third, she has just launched her daughter Priyanka Gandhi Vadra in active politics. Her dramatic entry was interrupted after the Pulwama and Balakot airstrikes. Though there were rumours that Sonia would retire and Priyanka would contest from Rae Bareli, it now appears that Priyanka would only work for the campaign and build up the party. Priyanka also needs the support of her mother until she stabilises. It is Sonia’s objective to ensure that her two children work in tandem and take the party forward.

Therefore, Sonia continues to be the party mentor and the queen mother as also the Leader of the Congress Parliamentary Party and the UPA chairperson. The Congress needs her now more than ever as every vote and every seat matters.