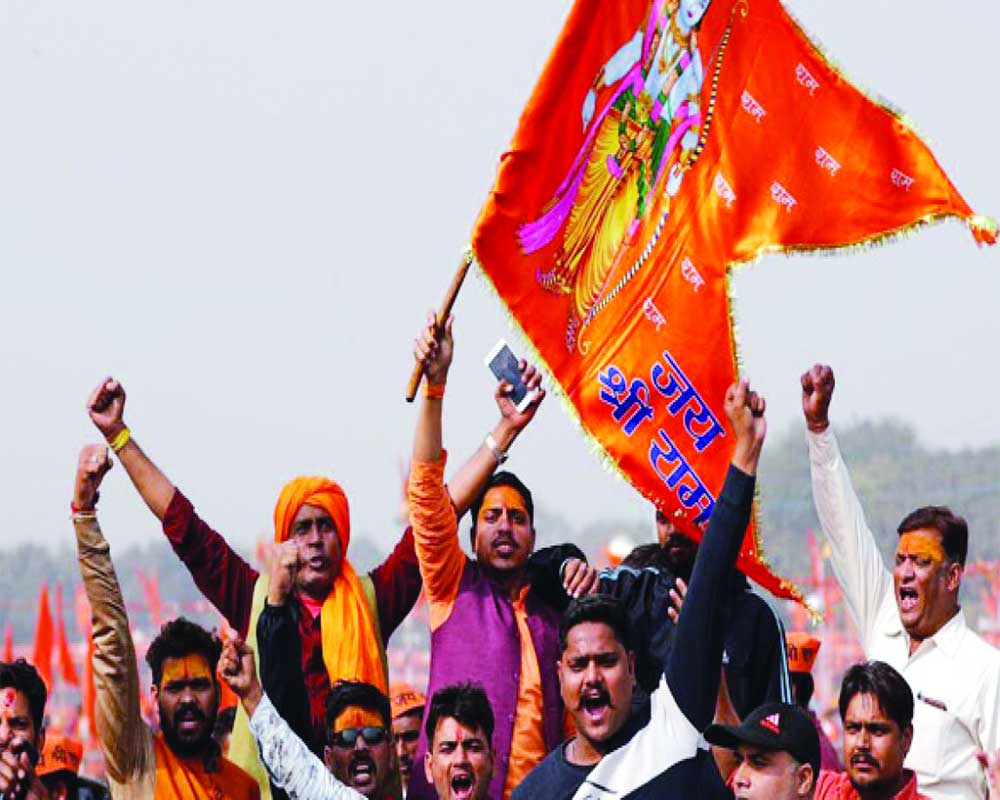 The narrative built by the conscience keepers of the nation, who complain about the threat to freedom of speech, is just another attempt to shape public discourse in India

Former Mumbai Police Commissioner and Director-General of Police, Gujarat and Punjab, Julio Ribeiro, recently expressed unhappiness with the Bharatiya Janata Party (BJP) for inducing 10 Congress MLAs to its side in Goa, deviating from its political philosophy and ethics. Recalling his friendship with Laxmi Kanta Chawla and Hit Abhilashi in terrorism-afflicted Punjab, Ribeiro says he felt the BJP would uphold “a different type of politics.”

He himself “never voted for the BJP because the general run of minority thinking is that it is an exclusively Hindu party.” What a strange political orthodoxy to espouse. However, he explains, “My Hindu ancestors in Goa were converted by the Portuguese more than four centuries ago. Since then, we have become a minority in our own country and our vote goes to those who will protect our culture and identity.”

The officer misses the deep introspection this should have triggered. He does not say if his ancestors converted out of attraction towards the faith of the new conquerors or out of fear to escape the cruel Inquisition. Historical evidence suggests it was the latter. Did the new converts in Goa feel inferior to the White invaders, and does the sense of being “a minority in our own country” originate with those tyrants? Or was it vis-à-vis the British, who dominated India until 1947, though Portugal retained its Goan colony till India expelled it in 1961?

Obviously, this refined sense of minorityhood began with independence in Hindu-majority India, possibly due to subtle mentoring by the outgoing colonial masters. Unlike Jinnah and the Muslim League, Christians did not demand a separate homeland but the church did eye and continues to eye large tracts of India as a Christian lebensraum. The church has an acute political sense and has instilled deep psychological separatism in the minds of its flock. Priests openly suggest which party to support during elections, a diktat followed scrupulously. Hence, though Hindus celebrate diversity and pose no threat to anyone’s culture or identity, a minority vote bank has been created for political bargaining.

Simultaneously, 49 self-styled conscience keepers of the nation (film-maker Mani Ratnam later backed out) wrote to Prime Minister Narendra Modi (July 23) demanding an end to the “lynching of Muslims, Dalits and other minorities.” Projecting the alleged lynching as a routine affair, they demanded that the offence be made non-bailable, which means that anyone accused of a crime can be jailed without bail until the courts take up the matter. This is too clever by half.

In recent times, allegations of Muslims being forced to say Jai Shri Ram have proved false on police investigation. Yet, the authors of this inchoate letter plead they should not be branded as anti-Government when they exercise free speech. The wide dissemination of their letter proves that free media and free speech are blooming in India. Interestingly, one of the signatories was convicted of sedition in 2010 and is on bail during pendency of his appeal.

The senior police officer and 49 eminences (minus one) are part of an ecosystem unique to India. The Hindu majority is dubbed as communal and demonised; vicious propaganda is spread against it within the country and in the West (mainly London, Washington and UN bodies), even as the “conscience keepers” are embedded in Government structures in India or receive other forms of State patronage, if not both (foreign awards are separate). However, in recent years, the narrative is bringing diminishing returns as Hindus shun political formations that demean them. Its demise abroad is a matter of time, thanks to Western economic decline.

The open letter is an attempt to extend the shelf-life of their false narratives. So selective is their truth that they kept a deafening silence when separatist leaders in the Kashmir Valley quietly sent their offspring abroad to study, work and settle down, while exhorting poor families to send their wards to pelt stones at security forces. Being part of the same ecosystem, this “Lutyens extended family” was aware of the truth, but kept quiet as teenagers bunked school to needle security forces that were compelled to retaliate — all aimed at showing the world that the Indian state is keeping Kashmir by force.

Despite ignoring the truth in Jammu & Kashmir, these eminences cringe from accepting the anti-national tag. They profess compassion for the suffering multitudes but have never said a word in support of the Kashmiri Pandit community which was driven out of the Valley in the winter of 1989-1990. Later, they shamelessly blamed the then Governor Jagmohan, who arrived in Srinagar on the morning of the exodus and was powerless to prevent it.

The signatories have never spoken up for tribal victims of Naxal terror but lionise  “urban naxals” as human rights crusaders. They maintained silence when calls to dismember India rang out in the heart of the capital and showed more compassion for Ajmal Kasab, who perpetrated unspeakable horror in Mumbai in 2008 and for Afzal Guru, mastermind of the attack on Parliament in 2001.

In West Bengal, the last bastion of secular-minority irredentism, the Chief Minister ordered imprisonment of those chanting Jai Shri Ram; violence was unleashed during the Panchayat elections in 2018 and the Lok Sabha elections in 2019; students were fired upon in Daribhit High School for demanding a teacher of English and computers; temples were vandalised in Kaliachak, Deganga, Baduria and Raniganj. There have been many episodes of violence against BJP workers, but not one eminence called the Chief Minister or Trinamool Congress (TMC) workers to account.

In July 2019, a temple was vandalised in Chandni Chowk in the heart of the capital; public anger ensured that the incident could not be hushed up. But the “Lutyens united family” remained unfazed. Its greatest moment came in September 2018, when the Supreme Court ruled that women of all ages could enter the Sabarimala Temple, breaking a centuries-old restriction on women of a certain age group. Despite a spontaneous #Ready-to-wait movement, non-believers egged on by Kerala Chief Minister Pinarayi Vijayan tried to gatecrash the temple precincts to humiliate the devotees.

We thus see a narrative of “majority oppression” coupled with strong advocacy of everything Hindus consider unfair and unjust. For these stalwarts to complain of threats to their freedom of speech is just another perversion of the public discourse in India.