Dynasts slug it out to defend Maha forts

Dynasts slug it out to defend Maha forts 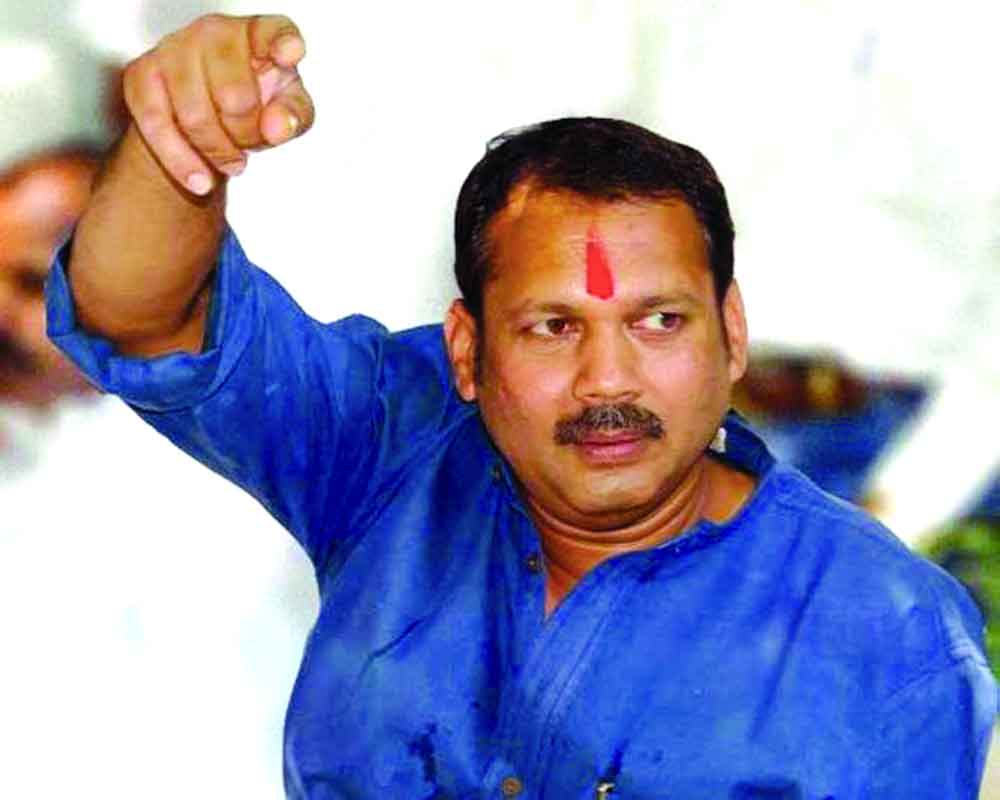 More than half a dozen prominent dynasts — including Maratha warrior Chhatrapati Shivaji’s direct descendent Udayanraje Bhosale and NCP chief Sharad Pawar’s daughter Supriya Sule — are slugging it out to retain their hold over their respective bastions, as Maharashtra witnesses fierce contests in a majority of the 14 constituencies that go to polls in the third phase of the Lok Sabha polls on Tuesday.

The BJP, the NCP and the Shiv Sena have a lot in stake in Tuesday’s polling as they struggle to retain and if possible improve their respective 2014 tallies of six, four and three seats respectively. Incidentally, the NCP had in 2014 picked up all its four seats in western Maharashtra — of which polls are scheduled in eight constituencies on Tuesday.

The 14 constituencies that are going to polls in the third phase of polling are: Jalgaon, Raver, Jalna, Aurangabad, Raigad, Pune, Baramati, Ahmednagar, Madha, Sangli, Satara, Ratnagiri-Sindhudurg, Kolhapur and Hathkanangale.

The BJP may have been using Gandhi-Nehru dynasty as a stick to beat up the Congress with for years on end, but dynasty is a watchword for all political parties — including the Amit Shah-led party — in Maharashtra. It may come as a surprise to many, but fact remains that there are at 35 dynasts in the Lok Sabha poll fray in the State. In Tuesday’s polls, there are at least six prominent dynasts in the fray.

Being the third generation dynasts contesting the polls, Parth Pawar and Dr Sujay Vikhe-Patil lead the pack. While Parth Pawar is the grand nephew of NCP chief Sharad Pawar and son of Maharashtra’s former deputy Chief Minister Ajit Pawar, Sujay is the son of the leader of the Opposition in the Maharashtra Assembly Radhakrishna Vikhe-Patil of the Congress and grandson of late Balasaheb Vikhe-Patil, who was a Minister in the Atal Bihari Vajpayee Government.

With Sr Pawar out of the fray, Parth is now contesting from Maval constituency in Pune district, while Sr Pawar’s daughter Supriya Sule is re-contesting from Pawars’ home constituency of Baramati in Pune. Maval is going to polls in the fourth and final elections on April 29.

Baramati, the home turf of the Maratha leader from where Sharad Pawar had won six times, his nephew Ajit Pawar once and Supriya Sule twice in the past, has a prestigious battle ground this time around, especially after Shah went town as early February this year, when he announced in Pune that his party wanted to win as many as 45 seats - including Baramati -in Maharashtra.

Speaking at a meeting of party workers and leaders from Pune, Shirur and Baramati Lok Sabha constituencies, Shah had said: “No one will accept our victory if our alliance wins less than 45 out of 48 seats in the state. The 45 seat winning tally is something that can be cherished only if the BJP wins the Baramati seat.”

Pawar’s daughter Supriya Sule is taking on Kanchan Kul in Baramati which is one of the two seats after Mumbai North-Central constituency where a direct woman-to-woman contest. Kanchan is the wife of Rahul Kul, sitting legislator of Mahadev Jankar’s Rashtriya Samaj Party (RSP).

Notwithstanding Shah’s claim about bagging the Baramati seat, Supriya has a distinct edge over Kanchan and her victory is a foregone conclusion.

In the neighbouring Ahmednagar, there was a lot of drama before the nominations were finalised by the Congress and BJP. Sujay Vikhe-Patil, whose father Radhakrishna Vikhe-Patil is the leader of the Opposition in the Maharashtra Assembly, resigned from the Congress and joined the BJP in a development that embarrassed his father and proved to be a setback for the Congress.

Having been in touch with him through its senior Minister Girish Mahajan for more than two months before the announcement of Lok Sabha polls, the BJP succeeded in wooing the 37-year-old Sujay, a practising neurosurgeon.  After Sujay quit the Congress to join the BJP, his father and senior Congress leader Radhakrishna Vikhe-Patil came under a lot of pressure to resign from his post as   leader of the Opposition in the State Assembly.  However, Sr Vikhe-Patil stood his ground.

In the neighbouring Satara constituency, Chhatrapati Udyanraje Bhosale - who is the 13th descendent of Maratha warrior Shivaji Maharaj, is seeking re-election for his third term. (Satara was the capital of Shivaji.

As a scion of Shivaji, Udyanraje Bhosale is extremely popular in Satara, where he is locking horns with the Shiv Sena’s Narendra Annasaheb Patil.

Ratnagiri-Sindhudurg is the stronghold of Shiv Sena’s Chief Minister Narayan Rane and his family Rane’s son Nilesh Rane had bagged this seat in 2009, defeating Sena’s Union Minister Suresh Prabhu. However, the Sena recaptured in 2014 when Vinayak Raut won, but in 2017 Rane floated the Maharashtra Swabhiman Party (MSP) and allied with the NDA.

Unable to get the BJP’s nod to put up Nilesh as candidate, Sr Rane has fielded his son Nilesh Rane as MSP candidate against Congress’ Navinchandra Bandivadekar, who was embroiled in a controversy for alleged links with the right-wing outfit Sanatan Sanstha.

In Raver, Raksha Khadse, daughter-in-law of senior BJP leader Eknath Khadse is slugging it out against Congress candidate Ulhas Patil.

It may be recalled that on June 4, 2016, Khadse had resigned from his post as the State Revenue Minister over irregularities in the purchase of a plot of land at Bhosari in Pune district.

Though Maharashtra’s Anti-Corruption Bureau (ACB) has given a clean chit to him in the alleged Pune land scam case, Khadse continues to be in political wilderness.

The NCP-controlled Madha, from where Sharad Pawar had been elected to Lok Sabha on 2009, is witnessing a bitter political battle.

After he backed out of the contest from Madha constituency, Sr Pawar wanted sitting NCP MP and his close aide Vijaysinh Patil to contest the Madha seat. However, an ambitious son Vijaysinh Mohite Patil staked claim for this seat. Realising the NCP would not nominate him from Madha, Ranjitsinh quit and joined the BJP in the hope of getting a Lok Sabha ticket to contest the Madha seat.

On its part, the NCP Sanjay Shinde - who is the brother of MLA Babanrao Shinde and also the president of Solapur Zilla Parishad--as its candidate against Ranjitsinh from Madha constituency.

Sanjay Mandlik, son of Independent MP Sadashivrao Mandlik, is contesting from Kolhapur on a Shiv Sena ticket,   while the Sena has fielded Narendra Patil, son of former  MLA Anna Saheb Patil from Satara.

In the neighbouring Marthawada where the polling was over in the first two phases, former Chief Minister Ashok Chavan was another prominent dynast. Ashok Chavan, who has been re-nominated by the Congress from Nanded constituency, is the son of late Congress leader and former Union Home Minister S B Chavan.   Pritam Munde, daughter of late senior BJP leader Gopinath Munde, re-contested the polls on a BJP ticket from Mundes’ home constituency of Beed against the NCP’s Bajrang Sonawane.

In the politically significant constituency of Osmanabad in Marathawada where the polling was over April 18, NCP’s Ranajagjit sinh P Patil took on his cousin and Shiv Sena nominee Omraje Nimbalkar.

Ranajagjit Sinh is the son of Maharashtra’s senior minister and Sharad Pawar’s close confidant Padamsinh Patil. Padamsinh is one of the nine accused others in the much-discussed murder case of 2006 in which Congress leader Pawanraje Nimbalkar and his driver Samad Abdul Wahid Kazi at Kalamboli, near Panvel, were shot dead on February 3,2006.