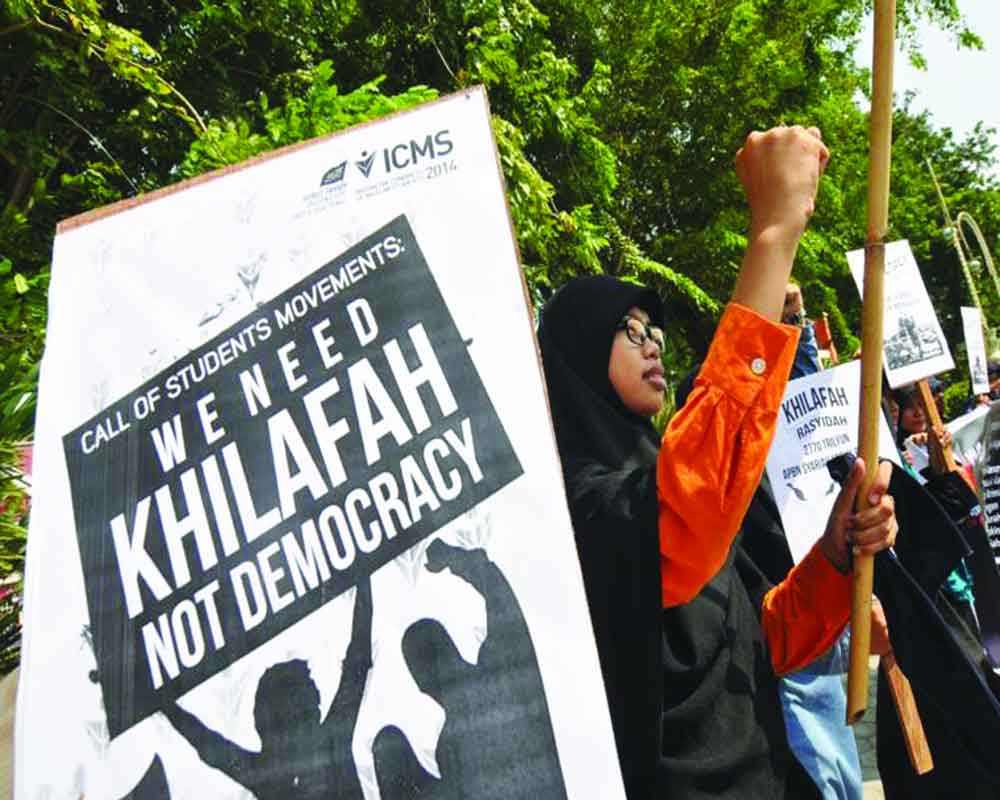 Hizb-ut-Tahrir’s presence in more than 50 countries is a matter of grave concern. Although Hizb-ut-Tahrir has not yet set up its office in India, its underground activities in our neighbouring countries are set to pose challenge to safety and security of Indians

Following India’s decision to revoke the special status of Jammu & Kashmir, there were protests by anti-India elements outside the India House in London during the Independence Day celebrations. One such protest was organised by Hizb-ut-Tahrir or “the Party of the Liberation”, a radical Islamist group which calls for the establishment of the caliphate in the Muslim world with a view to uniting the Muslim ummah.

Founded in 1953 by Muhammad Sheikh Taqiuddin-al-Nabhani, a radical activist from Haifa (Jordan), this group aims at establishing an Islamic state where all aspects of human life would be guided by Sharia. Hizb-ut-Tahrir is of the opinion that restoration of the caliphate, with all Muslims living in accordance with Sharia, is the solution to the problems in the West Asia (Middle East). The establishment of an Islamic state, according to Hizb-ut-Tahrir, would be in three stages. In the first stage, the organisation would educate and indoctrinate its ideology to the common people; in the second stage, it would focus on spreading its ideas among those who hold power in the government, military and the civil services; and in the third stage, it would proceed to establish the Islamic state. The Islamic state, according to Hizb-ut-Tahrir, would be ruled by a caliph or khalifah. The caliph would appoint the amir and the military head who would lead the jehad activities against non-Muslims.

Although Hizb-ut-Tahrir advocates a strict interpretation of Islam, it does not oppose modern technology, and rather makes extensive use of the internet and social network sites to spread its message. It advocates indoctrination in public places, hoping to change paradigms and emotions so that “people (will) behave in ways that will not anger Allah”. While Hizb-ut-Tahrir promotes the concept of caliphate, it does not recognise the so-called caliphate created by the ISIS, which has been on the run after its defeat in Iraq and Syria.

Distribution of CDs containing jehad and radical Islam literature is one of the methods Hizb-ut-Tahrir follows to target people. To attract the youth into joining it, Hizb-ut-Tahrir has a well-maintained website, containing message, literature and other information. In countries where the group is not banned, Hizb-ut-Tahrir activists freely distribute literature such as The Institutions of State in the Khalifah, both online and in public places. They also organise seminars and public discussions utilising various open fora. According to US online Journal CTX, Hizb-ut-Tahrir is slowly increasing its social capital by keeping away from overt acts of terrorism while luring the educated youth. The structure of Hizb-ut-Tahrir makes it really difficult to arrive at the real number of its members. It is estimated that Hizb-ut-Tahrir has a wide base of one million members in 50 countries, including the UK, Central Asia, Iran, Iraq, Algeria, Sudan, Yemen, Pakistan, Bangladesh, Indonesia and Jordan. Due to its involvement in coup attempts and anti-government acts, the outfit has been banned in about 20 countries, which include Egypt, Jordan, Saudi Arabia, Turkey, Uzbekistan, Pakistan, Bangladesh, China and Russia. In addition, the outfit has a strong social media network. In the USA alone, it has more than 28,000 followers on the Facebook.

In South Asia, Hizb-ut-Tahrir has a significant presence in Pakistan. It was banned in the country in November 2003 on charges of its links with several terror plots, including that to kill former President of Pakistan Pervez Musharraf. According to available reports, Hizb-ut-Tahrir has made three attempts to penetrate the Pakistan Army in the last decade. This information came to light when Brigadier Ali Khan and four other Army officers were arrested for their links with the outfit. Despite this, Hizb-ut-Tahrir activists were reportedly seen in the garrison areas of Pakistan, openly speaking to military personnel. Hizb-ut-Tahrir’s objective is to bring military personnel, intellectuals and the elite under one umbrella with the aim of replacing the government with a caliphate. Although the party claims to be working for the entire ummah, it started operating in Pakistan by declaring the nation as “Wilayah” or place suitable for assumption of power. Hizb-ut-Tahrir is convinced that as a seat of Khilafat, Pakistan has the potential to unite the Muslim ummah and extend the message of Islam to the whole world, as per its manifesto. In Bangladesh, though it was banned in 2009, Hizb-ut-Tahrir has been carrying out anti-state, anti-government, anti-India and anti-US activities there. It is significant to note that Hizb-ut-Tahrir has not only been able to penetrate the state-run Dhaka University, Rajshahi University and Chittagong University but also some prominent private universities that are affiliated to Western universities. Hizb-ut-Tahrir has also been involved in mobilising sections against the Sheikh Hasina regime and is also suspected to have been linked to the Bangladesh Rifles mutiny in 2009.

Many Hizb-ut-Tahrir activists were seen distributing leaflets calling upon the people of Bangladesh to rise against India. The leaflets are aimed at provoking the Bangladeshi people: “You have been the victims of Indian aggression for decades. The enemy state killed your officers in Pilkhana. She built the Farakka Dam; she deprives you all your rightful share of water from the common rivers and kills your brothers and sisters in the border. And your current rulers have failed to stand up to the Indian aggression against you. There exists only one way of resisting the enemy — establishing the Khalifah state… And we have the action plan ready to regain India as a Muslim land under the Islamic rule which is the only true assured way of stopping Indian aggression permanently.”

There are several means to collect funds for activities of Hizb-ut-Tahrir. These include private donations, through public campaigns and even government subsidies. Donations are primarily raised in London, Europe, the West Asia and Pakistan. Following allegations that the Pakistan envoy to Bangladesh, Mohammad Mazhar Khan, had laundered money for Hizb-ut-Tahrir and other Islamist groups in Bangladesh, the envoy was recalled, according to a report in the Counter-Extremism Project. Besides, the Hizb-ut-Tahrir is funded by wealthy sheikhs from Saudi Arabia and other Gulf nations. Interestingly it received the British Government’s aid to run British Foundation till its nefarious activities came to London’s notice.

Hizb-ut-Tahrir has since turned out to be one of the most organised and dangerous radical groups. In the UK, Hizb-ut-Tahrir operated on the university campuses without any restriction by the authorities. Reportedly, the campus of the University of Westminster became a major radicalising area for the youth, some of whom later joined ISIS. Prominent among them was Mohammad Emwazi, aka late “Jihadi John”.

Its presence in more than 50 countries makes itself a matter of grave concern for them. According to its website, Hizb-ut-Tahrir organised a demonstration at Batla House in Delhi on June 6, 2010, to protest Israel’s alleged atrocities against Palestinians. One important target of Hizb-ut-Tahrir in West Asia is Israel. Its current global leader Ata Abu Rishta justifies killing of Israeli Jews because he says they are occupying Islamic lands. An article in Hizb-ut-Tahrir’s magazine Al-Waie June, 2001, justified suicide bombing against Israel. In another magazine of Hizb-ut-Tahrir called Al-Fajr in 1988 said hijacking of Israeli planes and killing of Israelis citizens on board was permissible.

According to the CTX journal, Hizb-ut-Tahrir has an armed wing called Harkat al  Muhajirin fi Britaniya that is training its cadres in chemical, bacteriological and biological warfare.

Although Hizb-ut-Tahrir has not yet set up its office in India, its underground activities in our neighbouring countries is a matter of serious concern. Writing in the “Current Trends in Islamist Ideology”, eminent commentators Houriya Ahmed and Hannah Stusrt quoting a source have claimed that “Hizb-ut-Tahrir (Bangladesh) has a dedicated India committee, similar to its Bangladesh and Pakistan committees, which focuses on recruiting Indian nationals presently studying in UK universities. Once these student activists finish their studies, the party hopes they will head back to India to continue Hizb-ut-Tahrir’s agenda there.” It is imperative that the Indian authorities keep a close watch on these developments and initiate necessary steps.

(The writer is associated with the Institute for Defence Studies and Analyses and is the co-author of the books — ‘Militant Groups in South Asia’ and ‘Pakistan Occupied Kashmir: Politics, Parties and Personalities’)